Chris Gutierrez's Hispanic heritage laid the foundation for hard work and doing whatever it takes to support his family.
By Thomas Gerbasi, on Twitter: @TGerbasi • Oct. 14, 2020

If the young Chris Gutierrez had his way, he would be playing soccer somewhere around the globe, kicking that ball around instead of scoring with the kind of kicks to the leg that ended his May fight with Vince Morales.

Now knowing his history on the pitch, it’s easy to understand how he got so good with his kicks in MMA, and he should take solace in the fact that he’s competing on the highest level of this sport. It’s just a reminder that there’s no shame in not being able to take his game to the next level to become a pro soccer player.

“I could tell you a lot of things,” Gutierrez begins in response. “But telling you I was a slouch in soccer, I'd be lying.”

We both laugh. Okay, let me re-phrase that. Maybe he just peaked too soon.

“Exactly,” he said. “I like to think so. My brother made it on a semi-pro team down in Ecuador and when we went down to Colombia, we got scouted and stuff like that, but we were too young. I was 14-15 at the time, and my brother was 15-16, so we were way too young.”

All’s well that ends well for “El Guapo,” a bantamweight on the rise who has gone 3-1-1 in the UFC since his debut in 2018. It’s been a good run thus far for the 29-year-old, who is coming off an August draw with Cody Durden, but the work’s not done yet, and that work ethic is something he learned from his parents Jorge and Gladis. 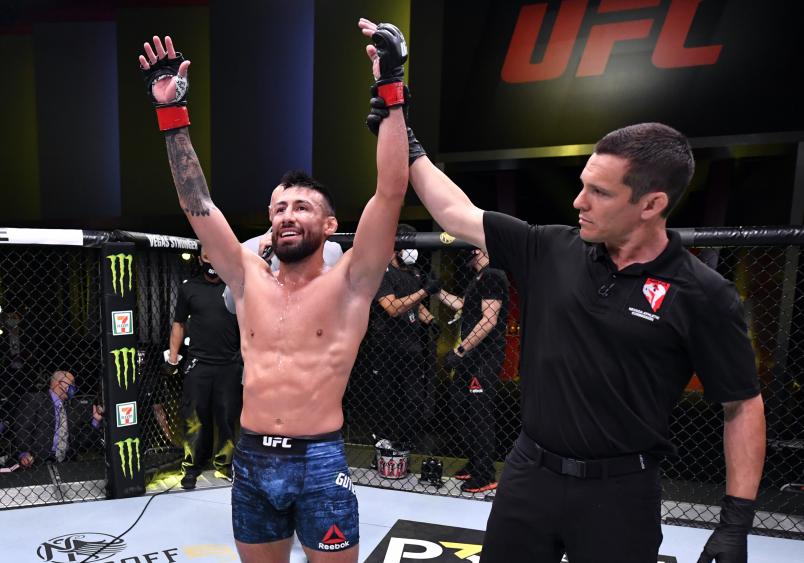 Chris Gutierrez celebrates after his TKO victory over Vince Morales in their featherweight fight during the UFC Fight Night event at UFC APEX on May 30, 2020 in Las Vegas, Nevada. (Photo by Jeff Bottari/Zuffa LLC)

“You know what's ingrained in a Hispanic from the moment you are born?” asked Gutierrez. “It's family and love. That love within the family is ingrained in you and I get warm talking about it because that's the only thing we really have in this life that's truly ours. My parents did everything they could to give us a better life. I've seen my dad work two or three jobs, 16-18 hour shifts. My mom was cutting hair at home, making food to go sell. They never came to our soccer practices because they were too busy out trying to make a life for us.”

Jorge, who hailed from Colombia, and Gladis, from Guatemala, met in Miami and started a family. Things weren’t easy. Far from it, as the couple tried to make ends meet and provide a better life for their kids.

“They went through a lot of hatred for being a certain color,” said Gutierrez. “My dad always got the s**ttiest jobs and sometimes he wouldn't even get paid because he would be threatened. They would say, 'You being here is payment enough.' You have to do whatever you have to do to make a dollar to feed your family at the end of the day.”

For Gutierrez and his brother, they saw what their parents were going through, and they were determined that soccer would be the way to give back to them and take them out of the situation they were in.

“As a kid, your dream is to make it in a sport so you can help your parents,” he said. “We grew up playing soccer. It's instilled in your DNA. You see your parents struggling, so you're like, man, I know they're trying to give me a better life. And you realize that you don't want to see your parents suffer. My feet eventually can help me make it to a select team or a club team and I can make money so I can, in turn, help my family not struggle anymore.” 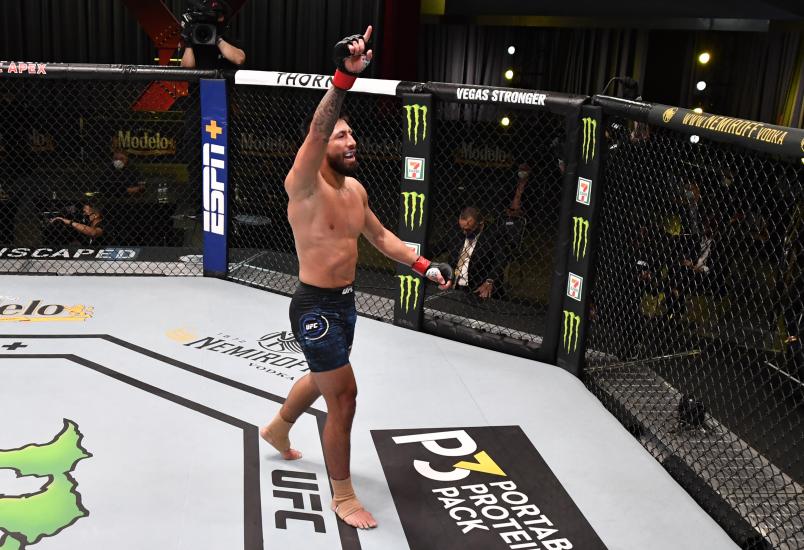 In this handout image provided by UFC, Chris Gutierrez celebrates after his TKO victory over Vince Morales in their featherweight fight during the UFC Fight Night event at UFC APEX on May 30, 2020 in Las Vegas, Nevada. (Photo by Jeff Bottari/Zuffa LLC via

Soccer wouldn’t be that way out. Fighting would be. Gutierrez began training at 16. By 22, he had turned pro, which he admits came as a surprise to his mom and dad at first. But as Gutierrez realized, there were seeds planted early on.

“It was a surprise, but not really because I got into a lot of streetfights,” he said. “I was always the rough child, and I would get beat up but I would still be coming back for more. It's kinda scary, but to a point it's kinda fun. You become a product of your environment. I'm not saying I came from the worst place in the world, but it wasn't a walk in the part either. I got bullied, I had people punk me out of my seat and tell me to sit on the steps of the school bus. Then I'd get home and tell my parents and my dad would get mad because I let that happen.”

The next day, Gutierrez would go to get some get back from the bully of the minute. Having that fighting spirit ultimately paid off.

“To be where I'm at and be able to help my parents a little bit, it means a lot,” said Gutierrez. “And I'm sure to them it means the world that they raised their kids right.”

It should, and Gutierrez’ journey should be a reminder, especially during Hispanic Heritage Month, that no one should ever forget who came before them. Chris Gutierrez certainly doesn’t.

“You should always embrace who you are and what you are,” he said. “I love who I am, I love what I represent, and you have to give respect to the people that came before you, because they were the ones who paved the way for you to be where you're at. To me, life is like a big blueprint. You leave behind a legacy for others to continue building off of. To give respect to the people before us, that's a big thing because 50 years from now or a hundred years from now, I will be an ancestor for somebody else and to be able to give respect to the things I've tried to do and I've accomplished, that's a beautiful thing and that's a great thing.”