His sights on the belt, Benavidez back and ready to rock

They are the words Joseph Benavidez always expected to hear, but after 18 months on the sidelines, he still appreciates hearing them.

“I always knew it was a matter of time, but it was something I waited for,” said the number one flyweight contender, who makes his return this Saturday in Chicago against No. 5-ranked Sergio Pettis. “And not the exact words, but the idea of that is really what kept me going through everything.”

“Everything” was the torn ACL that put a momentary halt to a career heading towards a third shot at the 125-pound crown held by Demetrious Johnson. Winner of six in a row, Benavidez was on the right track to erasing the memory of the knockout loss in his rematch with “Mighty Mouse” and getting a crack at redemption – and the title – after a pair of defeats to the pound-for-pound king. But his knee had other plans, and everything stopped.

In one way, it was a way out of what the New Mexico product calls “A kind of purgatory,” as he knew it was going to be a hard sell for a third fight with Johnson, despite the fact that he nearly beat him in their first bout in 2012 before losing a split decision.

“You always have to take the positives out of it, and there are a ton of positives – physically, mentally, everything,” he said of his year and a half out of the Octagon. “And one of them was, oh wow, the division is in kind of a standstill, so maybe while I’m gone so long, it will totally flip upside down and all these things will happen and I’ll come back to a totally different division.”

Benavidez laughs, about to deliver the left hand over the top after setting things up with a stiff southpaw jab.

“And then I come back, and to tell you the truth, I think it’s worse,” he said. “Nothing’s happened, so it’s worse. There’s been no real progress. The champ’s defended his belt, but there’s been no changes, no mix up, nothing drastic that I thought would happen. So I’m pretty much coming back to a division that’s at more of a standstill. Is it because I haven’t been fighting? I’m the number one guy, so maybe I can come in and give it the mixup that it needs.”

The standstill Benavidez talks about can be summed up in one word: dominance. In the time since Benavidez defeated Henry Cejudo in December 2016, Johnson has added three more successful title defenses to his ledger, setting a UFC record for such a feat. And while there is plenty of veteran talent at 125 pounds and some rising stars making their presence known, no one has come close to beating the champ. And Benavidez believes he’s the only one who has the goods to do it.

“I’m the closest guy to beat Demetrious,” he said. “We had a split decision and hopefully after this fight it will be seven wins in a row. So maybe that’s what has to happen. 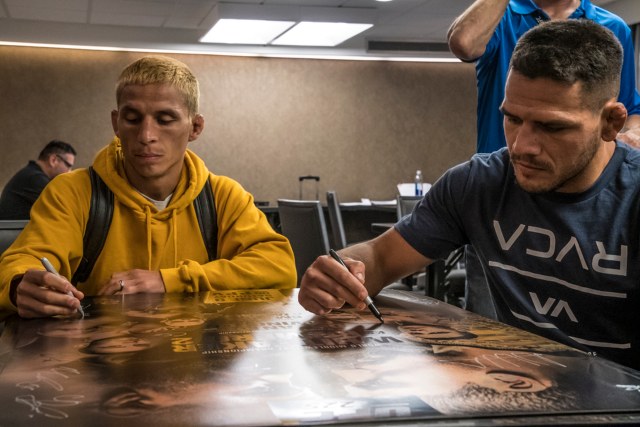 “I feel like with our division there has to be order,” Benavidez continues, noting that while the division may not have the star power of other weight classes, the flyweights still have plenty to offer. “We only have the skill and the next best guy, the guy with the most wins. So there’s no reason why the best two guys shouldn’t be fighting every time. I think five fights with me and Demetrious are all gonna be more exciting and more watched than a fight with him and some of the fighters he’s been against. When you think of the flyweight division, you think of Demetrious and you think of me. We’re the ones that started it and I think we’re the most notable ones in the division.”

He may be right, but first there’s Pettis, one of those aforementioned rising stars who, at 24, is still getting better. Benavidez, who will celebrate his 34th birthday next month, is more of a finished product, and as he returns, he knows he’s the veteran with the experience and skill set to give anyone fits. But this time, he also brings a youthful attitude to the Octagon that he picked up as he waited to strap the gloves on again.

“This is what I’ve done for 12 years, what I’ve loved, and it was taken away from me,” he said. “So when I came back, there was nothing specific, but I just missed it. And I’m a veteran in the sport, but I feel like a kid again mentally, like I’m starting over. I have the excitement of a kid but the skill, the talent and the experience of a veteran.”

And he’s still got his eyes set on that belt. Mr. Johnson, are you ready? Mr. Benavidez is.