In His Own Words - Tito Ortiz 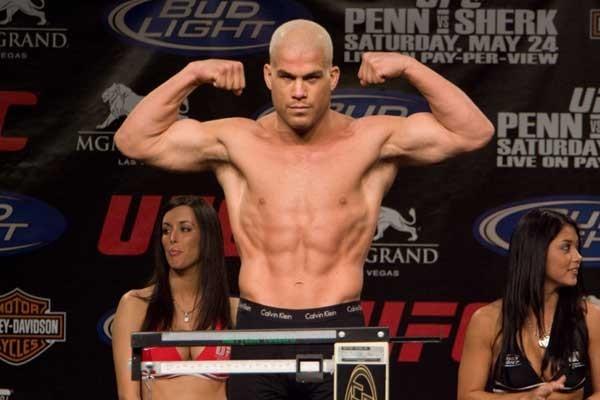 One of the most polarizing figures in mixed martial arts history, former UFC light heavyweight champion Tito Ortiz has turned into a crowd favorite again after his inspiring submission win over Ryan Bader at UFC 132 earlier this month. Now slated to face Rashad Evans in a rematch of their 2007 draw at UFC 133 on August 6th, “The Huntington Beach Bad Boy” could find himself in the title picture with a win.

As the fight approaches, we look back at one of the sport’s most visible figures in his own words.

FIRST LOOK (2003)
“I watched the Ultimate Fighting Championship and I was like, ‘these guys are crazy.’ I just couldn’t believe the stuff they were doing inside the Octagon. I was a huge fan of the movie ‘Bloodsport’ and thought, ‘wow, it finally came to America.’ It kinda surprised me. I watched a smaller man choke out bigger men left and right, and that was Royce Gracie. He introduced jiu-jitsu to the United States, and it was amazing. I didn’t understand some of the stuff he was doing, but it caught my eye really quick.”

EARLY DAYS (2006)
“At that time I was working at an adult novelty store (laughs), and I had just quit college. I was wondering what I was gonna eat the next day because I was so broke.  I was living in a small apartment, not really sure of what life was gonna bring to me.  I started training and I got the chance to fight in the UFC.  And within a year and a half I became the world champion.  It just seemed that I pushed my life to where I wanted it to be.”

THE DEBUT (2003)
“My first chance was May 30 of 1997, and I fought Wes Albritton. I was scared. I was really intimidated and I wasn’t sure exactly what could happen. He was a second-degree black belt in karate and I really wasn’t sure what to expect. What do I need to do to become the victor in my fight? Well, he was a standup fighter and I’m a ground fighter, so I used my wrestling to my best ability. From then on, I was hooked. That fight lasted 22 seconds and I think it was the building of a star. I set my mind to it, tried to achieve as much as possible, and kept working and working.”

KEN SHAMROCK I (2003)
“There were so many people saying how close the fight was gonna be, and that Ken was really tough and strong. They were just saying so much stuff and giving him so much credit that they didn’t realize how hard I worked and how good I became. At UFC 40 people saw a whole different side of mixed martial arts. They said, ‘man, you really dominated. You picked him apart.’ If he wanted to be the champ, he had to earn it. That night he sure wasn’t going to be the champ and he was not going to earn it because of all the work I put into it.”

THE TRIGGER (2000)
“Once I get locked in that cage, there has to be something in my body to trigger me and make me want to go out and inflict pain on a person. The money and everything, that's fun, but at the same time, the competition, it can work wonders for somebody to win. The feeling of losing, there's no worse feeling than that. There is a difference between Tito Ortiz in the ring and Tito Ortiz outside the ring, because once I get in the ring, the light switch turns on. It's like a red light and it's time to go as hard as I can and try to break this guy. Break him mentally, physically, his arms, his legs. Not literally, just trying to take my opponent out, because that's what his job is, to take me out. But once I step out of the ring, I'm all smiles. My job is over, and hopefully I did my job.”

ON COACHING THE ULTIMATE FIGHTER (2006)
“I’ve been a high school wrestling coach for three years when I was in junior college and I know how to coach kids and push them. I was part of Team Punishment and I was one of the coaches for it.  I helped the guys and I know what it takes to win in the Octagon – I know the different types of submissions to defend, how to use elbows, how to use knees on the feet, striking positions, clinches.  There are a lot of things that I’ve worked on that I bring to the table as a coach.  It’s kinda scary because they’re gonna be a lot better than me. (Laughs)  They’re gonna know all my secrets, but I’ll give them all my secrets.”

ON COACHING II (2006)
“I think they see the real Tito Ortiz when I am a coach and I’m around them, and not when I’m in the Octagon competing.  Those are two separate people – there’s the person that’s in there fighting for his career inside the Octagon and there’s the person who’s fighting for his life outside the Octagon who’s willing to help people out, and who’s always giving.  I’m an Aquarius to the tee – I’m always willing to give to those people who are around me; I would pretty much give my left arm for them, and I really want to see the guys on ‘The Ultimate Fighter’ excel, I want to see the guys become good fighters and great people.  I want to see them excel in life.”

RESPECT (2006)
“People have been paying more attention to all the smack talk I talk and they don’t really watch my fight game. They pay more attention to the stuff I do after the fight compared to the fights themselves.  I beat some really good guys, and it seems like every time I beat somebody, I either end their career or they don’t fight the same after the fight. Wanderlei Silva may be the only one who went on to excel.  Having fights like that and winning fights like that, I’m still young, I’m 31 years old and I feel I’ve got a solid five years left in me to compete.  The book is barely on its fifth page, and I’ve still got about another 100 pages to go.”

THE ROAR OF THE CROWD (2007)
“I don’t think there’s a word to describe it.  You’ve got to be the person in the Octagon fighting when it happens.  It’s overwhelming almost.”

THE APPEAL OF TITO ORTIZ (2007)
“I think it really comes down to the fact that I try to entertain.  That’s my job.  When I first started fighting in the UFC, it really came down to entertainment.  A fight was a fight, but there was entertainment value.  When I stepped into the Octagon, I gave my whole heart and soul and it’s very personal to me.  I take training very seriously, so when the fight comes about, I have no doubts in my step.  I make sure that I’m fighting 100%, and when Tito Ortiz fights, it’s an event in itself, so I try to entertain and try to beat down my opponent.  I try to make it exciting for the fans that buy pay-per-views and the fans that are sitting in the front row, all the way up to the fans in the nose bleed seats.  They’re always gonna get a great fight out of Tito Ortiz, no matter what.  I just don’t take this as a payday – this is very personal to me.”

GETTING “IT” (2007)
“Those guys who are just here to fight, they’re the ones that are gonna be forgotten. I’m building a foundation, I’m here to build a castle, and I want to make sure I’m the king standing in that castle.  You see a lot of fighters, all they care about is fighting.  They’re gonna come in and say ‘oh, I’m gonna knock the guy out and that’s my job.’  That’s all they care about.  To me, there’s entertainment value involved.  You’ve got to make sure you’re known beyond just the fighting.  You have to do the extra stuff.  I do a lot of charity work, and to me, it’s not just fighting.  If it was just about fighting, I would have kept my mouth shut and just fought.  But I want to go on to other things.  Being a personality and being an inspiration to a lot of kids who want to find role models to look up to is important to me.  Maybe a lot of the things I do aren’t role model-type stuff, but I speak my mind no matter what.  I came up from nothing, I’ve tasted dirt before and I never want to taste dirt again, so I have to make sure I’m a name that’s recognized always and forever in the sport of mixed martial arts.”

FIGHT NIGHT (2003)
“Mindwise, as soon as I get in the arena, that’s when it sets the tone of ‘all right, now it’s time to fight.  Now it’s time to get serious.’ I put my running shoes on and do a light jog.  I’m warming up, hitting pads, and then it comes to the point of 10-15 minutes before the fight and I always vomit and tears will come out of my eyes.  I don’t know what the reason is. It’s just emotion.  People see me fight and I fight like no other fighter in the UFC.  I have so much emotion and so much aggression.  I never stop moving.  In my mind, it’s just don’t stop moving until the match is over and you’ll have no problem with it.  That’s the whole idea.  So when I step in there and you see the ferocity I go in there with, no one’s gonna stop me.  Whoever’s standing on the other side of the Octagon, I have to go through that person because I’m fighting for my family, my fans, and that’s what really matters.”