His Legacy's Secure, but Minotauro Nogueira is Not Finished Yet

"I remember him being very resilient. He got taken down and took a lot of shots, but every time
he went down, he got back up and recuperated." - Minotauro Nogueira 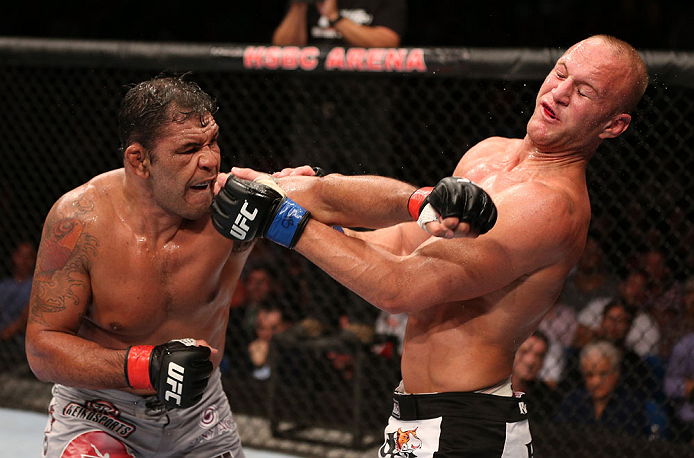 What motivates a legend? In combat sports it can be any number of things: titles, money, fame, glory. Or in the case of former PRIDE and UFC heavyweight champion Antonio Rodrigo “Minotauro” Nogueira, there’s just the idea that there is nothing else in the world that gets him going quite like being in the fight game.

“I love what I do, and I love being around my team,” said Nogueira. “They are what motivate me to train every day.”

To some, such a statement could ring false, but not from Nogueira. Simply put, the Bahia, Brazil, native has been a training partner and mentor to countless fighters, and an idol to even more. And despite his success in the sport over the last 14 years, it may be this role that means the most to him, even if it’s something he never could have dreamed of when he turned pro in 1999.

“I think we have an idea of what we can accomplish but can't imagine the proportion of it,” he said. “But I am happy to be able to do what I love to do.”

Recently, Nogueira had the opportunity to see his fighting worlds intersect once again as he went through a second stint as a coach on The Ultimate Fighter, following his appearance on TUF 8 by coaching local fighters on TUF Brazil 2.

“It was cool,” he said of the TUF Brazil 2 experience. “My team won TUF in the US and it was great to come do the show in my country, with many fighters I already knew and who I had already seen fight, and being with my team was great.”

Nogueira coached both fighters in this Saturday’s final in Fortaleza, William Macario and Leo Santos, but he won’t be cornering either combatant because he’s got business to take care of in the UFC on FUEL TV 10 main event against his coaching rival, Fabricio Werdum. It’s a rematch of a 2006 PRIDE bout won by Nogueira via unanimous decision.

“I remember him being very resilient,” said Nogueira of the first fight with Werdum. “He got taken down and took a lot of shots, but every time he went down, he got back up and recuperated. He showed a lot of heart and always came back and kept fighting. It was a cool fight, it was interesting.”

Since then, the fighters have gone along with their careers, traveling vastly different paths. A year after the bout, Nogueira found himself in the UFC, where he won the interim heavyweight title against Tim Sylvia in 2008 but then battled injuries and suffered some key losses, making many wonder whether the 37-year-old had been in too many wars. Werdum also made it to the UFC in 2007, with his first stint resulting in a disappointing 2-2 record. After being cut, the Brazilian won three of four bouts, including a submission of the seemingly unbeatable Fedor Emelianenko in a 2010 Strikeforce match, and by 2012 he was back in the Octagon and looking better than ever in his wins over Roy Nelson and Mike Russow. Nogueira has certainly been paying attention.

“He has really worked on his striking, he has been using more kicks and knees, and he has added a lot to his game,” said Minotauro. “It's difficult for someone who comes from Jiu-Jitsu, a grappler, to become a striker, but he has improved a lot.”

Werdum’s striking has looked sharp, but Nogueira is still one of the top boxers in the division, with his 2011 knockout of Brendan Schaub proof of that. As for Nogueira’s ground game, the BJJ black belt was in top form in his last fight, submitting Dave Herman in the second round. And given Werdum’s number three ranking, a win by Nogueira could just resurrect his title hopes.

“For sure it would put me in a great position, and that is my intention; I want to be in the top 5,” he said. “My friend “Cigano” (Junior dos Santos) will fight for the belt, and I will be cheering for him, but I also want to be in the elite of the division.”

If Nogueira does make it back to the top, it would be one of the great comeback stories this sport has ever seen, and given his skill and resilience, it would be foolish to ever count him out. But if he doesn’t pick up another title belt for his collection, he can be more than content with what he’s already accomplished and what he means to the sport and its fighters. As for a fight for his own time capsule, he’s got that one already picked out.

“I think it would have to be the fight against Bob Sapp,” said Nogueira of the 2002 PRIDE Shockwave fight in which he was piledrived to the canvas multiple times by the 300+ pounder before roaring back to win by submission. “He was a giant coming in without any fear, and he had all that power and size over me, but I was able to withstand it. I was able to get through the beginning of the fight, which was complicated, and then I was able to turn the fight and win. It was unforgettable.”

Just like the fighter who left the ring with his hand raised that night.