In his 3rd main event, Stephens prefers to fight in the chaos 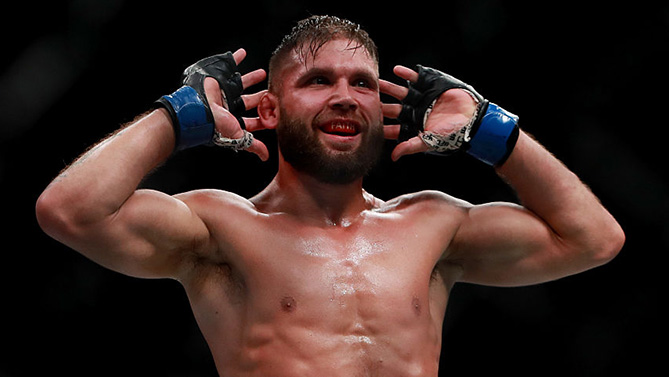 Jeremy Stephens takes on Dooho Choi in the main event at Fight Night St. Louis on Sunday live on FS1" align="center" />
Jeremy Stephens has been in Southern California for several years, but his heart will always be in the Midwest. So don’t expect the Iowa native to get rattled by the weather when he faces Dooho Choi in Sunday’s UFC Fight Night main event in St. Louis.

“I’m about to go back and get right into the mix,” he said. “In the eye of the storm is where I belong. Chaos, I do well in it.”

Truer words have never been spoken, as Stephens has made a career out of embracing the art of battle, comfortably biting down on his mouthpiece and planting his feet to throw hands in situations most would cringe at. It’s why so many are excited about the headlining bout of the first UFC card of 2018, with no one more excited than the “Lil’ Heathen.”

“One thing about me, whether I’ve won or lost inside the Octagon, is that I always come back with a new and improved,

updated version of myself. It’s like the Terminator – I just keep coming back with more advanced artillery and a little more experience under my belt and I like using that type of experience to my advantage, especially in this day and age. If you’re not growing and evolving in this sport, you’re as good as dead.”

It’s why Stephens’ last performance may have been his best. It wasn’t an explosive knockout like the ones he’s scored over the likes of Dennis Bermudez, Rony Jason or Marcus Davis, but in scoring a Fight of the Night decision over Gilbert Melendez, the 31-year-old delivered a disciplined, technical effort that saw him put brawling instincts that have cost him in his back pocket in the interest of following his game plan.

“I wanted him to quit,” Stephens said. “As far as Gilbert, trust me when I say this, I have nothing but respect for him. But when I’m in there fighting, I wanted him to quit, I wanted him to stop on the stool, I wanted him to give up and say, ‘No more.’ Credit to him, he’s a warrior. But I was gonna keep picking him apart. I didn’t even really want to knock him out. I wanted to punish him so bad that he would think about me for weeks to come. As a competitor, that’s where my head was at.”

And as he prepares to face “The Korean Superboy,” the intent is the same. Stephens is looking to leave an impression.
RELATED CONTENT: Full card preview | Cormier previews the main event | Choi: 'I fight like a beast'

“I think he’ll stand with me,” Stephens said. “That’s where his biggest advantage is, on the feet, and that’s where he does his best work. So I think he’ll be in there a little bit, but I really don’t think he’s diverse enough to really mix it up very much. If he does, I’m diverse and can fight everywhere. I can do whatever I want, when I want and how I want in this fight, and it’s going to be about who’s going to be meaner and nastier. Let’s see what happens when we mix it up, and let’s take it from there. I want this guy to break on the stool, I want him to quit between rounds. If I knock him out, fine, but what would really satisfy me is making this guy quit inside that five rounds.”

There are always submissions, and when I remind Stephens that he hasn’t scored a tap out since locking in a triangle choke on Norm Alexander in February 2007, he laughs. It’s the kind of laugh that says he’ll take an arm or a neck if they’re available, but in his world, it’s about breaking his foes in the process of getting a win. And if anyone knows how to do that, it’s a fighter with 26 Octagon bouts and more than 13 years in the pro game. That’s experience that’s tough to deal with.

“It keeps showing up,” Stephens said when asked how that experience plays into a fight. “The improvements I’m able to make, the adjustments inside of the Octagon and the veteran experience that I carry. The Fight IQ is also a little sharper and better. I know when to strike, I know when to be defensive, and I know when to be scoring big points or when to shut people down. I have psychological advantages inside the Octagon as well, and that’s something you can’t take away. You have to earn it. That’s not something you’re given. And I feel that’s going to be a huge advantage on my side.”

Does that mean that after a rollercoaster ride in the UFC, Jeremy Stephens is about to hit his prime in 2018?

“I feel like everything’s really starting to finally come together,” he said. “This is my third main event, it’s at the right time, in the right setting, with the right mindset and the right team. I’ve been taking accountability for myself and my actions and this is a fight I don’t need any extra motivation for. I don’t need anybody pushing me. I wake up excited for these types of fights, and getting to fight a young, hungry guy is fantastic. It’s gonna make for a great fight, and the fans, especially the Midwest fans, deserve it. So I’m excited to execute and put on a great show for everybody.”