Hidden No Longer, Davis is Smashing Her Way to The Top

"I think my good luck charm in there is being the underdog. But after
this fight, I'm definitely going to come more into the spotlight." - Alexis Davis 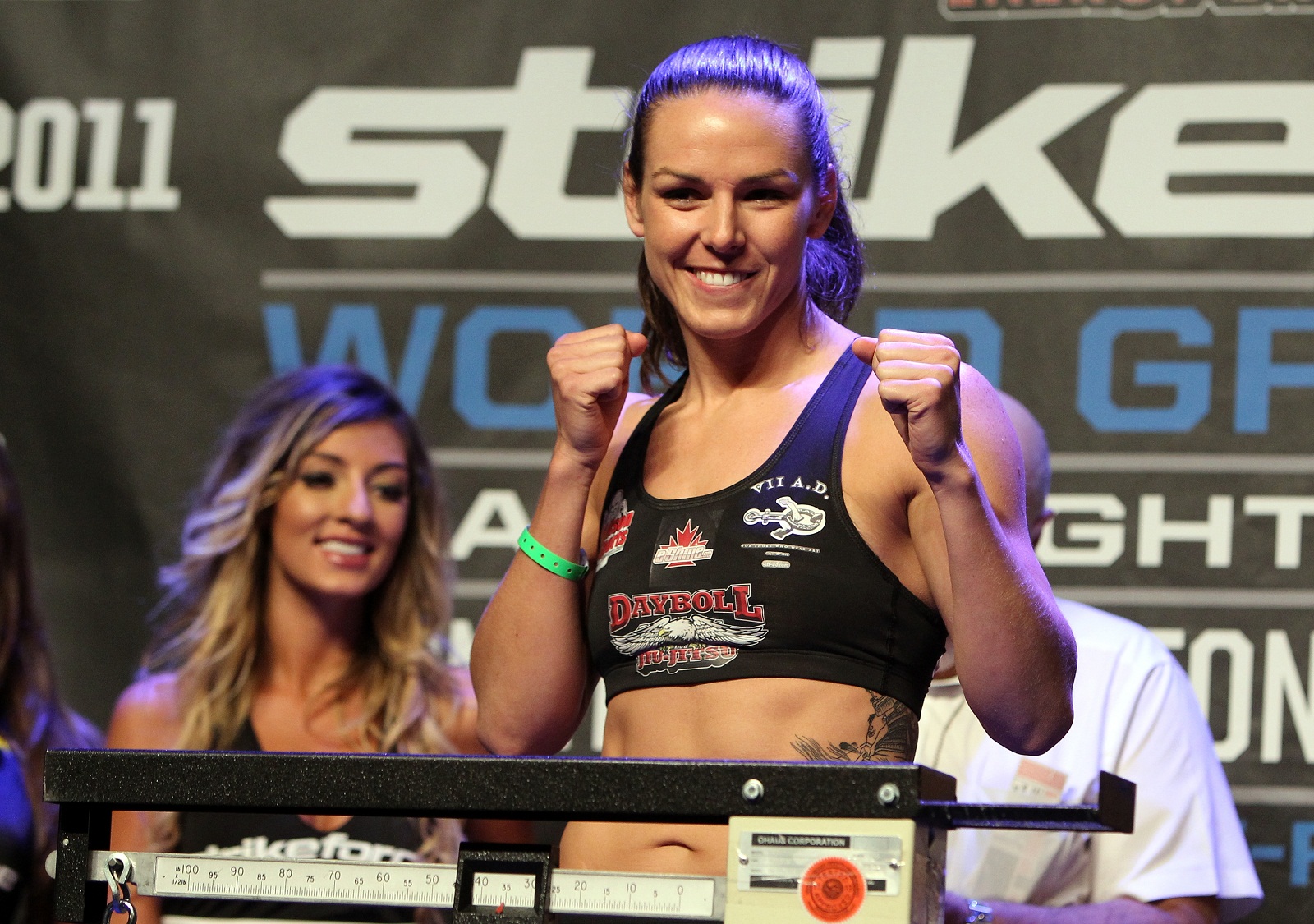 Since the beginning of 2012, fight fans have been nearly frothing at the mouth for arguably the most anticipated throwdown in women’s MMA history: “Rowdy” Ronda Rousey vs. Miesha “Takedown” Tate for the Strikeforce women’s bantamweight championship. It feels like this titanic twosome’s tussle for the title is about all the MMA media can talk about, but waiting in the wings on March 3rd’s undercard are a highly talented Canadian duo who are preparing to derail this hype-train with a show-stealing rematch to determine the next number one contender: Sarah Kaufman and Alexis Davis.

The title elimination bout will pit the first and former Strikeforce women’s bantamweight champion Kaufman against the highly-ranked in the 135-pound division Davis. If there’s truly a forgotten face on this Columbus, Ohio fight card, it would be Davis, as some believe Kaufman should be in the main event scrapping over the belt with Tate. But with a possible third win in Strikeforce in just as many fights, Davis could rewrite a loss on her record, claim a shot at bantamweight gold, teach a lesson to any overlooking her, and accomplish it all in well under a year’s time. Not too bad for the juggernaut from Port Colborne, Ontario, Canada.

“I always feel like I'm constantly underestimated,” asserts Davis. “I think with every fight in Strikeforce I've been the underdog. I think my good luck charm in there is being the underdog. But after this fight, I'm definitely going to come more into the spotlight. Everyone is focused on the Tate-Rousey fight, but I think Sarah and I will put on a show that will represent women's MMA well regardless of what happens in their fight. I'm sure I'll be coming up a lot more in the future.”

At 27 years old, Davis has proven she’s a strong-jawed grappler who certainly doesn’t shy away from contact, doesn’t wilt under pressure, and is getting used to getting her hand raised inside the Strikeforce cage. In 2011, Davis scored back-to-back victories in Strikeforce, starting with her debut unanimous decision grinder over veteran Julie Kedzie in July. Less than two months later, Davis squared off in an action packed slugfest with the then 6-1 (all wins by knockout), power punching “Lioness of the Ring,” Amanda Nunes.

“I knew she was going to try and finish it earlier,” says Davis. “She's notorious for first round knockouts. I knew she was going to come in guns blazing, looking for that one shot knockout. That was my whole gameplan going in there to close the distance because I didn't want to be on the end of those punches and to kind of keep the pressure on. Things didn't go as planned. She's also a brown belt in judo as well. She's tall. She's taller than me and with a longer reach. I wanted to make sure to keep the pressure on her and keep the cage control and work her legs more to kill that power. She's tough.”

The first five minutes were nearly all back and forth striking, with neither fighter giving the other an inch of breathing room. That may not have been what Davis’ coach and mentor Dave Dayboll wanted from his four stripe Brazilian jiu-jitsu brown belt, but it sent a message to her counterparts that Davis can more than hold her own with a feared knockout artist. The second round was more standup fisticuffs, but with a minute remaining it was Nunes who pulled the trigger and tried to bring the fight to the floor. After the well-executed throw from Nunes, Davis immediately reversed positions and took control for the eventual win.

“I have a great, positive coach in there and he was telling me that I have to push the pace more and try to practice slipping punches more in there,” tells Davis. “I'm kind of hard headed and I like to just drive forward in there. It's a constant progress there, trying to work my way in there with striking. I'm kind of stubborn. If you watch my fights you can kind of tell that. I figured if it went to the ground that that was something for my strong point in there. I was fortunate enough in the second round that she went for that judo throw and it's something in jiu-jitsu that we always try to work on: hips and capitalizing and reversing off of that.”

Once in top position and knowing there was only a short time remaining, Davis rained down punches any which way she could to get the fight stopped at 4:53 of round two. “I did hear the ‘knock knocks’ and I just thought I can't stop moving,” remembers Davis of her second TKO victory. “I tried to muster up all the energy I had and I was going to keep swinging until the ref pulled me off or the time was called. In the past, I've tried to pick my punches more, but watching a lot of UFC fights, some of the guys in there just can't stop swinging, so that was going through my head.”

Davis’ final thoughts on her September stoppage of Nunes are precisely why she will be a fan favorite and a tough test for Kaufman. “I like fighters that are aggressive; those are my favorite fighters to fight,” admits Davis, who knows from experience she won’t have to worry about Kaufman not coming forward swinging. “I like them to come out, like me, and you just want to strike and just want to smash each other. It makes it exciting for the fans and it makes it exciting for me as a fighter. I think that's what makes me better as a fighter is having someone who is pushing me constantly.”

At the Nationwide Arena, Davis will get a chance for some nearly five years in the making revenge against Kaufman, who served Davis her first loss in her first professional fight. The 26-year old KO queen from Victoria, British Colombia, Canada is an impressive 14-1, with her lone loss coming in her second Strikeforce title defense via third round armbar to Marloes Coenen. This bout will double as the biggest opportunity in Davis’ career, with a belt looming as well as competing in a perfect litmus test for her evolved abilities as a cagefighter against her first opponent, who just so happens to be one of the pound-for-pound best female fighters on the planet.

“She's a great fighter in there, obviously, anyone can tell that,” affirms Davis. “She's got incredible boxing standup and she's adding more and more kicks into her game. She's one of those fighters who is constantly pushing forward too. It is going to be who can manipulate their game more or change the angles, so they will be able to capitalize on that with their strengths. Being that she was a past title holder, it is going to see how far I am up those rankings. Personally for me, it will be good to see how much I have progressed as a fighter. Not even that we're just fighting for number 1 contendership, but I'm almost more excited to see how I have progressed technique wise.”

To prepare for the rematch, Davis has been splitting time between the Great White North and a couple very reputable establishments in the Sunshine State. Davis’ main gym is in her home Port Colborne with Master Dayboll, who is a highly decorated martial artist and a BJJ black belt under Royler Gracie. For her past few camps, Davis has been in Florida training her ground with world renowned BJJ black belt Pablo Popovitch, as well as her standup with the pro fighters at The Armory, including UFC lightweight star Edson Barboza. It’s an illustrious cast and crew of trainers that in every way are making Davis a top contender at bantamweight.

“It’s been great, especially when you have such strong opponents coming up with great standup,” says Davis. “A lot of these guys from Brazil have incredible kickboxing, Muay Thai and have incredible cage control. It's so funny how they can fine tune you out there. You don't realize, maybe I can shift my weight this way or step a little more to the outside - I love it. I even try to work my wrestling out there. I’m working a lot off my back. You want to be on top doing ground and pound, but we are constantly working on transitioning and working on my positioning. With these guys they can put you in those positions that you don't want to be in, but working on those bad positions is how you get better. It's always been a main focus for me, my Brazilian jiu-jitsu, and I think I will be stronger in that area. It's something I'm definitely going to try and exploit.”

This Saturday, a number one contender will emerge from a battle between two bantamweight bulls: Kaufman and Davis. “I see this fight ending by ground and pound,” estimates Davis, who wouldn't get overshadowed in 2012 again with a ferocious finish over a former foe. “Maybe that's because that's how I want to win because that's how she got me. She got me in mount position with ground and pound, so that's how I want to be in the top control position - and just smash.”