"I am always looking for a submission. And in my history in this sport, although it is new, it shows it." - Richardson Moreira 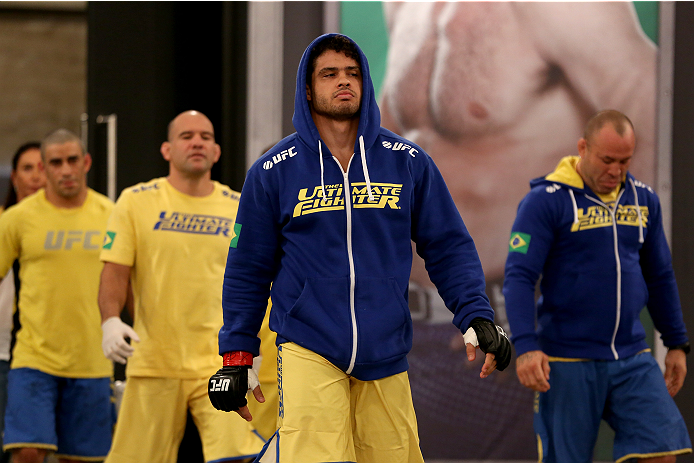 You could have walked away from watching The Ultimate Fighter Brazil 3 with an impression of Richardson Moreira having one of the cooler nicknames – “Rick Monstro” – seen around these parts in a while. But more likely you realized that the Team Wanderlei member likes leg locks in a way we haven’t seen since Rousimar Palhares was terrorizing the middleweight division.

“I've always looked to excel in my own game with positions that could match my body type and I think leg locks fit like a glove for me,” said Moreira through translator Michele Spinelli Davis.

That’s a good description, because usually once the 30-year-old grabs a hold of a leg, ankle, or foot, it’s like a hand in a glove, a painful glove that forces people to tap out.

For proof, four of Moreira’s seven wins have ended by either heel hook, Achilles lock, or ankle lock, and he’s also ended the other three victories by either knockout or submission, making him quite the finisher. It’s a trait he’s proud of.

“I am always looking for a submission,” he said. “And in my history in this sport, although it is new, it shows it.”

It’s why the Sao Paulo native is considered one of the top prospects to emerge from TUF Brazil 3 despite not being in the finals, but given his work with Team Nogueira and X-Gym, that’s really no surprise, and he cites his work with the Nogueira brothers, Rafael “Feijao” Cavalcante and the aforementioned Palhares as being key in his development before the show and in the lead-up to his UFC debut this Saturday against Marcos Rogerio de Lima.

“They are always beside me and guiding me,” said Moreira. “Looking back at all of our conversations, I would say that the one theme is to reach your goals with focus and determination.”

He followed that advice on TUF, knocking out Alexandre Machado and submitting Job Kleber before losing his semifinal match to Vitor Miranda. He has no regrets though.

“TUF is like a school that forges the athletes quickly,” he said. “Doing three fights in less than 40 days is very intense and makes the fighters work to their limit. This maturity I see as a positive point, while the difficulties I see are the training and living with the reality show and the cameras.”

It’s a common reaction from graduates of the show, especially when the memories (and wounds) are still fresh. But now it’s time for the really big show, and for Moreira, his next obstacle is “Pezao” de Lima. And even though the two became friends in the house, this weekend is all business.

“Marcos ‘Pezao’ is one of the most complete fighters in this division, but I don't see any kind of difficulty to fight against him,” said Moreira, who can hardly wait to step into the Octagon on Saturday.

“It's an amazing emotion. I had this dream and now it's happening.”

And how does that dream turn out?

“It will be an explosive fight with a lot of emotions. We will shake that floor.”