Hester's Aim: From TUF to Incredible

"I know it’s going to be a tough fight and he’s going to come out there
looking for takedowns, but I’m ready for whatever he brings to the
table." - Clint Hester 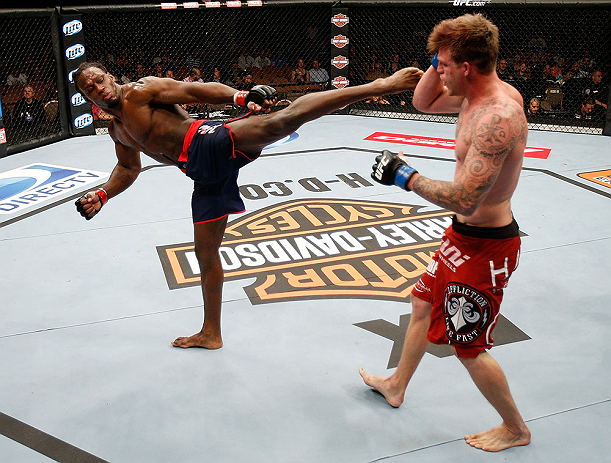 As the other elements of Clint Hester’s skill set continue to develop, there are a few crucial weapons he has in large supply.

The Atlanta native’s power game comes naturally and is visible in every element of his attack, as he’s used his strength in a variety of ways to ensure his hand gets raised at the end of the fight, which he’s done at a high frequency throughout his short time in the professional ranks.

The 27-year-old knows he can end a fight with the right strike at any moment and he’s proven capable to do so, as all but one of Hester’s nine victories have come by way of the finish.

Success at this level would boost any fighter’s confidence, but with Hester already operating at full charge in that department, the results of his work inside the Octagon have been nothing short of impressive.

The Ultimate Fighter season 17 alum has been victorious in both of his showings under the UFC banner, as he’s defeated Bristol Marunde and Dylan Andrews. “Headbussa” salted the former Strikeforce veteran with a soul-stealing standing elbow as he earned the knockout victory in the third round of their tilt at the finale show for his season of TUF.

The highlight reel finish ignited some buzz around the MMA world for the Georgia fighter and created some solid buzz heading into his next outing at UFC Fight Night: Condit vs. Kampmann 2 in Indianapolis. He would face a fellow product of the reality program as he squared off with former teammate Dylan Andrews at Banker’s Life Fieldhouse.

Where both fighters had been previously touted for their willingness to get down to business and stand toe-to-toe, their collision in the “Circle City” wasn’t the fight many expected to be. Both fighters appeared to be more hesitant than what they had typically shown, and when Andrews suffered a dislocated shoulder in the second frame and couldn’t continue, the fight was called on account of a doctor stoppage.

While he didn’t pick up the victory in the fashion he had hoped, a win is a win, and every “W” in the UFC holds value.

“I took a good number of positives out of that fight,” Hester said. “I got the victory and found a bunch of areas where I could improve and have been focusing on those for this camp. My coaches and I have been working on our body locks a lot and takedown defense, which are things I could have capitalized on in that fight.

“Things are starting good for me. I’ve got two wins in two fights in the UFC and what else could I really ask for? I’m going to get my third win and just keep progressing.”

He will have the opportunity to keep the momentum rolling when he steps in against Andy Enz this Saturday night at UFC 169 in Newark, N.J. The event will mark the first major pay-per-view event of the New Year and the middleweight clash between Hester and Enz on UFC Fight Pass will help to kick off what should ultimately be a night of action-packed fights from the Prudential Center.

While Hester is still relatively new to the organization, the undefeated Alaskan will be making his official UFC debut on Super Bowl weekend.  Hester is determined to put the first blemish on the 22-year-old’s record and he believes their fight will spill to every corner of the canvas.

“I think it’s going to be good fight and stylistically it’s a great matchup,” Hester said. “He has good hands and BJJ, but I think his wrestling is kind of suspect. I know it’s going to be a tough fight and he’s going to come out there looking for takedowns, but I’m ready for whatever he brings to the table. Whether it’s standing up, on the ground or wrestling against the cage; I’m prepared for everything.

“It’s going to be an exciting fight. We are both going to bring it and let our hands go. We both will take the fight wherever it needs to go because we are both well rounded fighters. It’s not going to just stay on the feet or be a grappling match. We are going to be all over the cage and may the best man win.”

There is no doubt Enz will present a difficult challenge for Hester to overcome on Saturday night, but a victory over the young newcomer will keep him in position to continue establishing his name in the 185-pound division. Where the middleweight fold for a long time a place where Anderson Silva and a “bunch of other fighters” competed, that certainly isn’t the case on the current landscape.

There is a new wave of talent rising at 185 pounds and shaking up the divisional rankings in the process. Hester wants to use the New Year to continue to develop his skills as a fighter, and then turn his sights toward the biggest names in the division in 2015.

“I’m really out to make a name for myself and build my brand this year,” Hester said. “I still have a lot of room to grow and don’t really want to jump into things too quickly. I want 2014 the year where I really grow and then 2015 to be the year I really start wrecking my way into the top 10.

“Every fighter has to develop, but luckily my strong points are what people want to see. That gives me an advantage and probably some longevity in the UFC because I come out to fight. Plus, I can take the fight anywhere I want to. If I want to beat the guy up on the ground I’ll put him there and ground and pound him. I’m tough to handle when I’m on top of you. I’m an incredible fighter no matter where I’m at.”