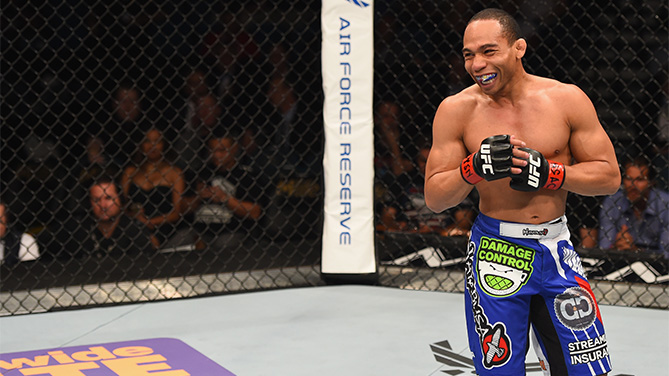 See him glide through the air from bar to bar on the American Ninja Warrior obstacle course, or hit a running back flip off the closest wall after a grueling training session and it becomes clear: The man has astonishing athleticism.

Ahead of the biggest fight of his life, Dodson, who takes on Demetrious Johnson in a flyweight title rematch in the main event of UFC 191 Saturday night, is living up to his nickname with an epic fight-week juggling act.

“The Magician's” wife gave birth to his first daughter, Delilah, on Sept. 1, a few days ahead of schedule. He was prepared to be in Albuquerque, New Mexico, for the birth, fight week or not.

“The way that Delilah is kicking right now she could be coming very soon,” Dodson said hours before the birth. “Hopefully they’ll let me jump on a jet and go see my baby [if she comes early] and then come back and knock out this chump.”

Have a baby and win a UFC championship belt? It’s all in a day’s work for Dodson, who is always smiling – unless he’s fighting – and even then he’s usually pretty happy.

Dodson believes that he is one of the best pound-for-pound MMA fighters on the planet, and the No. 1 contender has made a pretty good case for himself.

Dodson ‘s 8 percent knockdown rate is nearly twice the average of the heavyweight division. One of those knockdowns came against Johnson and the other against current bantamweight champion TJ Dillashaw, whom Dodson beat to win Season 14 of The Ultimate Fighter.

Dodson is convinced he won the first fight back in 2013. He dominated Johnson at times in the first two rounds of a five-round title fight, but the judges gave the decision to “Mighty Mouse”, who used his superhero cardio to outwork Dodson in the later rounds.

Reflecting on the bitter defeat, Dodson admits that he took a lazy approach to the fight. He did his own strength and conditioning training; he relied on what brought him to the UFC in the hope that his natural talent would see him through.

As the bright lights shined down on him at the packed United Center in Chicago on Jan. 26, 2013 in front of 7.7 million fans watching live on FOX, Dodson thought to himself, ‘Holy sh*t!”

“Not only was it just my third fight in the UFC, but it was my first main event. Then, the added pressure that it’s a title fight, and I was just caught up in the moment seeing it for the first time,” Dodson said.

“It’s like any comedian that sits there and tells you, ‘I’m used to doing stand-up comedy.’ But it’s different doing it in a little coffee house that holds maybe 200 people versus going to Madison Square Garden.”

Even though Dodson came up short in the first tilt, he has come closest to unseating the king at 125 pounds. He said that experience and a dedication to training every area of his game -- most important, an attention to detail when it comes to strength and conditioning -- will be the difference this time around.

“John has been five rounds now. He’s a little more experienced and he knows how to pace himself out well,” said Dodson’s head coach, Greg Jackson. “He’s going to come in in better shape and with a little bit better understanding of the total fight.“

In Dodson’s first fight back returning from a torn ACL sustained at UFC 187, the power-punching performer pulls no punches. “I fought like sh*t against Zach Makovsky,” he said. 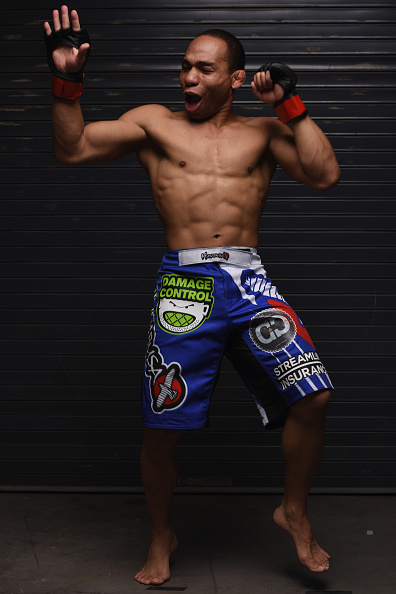 Dodson had to re-learn how to walk during rehabilitation, and sitting on the sideline is a recipe for disaster for a high-energy personality like “The Magician.” Add in the fact that his first fight back was against a good friend and former training partner, and Dodson just didn’t deliver.

Don’t worry, he said. At UFC 191, the real John Dodson will show up to the MGM Grand Garden Arena to atone for his last performance.

“I’m going in for the kill,” Dodson said. “I’m making sure I’m murdering him in the cage and bringing death to his title reign. I’m also going to kill any hope he has of fighting me ever again. It’s that murder-death-kill mentality and as soon as he hits the ground I’m pouncing on top of him like a ravaged dog who smells blood. I'm going to finish this fight.”

Dodson’s confidence and creative artistry inside the Octagon give him a chance against Johnson, and that is all he’s been waiting for – one more chance.

“I will guarantee that I am going to come out there and do something that’s never been done,” he said. “I’m going to stop Demetrious Johnson on Sept. 5.”