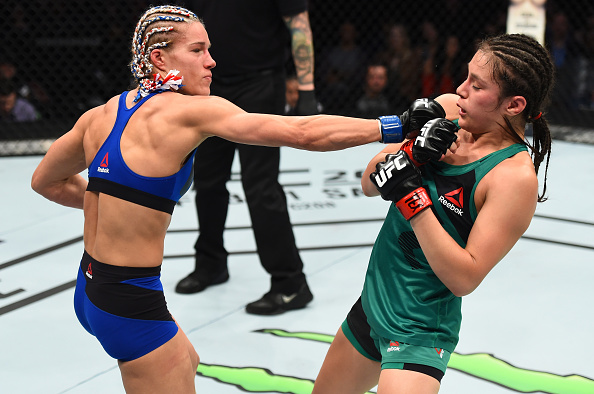 A Grasso head kick in the second minute of the opening round almost cost her as she slipped to the mat, but the Guadalajara native reacted quickly with a heel hook attempt that Herrig was able to shake off, putting the fight back on the feet. While there, Herrig fought confidently, picking her shots well as she fired off combinations.

Herrig’s veteran experience continued to pay dividends in round two, as she employed an effective stick and move strategy and even tossed in two takedowns in the closing minute.

There was no let-up from Herrig in the final frame, as she took Grasso down again and kept her lead in the standup game. And while Grasso battered Herrig with kicks to the leg, she wasn’t busy enough until the final minute, when she finally turned up the volume with her attack.

Fort Worth’s James Vick delivered a finish for his Texas fans in lightweight action, submitting Abel Trujillo in the third and final round.

After having some difficulty closing the distance on the taller Vick, Trujillo got the fight to the mat in the third minute of the first frame. The action stalled on the ground, and soon the two fighters rose and traded kicks. Vick had some success late with his striking and grappling, and it may have been enough to steal the round.

Trujillo (15-7, 1 NC) began to get closer with his strikes in round two, but it was Vick who got the takedown with a little over two minutes to go. While there, Vick locked in a D’Arce choke, but Trujillo calmly waited out the precarious situation and got loose, making it to his feet in the final minute.

Vick (10-1) opened round three with a flush knee to the head and Trujillo staggered backward. Vick followed and Trujillo tried to swing haymakers to keep his opponent at bay, but the Texan put the fight back on the mat and it was time for the choke once more. This time, the D’Arce did the trick, with Trujillo tapping out at :49 of the third frame. 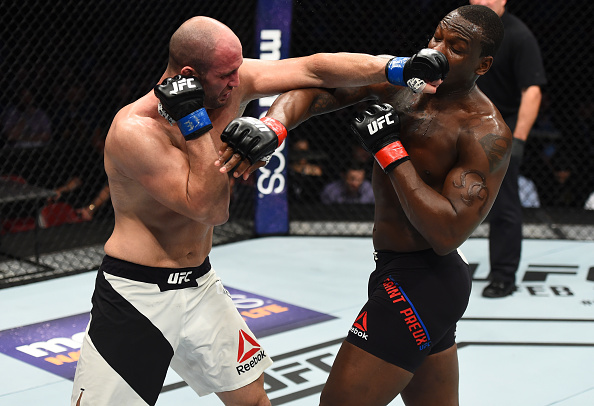 The first Switzerland native to be signed to the UFC, Volkan Oezdemir put his nation on the MMA map in a big way, upsetting No. 6-ranked light heavyweight contender Ovince Saint Preux via split decision.

Oezdemir, who took the bout on short notice to replace Jan Blachowicz, wasn’t shy about attacking Saint Preux, with the kicks and punches he was throwing showing him to be a seasoned vet and not an Octagon newcomer. OSP did land a hard left hand that backed Oezdemir up briefly, but the Swiss fighter continued to march forward, and he capped off the round with a solid flurry against the fence.

The fight settled into a slower groove in the second, with both fighters having their moments in a tough frame to score. Fatigue set in for both men in round three, but the veteran Saint Preux had more in the tank, nearly stopping his exhausted foe in the final seconds. Oezdemir made it to the final horn though, and his work in the first two rounds was enough for him to take the win by scores of 29-28 twice and 28-29.

Octagon rookie Marcel Fortuna made a statement in his UFC debut, knocking out heavyweight veteran Anthony Hamilton in the first round.

Fortuna had to deal with adversity early, as he emerged from an exchange with a cut over his right eye from a clash of heads. Referee Herb Dean had the Octagonside physician check the cut out in the second minute, but the Brazilian was cleared to continue. Around the midway point of the frame, a right hand from Fortuna briefly buckled Hamilton’s knees, and a few moments later, a second right landed flush and put Hamilton on the deck hard. There was no need for a follow-up from Fortuna, as Dean stepped in and stopped the fight at 3:10 of the first frame.

Fortuna moves to 9-1 with the win; Albuquerque’s Hamilton falls to 15-7.

The return of Invicta FC strawweight champion Angela Hill was a welcome one, but in the main card opener, it was Jessica Andrade’s night, as the top five strawweight contender may have cemented a shot at UFC champion Joanna Jedrzejczyk with an exciting three-round decision win.

All three judges saw the fight 30-27 in one of the closest and most competitive shutouts any fight fans could see.

Andrade and Hill fought the first five minutes at a furious pace, Hill able to get off solid kicks from the outside while trying to hold off the steady pressure of Andrade. And while Hill held her own during exchanges with Andrade, as the round progressed, it appeared that the stronger Brazilian was taking over and landing the more telling blows.

Hill was able to open a cut under the right eye of Andrade early in round two, and she not only kept the pace high, but was also showing off a granite chin under the relentless attack of “Bate Estaca,” who threw everything at her foe whenever she got within striking range. In the final minute, the bout went to the mat and Andrade took Hill’s back, firing off strikes each step of the way. Hill rose to her feet, but Andrade slammed “Overkill” to the mat once more just before the end of the round.

The crowd erupted early in round three as Hill and Andrade slugged it out against the fence, neither fighter giving an inch in the process. Yet as the round progressed, Andrade’s right hand began to find its mark more and more often, and the end seemed to be close. At least until a Hill left dropped Andrade with 2:40 remaining. Andrade got to her feet quickly and went back on the attack, pouring on the offense until the final horn, when both fighters got a rousing ovation from the fans at Toyota Center.