Herrera: From the Streets to The Show 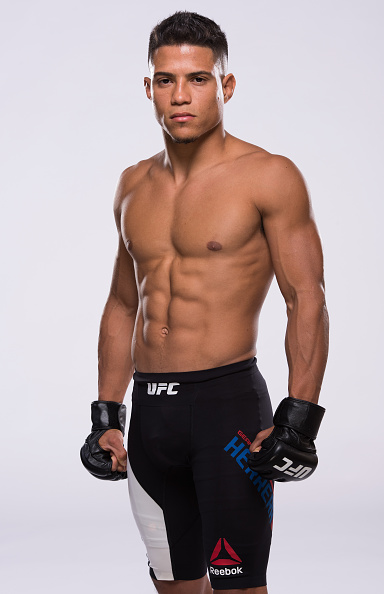 Becoming a member of the UFC roster is a life-altering moment for any fighter, with that first walk to the Octagon proof positive that you’re no longer struggling on the regional circuit, but battling it out in the biggest promotion in the sport.

“My life has changed already, just with the announcement (that he signed) and I haven’t even had a fight for the UFC,” he laughs. “At first it was overwhelming, and then you start to see some of the fake people trying to creep up and get in the spotlight with me. I can only imagine what it will be like if I’m a contender for the title, but I’m ready to go in there and fight the best. I’m not saying I’m going to win every single one of my fights, but what I will tell you is that I will do the absolute best, and that I would rather die before giving up on a fight.”

Simply put, the young Herrera liked to hang out with buddies who weren’t exactly doing the right things in the streets of Florida, and he may have liked to scrap even more.

“I was going down a rough road,” he said. “I wasn’t hanging out with the right crowd, and a lot of people I knew back then are dead or in jail, but I started waking up and said I need to do something with my life.”

At 19, he considered a life in the military, but then opened his eyes to mixed martial arts, though at the time his friends were just telling him he “should do UFC.”

“I didn’t know mixed martial arts was the name of the sport,” Herrera laughs. Yet cleaning up his act and going in the direction of prizefighting didn’t sit too well with his family. He stuck to his guns, yet his struggles continued.

“I ended up getting kicked out of the house, so I went to live in the gym,” he said. “It was rough. My teammates would bring me leftovers from their house because I didn’t have money or a job, but eventually I got a job in the tattoo shop next door and the owner of the shop took me into his home and allowed me to live there.”

By then, he was showing promise on the amateur scene, and in 2011 he turned pro. After that first victory over Andrew Connors, his family even came around. Now it was time to start focusing not on surviving the streets and finding a place to stay, but on making his way to the UFC. Life-changing? Absolutely.

“I was growing up in the streets, and the sport changed my life,” he said. “I think I’ve become smarter over the years, and honestly, I thank God for the struggle because it hasn’t been easy. I was homeless, living in the gym, and I’ve gone hungry. I went in the streets looking for money, and I feel like that’s all given me the strength to not fear any sort of situation in life. And if I don’t fear a situation in life, fighting is the easy part.”

He’s certainly made it look that way so far, and when he signed with the RFA promotion, it appeared that a UFC call was just around the corner. He still didn’t expect it to come shortly after his first win in the promotion over Josh Rave in April.

“All my focus was on RFA and then out of nowhere, the UFC hit me up,” he said. Herrera even got a phone call from his new boss, which made everything a lot more real to him than it was before UFC President Dana White dialed his number.

“Dana White actually gave me a call the day after Sean Shelby called me, and at first it was just this awkward silence like ‘holy crap, it’s Dana White,’” Herrera laughed. “But then I thanked him and told him I’m excited to go in there and make a difference in the division, and he just told me he can’t wait to watch me perform. Right then and there, when I hung up, that’s when the emotions started. I know how many times I’ve come close to giving up, but I’m here.”

Herrera isn’t content with just making the roster though. He wants to make an impact in a 125-pound weight class that he believes needs some impact players.

“I’m not trying to sound arrogant, but I feel like I’ve belonged in the UFC for a while now and I’m just saying this based on what I’ve seen in the division so far,” he said. “I see a lot of things that are lacking as far as technique and as far as personality, and I feel like the UFC could really use a guy like me. So I’m ready to fight the best, and that’s how you become the best, by taking on tough guys.”

He’s getting one in Albuquerque’s Borg, a fellow prospect who already has three UFC bouts under his belt, but Herrera has been in tougher fights in life, and that’s what he’s using as fuel for Saturday night’s matchup.

“I feel like I’m the complete package,” he said. “I’m a hard-working individual, I have people keep telling me I’m talented, I love to fight, I’m a scrappy guy and I’ve never had a boring fight in my life, and I’m ready to go in there and make a change and bring a lot of positive light into the division.”