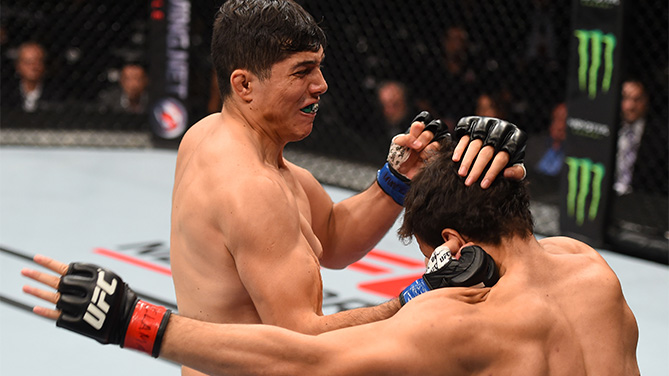 Guadalajara welterweight Alvaro Herrera didn’t stick around long in his UFC debut against fellow Ultimate Fighter Latin America castmate Vernon Ramos Saturday at Arena Monterrey in Monterrey, Mexico, as he ended the bout via knockout in less than a minute.

As the two engaged for the first serious exchange to start the bout, Herrera ripped off a combination of power shots, with a right hand dropping and stopping Ramos, referee Dan Miragliotta stepping in at the 30-second mark. 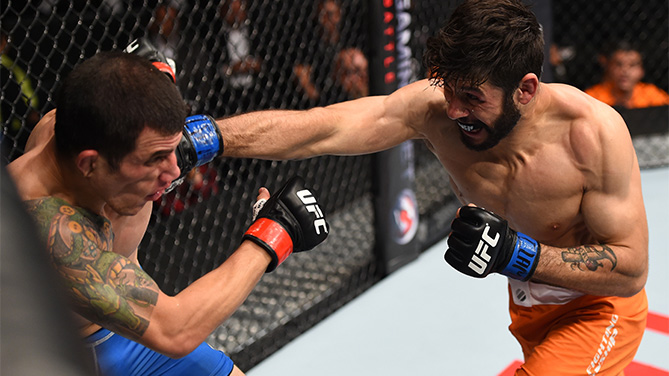 The first two TUF Latin America 2 participants of the night put on a show for nearly four minutes, with Marco Polo Reyes knocking out Cesar Arzamendia in the opening round of their lightweight bout.

As the fight began, Reyes scored a flash knockdown, and while it was a precursor of things to come, it initially looked like Arzamendia had momentum on his side as he bounced up from the canvas and mixed his strikes in with several takedowns. But after rising from one of the takedowns and breaking from a subsequent clinch, Reyes ripped off a flush left hook that dropped Arzamendia a second time. This time, he didn’t get up, as two follow-up blows brought in referee Mario Yamasaki to halt the bout at 3:42 of the round. 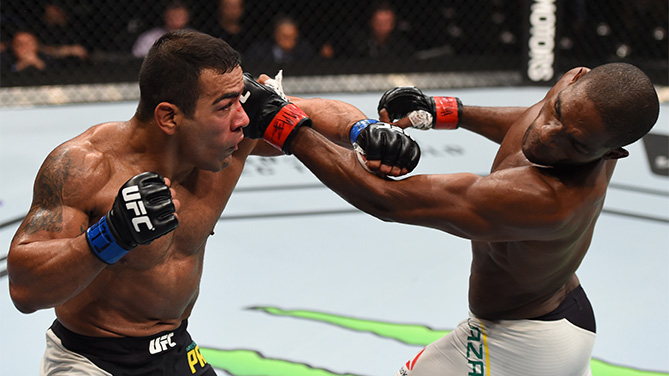 The first round was a back and forth affair, Lazaro working well behind his left jab and a series of hard left kicks. Prazeres was swinging for the cheap seats with every punch, and he landed more than his share, using one of them to score the lone takedown of the frame.

The bout strayed to the mat early in the second frame, Prazeres initiating the takedown but Lazaro ending up in the top position. After scoring some points from there, Lazaro was forced to give up the top spot when referee Gary Copeland restarted the fight with two minutes left. Another restart took place a minute later as the two locked up against the fence, with little significant action taking place before the horn.

Round three belonged to Lazaro, whose jab, solid takedown defense and top control when the bout did hit the mat seemingly allowed him to break the fight wide open and solidify his second consecutive UFC win, but the judges disagreed, awarding the bout to Prazeres.