Hernandez's decision to fight full-time panning out well so far 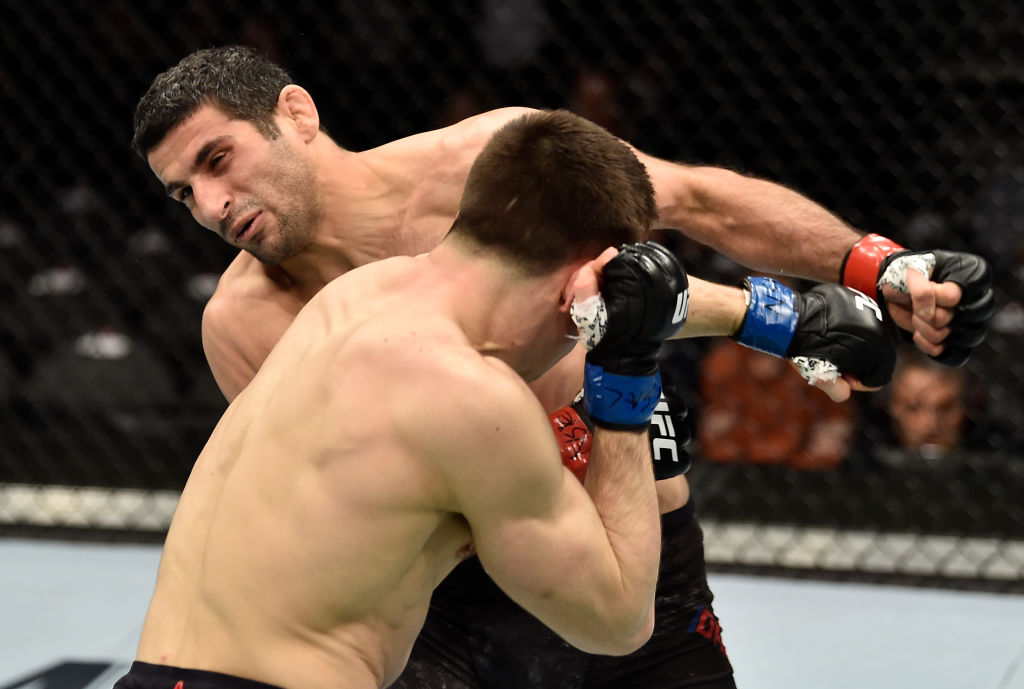 Alexander Hernandez knocks out Beneil Dariush of Iran in their lightweight bout during the UFC 222 event inside T-Mobile Arena on March 3, 2018 in Las Vegas, Nevada. (Photo by Jeff Bottari/Zuffa LLC/Zuffa LLC via Getty Images)" align="center" />
Alexander Hernandez may be the talk of the MMA world after his stunning first-round knockout of Beneil Dariush last weekend in Las Vegas, but there was a time when the confident Texan did question if his decision to quit his job as a mortgage loan officer earlier this year was the right call.

“That was the most liberating moment in my life, followed by an overwhelming angst and anxiety,” he laughs. “‘Oh s**t, this is very real now.’ I had a few sleepless nights.”

Luckily, he didn’t need to worry, as that one win at UFC 222 shot him right into the 155-pound rankings, and now the No. 13-ranked Hernandez has nothing but big fights and good things ahead of him.

He didn’t fall out of the sky like the swaggering gunslinger with heavy hands he looked like last Saturday, though. Like any up and comer, he had to face the struggles of the fight game head on, and when you do that, there are doubts sometimes.

“Last year, I turned 25 in October and I had this quarter-life crisis,” he said. “I was successful in my job and I was doing well, but there was a piece missing. I’m looking at these guys in the UFC and I feel like I’m training my butt off, but I’m getting that itch like, ‘Man, you gotta be in there already.’ I had to keep it in my mind to be patient. ‘As long as you’re getting better every single day, as soon as that call does come, you’re gonna show out and do exactly what you need to do.’”

A month after his birthday, he stopped Derrick Adkins in three rounds. The win was his first since July 2016, when he thrilled his hometown fans in San Antonio with a first-round finish of Chris Pecero. That was his first fight in 10 months, and you can see where Hernandez was at over those few years.

“I was back and forth and kind of split in my head for years on what the right route was, and I was thinking about things for the wrong reasons,” he said. “It was monetary based and I had a passion for fighting but was getting burned out because I had been grappling and training since I was a kid. So there were a lot of different things and I was going back and forth, and then finally I caught this stride after that fight (against Pecero), something just started clicking. I had this hunger and it was like I proved something to myself that I can perform on the big stage and show out. I knew I always had the talent; I just had anxiety issues with performing the way I did in practice.

“I knew that a lot of times that what separates the most elite from the run of the mill guys that are trying to make it is that if you were at a gym sparring each other, you guys might look a lot closer than you think. But those elite guys are able to do that on the big stage, where a lot of people aren’t. So once I proved to myself I could do that, everything changed and I started to evolve so rapidly.”

With an 8-1 record, Hernandez proved he had the talent. Now he was waiting for an opportunity. Less than two weeks out from UFC 222, his manager, Jason House, gave him a call.

“F**k yes, that’s absolutely what I want,” answered Hernandez, who got off the phone without asking House who he was facing in the biggest fight of his life.

Hernandez laughs, and even when told he was going to be fighting a lightweight contender in Dariush, he wasn’t overwhelmed by the moment. In fact, he embraced it, and while he was a sizeable underdog in replacing the injured Bobby Green in the fight, his tunnel vision was clear.

“I first thought, ‘How crazy is this?’ But it can be done. This is my fight and I am gonna do this. I am gonna win this fight. By the end of the week, I couldn’t stop saying this fight is not gonna make it to the second round. I’m gonna finish him in the first. It was like a locomotive steam engine that week and we kept picking up momentum.”

Along the way, he shut out any possibility of doubt creeping in, but a couple nights before he made the walk, he couldn’t help himself.

“I tried to stay offline completely, especially the week of the fight,” Hernandez said. “But I had this little itch and I decided to type in ‘Alex Hernandez UFC’ two nights before the fight and I read something where I was called a ‘one-dimensional wrestler.’ I just thought, yeah, believe that. Awesome.”

Then he ended the fight with a single punch.

The Performance of the Night win, which took just 42 seconds, put Hernandez on the map in a big way, which means there will be critics, some of whom criticized what looked to be a fake glove tap at the start of the bout that turned into a kick to the body. That’s really not what happened, he said.

“If you watched any of my fights, I always have a long reach,” he said. “And the second I teap (kick) him, my hands go right back to where they were at before I threw it. I wasn’t trying to Houdini Dariush’s palm. It was always the plan of rush him, find the range and put a hole through his chest.”

“If you see a man storming across the cage at you, charging at full speed and your first thought is, ‘He’s probably coming in hot for the high five,’ you need to reassess what you’re doing in that cage,” Hernandez continues. “I never had any intentions of faking him out. I wasn’t going for that. I was charging him, I caught my range and threw the kick. As you know, he likes to take charge of the center of the cage, he likes to stalk his opponent to their wall and he likes to bully them and everybody respects the hell out of him way more than they need to. So the game plan was that I was gonna storm across the cage and catch him on his end before he gets any kind of cadence set, teap (kick) through his belly, disrupt his breathing, disrupt his pace, and the rest of the game is gonna be mine. It went exactly how we planned.”

Hernandez has a remarkable cool to him in and out of the Octagon. It’s a confidence – coupled with talent - that is going to make him a dangerous young man in the lightweight division in the coming years. As for now, he’s hoping for a summer return to action, though he’s already back in the gym, and he’s obviously a firm believer in the ‘stay ready so you don’t have to get ready’ philosophy. So what happens if he gets another late-notice call for an upcoming card before the summer comes?

“You shut your mouth,” he laughs. Then he pauses and continues.

“Weight’s right, I don’t know. How dirty would that be?”