I feel like there's so many lessons to be learned in a loss before you get to a major organization like the UFC. And I feel that if you haven't taken a loss yet coming into the UFC, there's a lot of lessons you might not have learned along the way.”
By Thomas Gerbasi, on Twitter: @TGerbasi • Sep. 23, 2019

Nohelin Hernandez may not have the perfect pro MMA record that Jack Shore is bringing into their Saturday bout in Copenhagen, but the Gilroy, California native believes he’s got something more valuable in his back pocket as he gets ready for his second trip to the Octagon.

“This guy (Shore) is 11-0, undefeated, and that plays against him,” said Hernandez. “I feel like there's so many lessons to be learned in a loss before you get to a major organization like the UFC. And I feel that if you haven't taken a loss yet coming into the UFC, there's a lot of lessons you might not have learned along the way.”

Hernandez, 10-3, believes the three losses he’s suffered since turning pro in 2016 have prepared him for what’s ahead, though it wasn’t easy to leave a fight without his hand raised.

“My first professional loss in MMA, I was completely heartbroken for a week,” he said of his 2017 defeat against Fierce Taylor Jr. “I just went home and went back to the drawing board and I learned lessons from each loss. It sounds very cliché, but I really do believe that these losses teach you lessons and it's a point for personal growth both inside the ring and as a person. So I've got experience and the knowledge of things that I've done wrong in the past.” 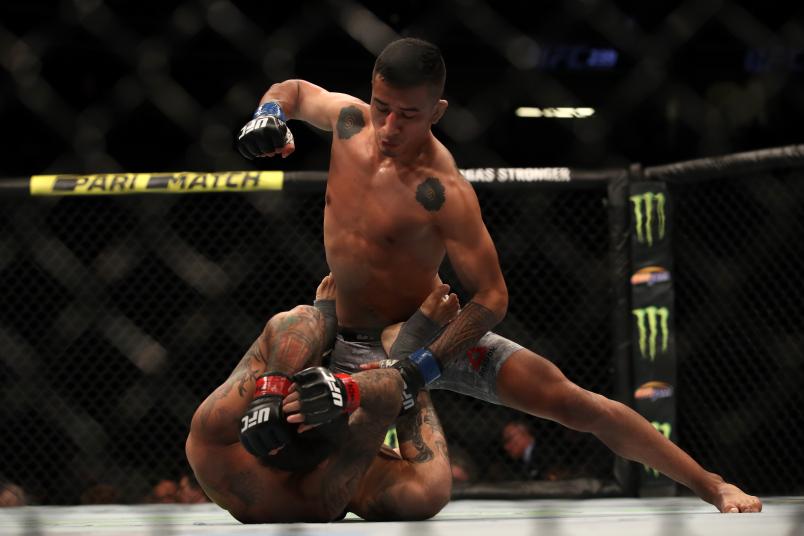 There would be a second defeat – this one to Vincent Cachero in January of 2018 – before he ran off four straight wins and earned a late-notice call to face Marlon Vera at UFC 239 in July. It was perhaps the most pressure-filled situation a young fighter could be in, but the 25-year-old admits that the famed UFC jitters were nowhere to be found.

“For me, the brighter the lights, the better; the more people in the stadium, the better,” he said of his International Fight Week bout in Las Vegas. “I just really fed off the moment. It was a little surprising because I always pictured that in my UFC debut I'd be nervous, but there were no jitters. The feelings that came were more of being happy and energetic at the fact that I'm finally here after all these years, after all these fights that I've had, after all these battles and things that happened in life. I was happy and in the moment.”

Hernandez would give a good account of himself before getting caught and submitted by Vera in the second round, and while the result was disappointing, it was another opportunity to gain some knowledge and experience before the next one, and “Suave” has kept the lessons coming with trips to Mexico and Tiger Muay Thai in Thailand to prepare for this weekend’s bout. Add in his work with his team at American Kickboxing Academy, and Hernandez has never felt more ready for his second chance to make a first impression.

“One of the beauties of being out here is that you have zero distractions,” said Hernandez from Thailand before making the trip to Denmark. “You have training twice a day, six times a week, and you're really off by yourself. Of course you make friends, but a lot of it is being here by yourself, you get to focus, and you really get some good training over here with all the partners that fly in from all over the world. Everybody's really high-level, everybody's really cool here and so far I think that I made the right decision.”

Well, 7am interviews could be distracting, but Hernandez was just fine with it. As for the final verdict on UFC 239, he has no regrets about battling a fighter on the verge of the top 15 on less than a week’s notice.

Free Fight: Hermansson vs Jacare | Cannonier's Must See Moment | Inside the Octagon

“I really don't care who the opponent would have been; I'm always ready to fight and I always feel like I have such good training partners and such good coaches that it really doesn't matter who you put me up against, I think I'm gonna give everybody a run for their money,” he said. “Unfortunately, I wasn't able to get the win at UFC 239 but I think I was able to showcase my experience and what I bring to the table. I'm looking to showcase more of it and hopefully get the win this time around at UFC Copenhagen.”

Sounds like this Hernandez kid doesn’t get rattled by much, does he? He owes that to a fight career built with no shortcuts.

“I come from California where it's just a death row of killers that I've fought,” he said. “I have not had an easy fight since starting my career.”

He doesn’t expect one this Saturday either. But if pressed, he believes he’s got enough lessons from losing to last him a while. This time, he won’t be satisfied with anything but his first UFC victory.

“I think it's a great matchup and maybe they're bringing me in to lose, but we're gonna give him hell and we're gonna come out with the win.”