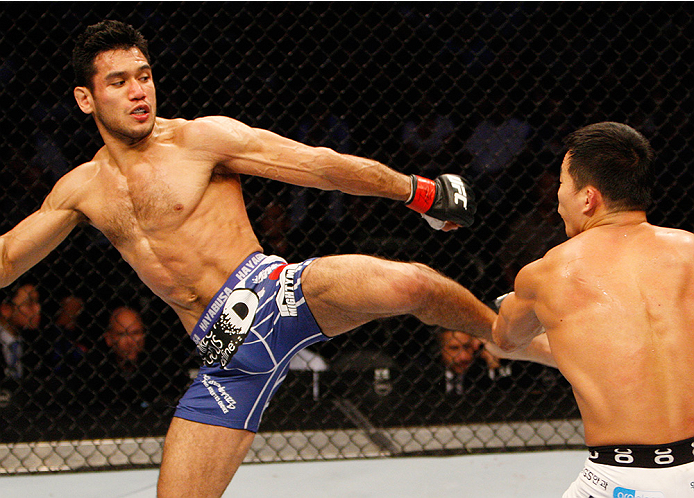 When Brooklyn, New York’s Phillipe Nover enters the Octagon to face young and hungry Russian Zubaira Tukhugov on December 10 at The Chelsea at The Cosmopolitan Las Vegas – he will be looking to not only make it five wins in a row, but to also announce that the man who was once dubbed “The next Anderson Silva” is back on track in what has been a topsy-turvy career.

“If anyone can analyze my career, I’ve had consecutive losses, I’ve been in the limelight where Dana White was saying phenomenal things about me, I was on the bottom where no one would even socialize with me, and now I’m back in the big show. It’s just been a bumpy ride with a lot of ups and downs,” says the always-cerebral Nover – an emergency room nurse at a Brooklyn hospital by trade.

After being cut from the UFC in 2010 following three consecutive losses which came after he made a splash on The Ultimate Fighter’s eighth season, Nover was in the hospital – this time as a patient – and contemplating retirement.

“I was in the operating room getting neck surgery and thinking it’s time to hang them up, but I didn’t,” he said. “I stuck with it. I’ve won on the biggest stages and I’ve lost on the biggest stages.  I don’t have the career like Jon Jones and Chris Weidman, my career has been up and down, but now I’m on an upswing and I’m just going to keep moving forward, training smarter and thus, fighting smarter.”

In Tukhugov, Nover faces a fighter who has been on a tear since turning pro in 2010. The 24-year old went 15-3 against mostly unknown talent in Russia before going 2-0 in the UFC. However, “Warrior” has been sidelined for fourteen months, while Nover has already fought twice this year.

In his second fight of 2015, the UFC welcomed the Filipino-American back to the world’s most prominent promotion in Manila for the Frankie Edgar vs. Urijah Faber card back in May, where he was victorious over Yui Chul Nam, and with Edgar fighting Faber protégé Mendes the day after – Nover is beginning to see a pattern.

“I like fighting on the same card or near when Frankie is fighting because I get to go down to Jersey and train with him,” he said. “He’s part of Team Renzo Gracie as am I, and that makes me lucky to be able to go to any number of gyms in the New York City area. My primary spot is Renzo Gracie NYC, but I also go to Church Street Boxing and Edge Wrestling in Hoboken, and I’ve been spending time with Matt Serra, and have had the opportunity to train with Alijamain Sterling, the fifth-ranked bantamweight. I’ve been sparring with him and drilling with him, and Al Iaquinta is around and he’s a super tough guy. People don’t really know this, but Matt Serra and I go way back. We even fought on the same UFC cards a long time ago, so we are longtime friends.”

That card was UFC 98 in Las Vegas, where Serra dropped a unanimous decision against Matt Hughes and Nover lost his second in a row on his way to being cut. But he said he’s come a long way since then.

“As you get older, your body gets more sensitive to its environment and what you put into it,” he said. “I’m in my 30s, so I need extra rest, I need a little more time to recover. As long as I train I also need to put time in to rehab, from massage therapists, to acupuncturists to accu-pressurists, there are so many things you need to worry about while being a professional athlete. It’s less beating the crap out of myself and more about technique now.”

Indeed, Nover is seven years the elder of Tukhugov, but he believes he has done the proper preparation to earn the W as the second fight of a three-event UFC Fight Week – an honor that has not been lost on him.

“When I got the call that I was going to be part of the UFC Fight Week I was stoked,” he says. “I thought I would like to get a fight when Frankie fights, and it turned out I got the call to fight the day before Frankie and it turned out to be perfect. And it looks like I’m the second fight of the entire fight week and I’m just happy and I’m going to kick this off the right way. This is a great fight for me. Zubaira is on his way up and he’s looking at me like a stepping stone, so I’m definitely taking his game seriously.

But he’s going to find out the hard way that I’m not some guy you think you can just go through to get to the next level. This is my time, not his.”