Henry Cejudo: This Time It's Personal 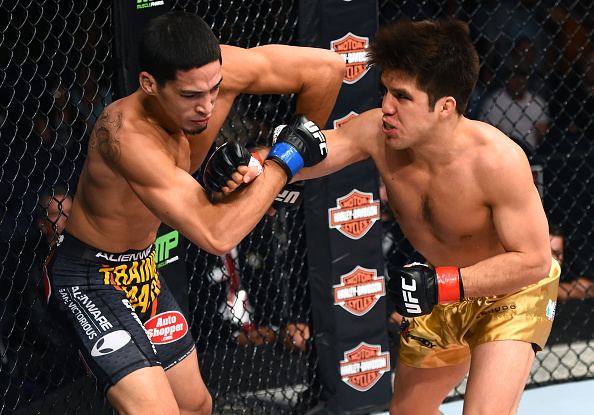 Henry Cejudo drags out every description of the food he’s missing on his road to the 125-pound weight class, maybe just to convince himself that there is a purpose to that always torturous weight-cutting process.

“I’m making myself suffer right now,” he said. “I’m not able to eat my chimichangas, my enchiladas, my deep-fried burritos. I’m going back to crackers and baloney.”

He laughs, not letting weight-cutting take away his sense of humor. He’s attempted to make the flyweight limit before, but came up short. This time, with a UFC 185 main card bout against former world title challenger Chris Cariaso awaiting him on Saturday, he knows it’s his last shot to hit 126 pounds on Friday. You might wonder why he would even bother after a spectacular UFC debut against Dustin Kimura last December, but this is a mountain the former Olympic Gold medalist insists that he will climb.

“I think it’s more of a personal thing for me,” Cejudo said. “I understood that I had to go back to my living at the Olympic Training Center days by eating very, very healthy, and starting early in the morning. Once you go back to the civilian lifestyle after training for four years at the Olympic Training Center, you get accustomed to society and this was something I kind of fell away from. But going back down is a personal thing for me, just knowing that I can make it. Eventually I am going to go up, but I can’t let myself not make weight and that’s it.”

It’s an admirable attitude, the idea that there is unfinished business with the scale and the flyweight division, and if anyone can pull off victories in both realms it’s the 28-year-old Cejudo, whose past athletic history served him well in his Octagon debut against Kimura.

“I’ll always be nervous, but once it’s go time, I always learned to embrace pressure,” he said. “Pressure’s been my best friend and I actually do better under pressure. I become more aware. The bigger the crowd, the better I perform. I feel like I was born to do this, that I was born to be a champion.”

And even though attitude and determination are key factors in his future success, what the unbeaten Phoenix product really opened eyes with last December was his crisp stand-up attack. But as he insists, he will never abandon what got him here in the first place.

“I will never forget my wrestling because everything goes around my wrestling,” he said. “I wrestle three times a week, and I do stand-up six days a week. They both go hand-in-hand.”

As for conditioning and diet, that’s a daily part of his routine, and if he wants any further inspiration, he can look no further than his friend and training partner, UFC bantamweight prospect Frankie Saenz, who is coming off a big win over Iuri Alcantara last month.

“Hopefully both of us will become UFC champions one day,” Cejudo said. “He’s disciplined, I was able to see him cut weight and go the whole nutrition route, and I saw the way he did it. I was with him in Brazil, and it inspired me. It’s not about going hard and working out longer. I’m older now and I really have to watch what I eat.”

If he does that, he expects that everything else will find its proper place. And he’s ready for all of it.

“At this point, I’m not my boss,” he said, “so whoever they ask me to fight, I feel prepared enough to beat anybody in the world. I’m rolling up my sleeves. I’m getting back to my ghetto mentality and the way I grew up – bring ‘em out, bring ‘em out.”