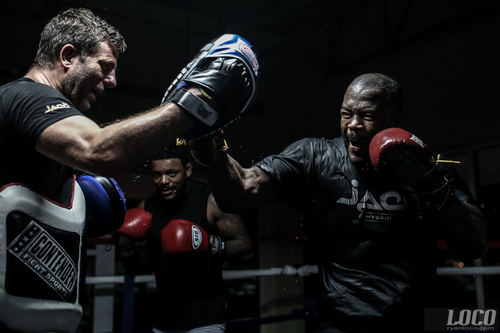 By all accounts, including his own, Henri Hooft is one of the nicest folks in the fight business. But when it’s time to fight, don’t expect to see a smile on his face.

“I’m a nice guy,” he laughs. “But for me when the fights are on, I take it very seriously. I was a fighter myself too, so we have fun in the dressing room but as soon as it comes to the fight, it’s all business.”

And business is good these days for the head stand-up coach for Florida’s Blackzilians fight team, home to the likes of Rashad Evans, Vitor Belfort, Anthony Johnson, Eddie Alvarez, Michael Johnson, and Abel Trujillo. Those are just a handful of the top-notch competitors Hooft coaches that are on the UFC roster, and if you’ve been noticing the stand-up handiwork of the aforementioned sextet, it’s no surprise that the Netherlands native has been the one holding the reins, as he’s taken a team that was once erratic at best, and helped turn them into a juggernaut with effective, yet simple, strategies on striking and fighting in general.

“When I came here, I thought ‘man, these guys got a lot of privileges,’” Hooft, who came to Boca Raton three years ago and never left, said. “They have everything. They’ve got a nice gym, a good manager, they have whatever they want, and then they fight and they didn’t really show up in some fights. They got choked out or they just gave up, so I put in a little different mentality in training, along with the other coaches.”

That mentality was instilled in Hooft from the first time he put the gloves on as a teenager. In the Netherlands, kickboxing is the law. It’s almost like baseball, football, or basketball here in the States; it’s in your life from the cradle to grave, and you never lose your love for it. And when you have the phrase “Dutch kickboxer” in front of your name, it’s a signal that you are to be respected for your knowledge of the sport and feared for your prowess in it.

“If you talk about basketball, everybody talks about the NBA,” he said. “If you’re an American and you talk about kickboxing, it’s our sport. It’s one of the biggest sports in Holland. The biggest is soccer, but it looks like kickboxing, only with a ball. (Laughs) We learn it from when we’re young. We go from karate or judo to kickboxing. It’s also a bit in the genes.”

Mentored by the legendary Rob Kaman, Hooft began fighting professionally while coaching at the same time, something he says “just came natural.” And he was good at both, earning both World and European titles in the ring during a career that spanned over 100 fights. That’s just the way things are done in that world. You don’t fight a handful of times a year at best in kickboxing; you’re always getting ready for the next bout.

It was through current kickboxing superstar Tyrone Spong that Hooft found his way to the Blackzilians gym when “The King of the Ring” showed up to work with Evans before his rematch with Tito Ortiz. Spong also had a fight to get ready for, so he asked Hooft to come along with him. Before he even got on the plane, Hooft was being told what a great situation he was walking into and how good things were going to be. And we won’t say he was skeptical, but he wasn’t exactly putting the cart before the horse.

Hooft helped Evans as well once he got to Florida, and the former UFC light heavyweight champion knocked Ortiz out in the second round. Hooft was intrigued, not just by Evans, but the entire Blackzilians crew.

“Rashad fought Tito Ortiz, beat him up good, and then after that he fought Phil Davis and he still fought good, and I really had a good feeling about Anthony Johnson, Michael (Johnson), and I saw the potential and made up my mind.”

He was staying. And the Blackzilians now had an experienced stand-up coach who had not just worked with the best strikers in the world, but was one of them himself. And while having been there before isn’t a prerequisite to be a top-quality coach, Hooft believes it helps.

“I think it’s a plus,” he said. “You can learn a lot of stuff from books, especially in team sports, where you may not need to be the best player ever or played in big leagues. But when you’re fighting, when you get hurt and you physically and mentally get tired, if you never went through that process, it can be difficult to motivate a guy who comes to you in that period, because you don’t understand that period. I understand that when you kick somebody’s elbows, your shin hurts, and I understand that you cannot kick. I also understand that you get very tired after one minute, so you need to train from the first minute you’re tired. Fighting is not for everybody. It is something that’s very hard, very cruel.”

Hooft knows it, both from inside the ropes and outside them. Inside, he was a terror, but Father Time and the game catches up to everyone, and it did for Hooft when he met Gokhan Saki in 2007.

“I was knocked out two times before, once with a kick on my liver and one with a punch in 110 fights,” he said. “So I didn’t have a bad chin. But I had never been knocked out like that, so I thought ‘my time is over.’”

The 45-year-old admits that he still thinks about fighting, but at the same time he knows that it’s not something that’s going to happen either. That chapter is closed.

“Of course I still want to fight and I still think I can do it, but I can’t train that hard anymore, and the sport has moved so fast forward that I’m doing it with coaching and it works good.”

There will be no complaints from his fighters, who aren’t reinventing the wheel with Hoost, but are learning the best stuff of all: simple techniques that work.

“It’s Dutch kickboxing, but Henri Hooft style,” he said. “It’s a little mixed up, a little bit different, but it still uses a lot of basic stuff that comes from Holland.”

The only catch is, if Hooft is working with you during training camp and in your corner on fight night, you better perform.

“That’s the mentality that I have,” he said. “I do very simple stuff, so I just want you to do the stuff that we train. I don’t let the fighters sit on the chair (between rounds) because we don’t do that in training. When I was fighting, I had a coach in my corner where I had just better show up and do what I trained otherwise he would just have that attitude that when we go back to the gym I’ll beat you up myself.”

It’s a funny line, but Hooft isn’t laughing. That’s how it was back then for him, and he wants his fighters to have that same level of intensity.

“Winning fights, you can’t look into the future, but you have to fight well,” he said. “That’s our attitude. And when you have that attitude, you can’t come into the corner and sit on the chair and tell me that you’re tired after five minutes because you trained for the whole training camp. That’s my way of coaching. I’m very into the fights, and it’s not playing. It’s the way I am and the way I always am.”

That doesn’t mean he’s a taskmaster with no heart. If anyone gets the fighter’s life, it’s Hooft.

“A lot of times you’re just scared not to perform or not to show up, and I was scared of my trainer, so it’s very important that you know about these things. And also, when you’re popular and winning stuff, everything is okay. When you lose two fights, you’re alone in your dressing room. If you never had that, you can never feel that with a fighter. I know the feeling. I know when it doesn’t work out. Fighters trust you much more than somebody who can talk good.”

They should trust him. And Hooft trusts his fighters right back, making this a relationship that has yielded plenty of good things in the last three years, but in his eyes, this is just the beginning.

“We’re still a young team – we’re just three years old,” he said. “But you see what we’ve done in three years. We have 13 people in the UFC, we’re one of the biggest camps, and we’re doing good. And my style of fighting is aggressive and we’re trying to knock people out, and that’s what we do. We’re not boring and just come to show up. No, we want to try and knock somebody out. That’s my mentality and it’s my mentality in life too. You either do it or don’t do it at all.”