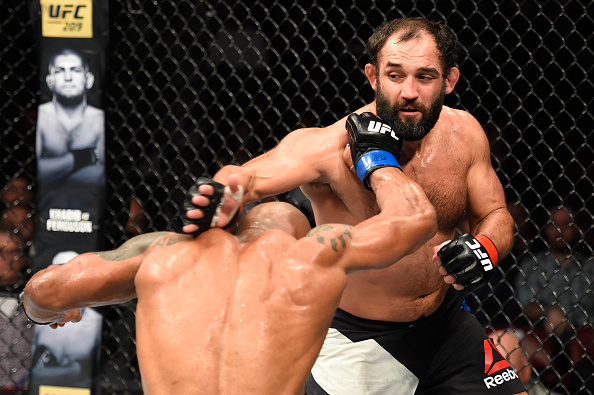 Former UFC welterweight champion Johny Hendricks made a successful jump to the 185-pound weight class Sunday night, as he won a three-round unanimous decision over Hector Lombard in the UFC Fight Night co-main event at Scotiabank Centre in Halifax.

Both fighters had their moments in a competitive first round, but Lombard may have edged it thanks to solid counters and some good clinch work. The second frame was even more clearly in the Cuban’s favor, as he controlled the action both at distance and close range. Hendricks did get in his shots, particularly some hard knees, but the more telling blows were coming from Lombard.

Hendricks’ upped his work rate in the third as Lombard slowed, and even a quick takedown didn’t deter “Bigg Rigg” in the final five minutes, as he secured the win on the scorecards.

Looking like an Octagon veteran in his first UFC bout, Halifax’ own Gavin Tucker thrilled the crowd for 15 minutes, winning a shutout three-round decision over featherweight vet Sam Sicilia. 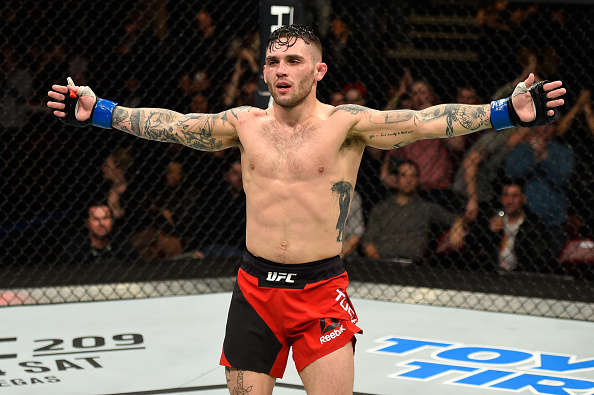 With his hometown crowd cheering him on, Tucker had an excellent first round, sticking and moving while keeping Sicilia from firing his bombs. The second round didn’t get any better for the Spokane native, as Tucker looked like he was having the time of his life in the Octagon, pecking and poking at his foe, who wasn’t able to get close at all.

In the third, Sicilia pressed and tried for the finish, but despite landing a couple hard shots, Tucker was unbothered by the blows, and when it was over, there was no doubt when it came to who the winner was.

Neither fighter scored much of note in the opening frame, and a pattern was quickly established of Theodorou being the aggressor while Ferreira looked to counter.

Ferreira got a takedown early in round two, but Theodorou smoothly got out of trouble and back to his feet. As the round moved past its midway point, Ferreira attempted the second of two guillotine chokes, but the Canadian easily pulled free and rose once more and the fight remained a close one.

The two continued to battle on even terms for much of the final round, but with 90 seconds left, Ferreira made his move, scoring a big takedown. He had the Canadian’s back for a spell as he looked for a choke, but Theodorou escaped and finished strong.

McMann stormed after Mazany as soon as the two were waved into battle, getting Mazany to the mat easily. The Las Vegan rose to her feet but was dumped a second time, and this time, McMann moved into the mount position and locked in the arm triangle that produced a tap out at 1:14 of the first round. 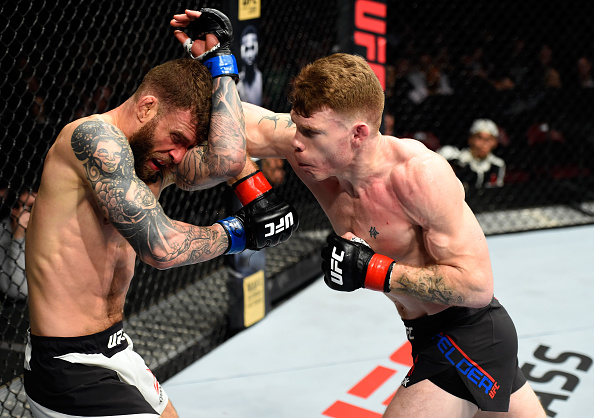 In a clash of lightweight strikers, Paul Felder was a step ahead from the start against Alessandro Ricci, and “The Irish Dragon” went home early, stopping Ricci in the first round.

Felder was sharp with his striking as soon as the fight began and he never allowed Ricci to get his rhythm. And when he landed a left elbow to the nose late in the frame, Ricci covered up and couldn’t recover, with Felder’s subsequent barrage of blows bringing in referee Brad Jardine to stop the fight at the 4:44 mark