Hendricks ‘A Little Meaner’ These Days

“My gameplan in this fight is simple: Keep moving forward.” - Johny Hendricks 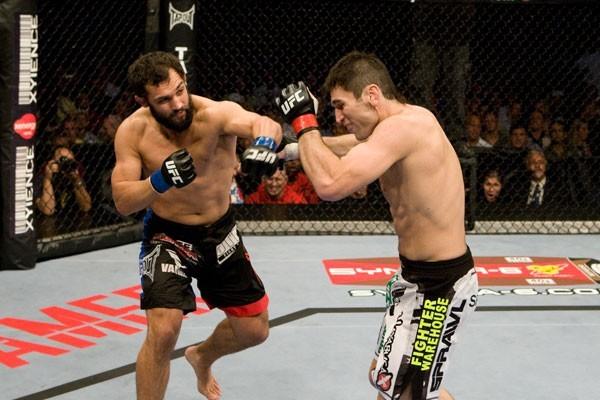 Tennis great Jimmy Connors unwittingly spoke for many elite athletes when he once confessed, “I hate to lose more than I love to win.”

That gung-ho mindset certainly rings true for Johny Hendricks. A professional loss isn’t digested as simply a “learning experience” for the habitual first-place finisher. The 27-year-old UFC welterweight sees losing as a nasty stain that the soul never washes away.

So when you hear Hendricks talk about his fight with Rick Story last December, the first loss of his pro career, the emotional pain that many fighters make peace with is still palpable as ever.

“The loss will probably haunt me until the day I die,” Hendricks said.

Anyone who knows the affable outdoorsman well, or has familiarity with his astonishing record of athletic excellence, knows that’s probably not an exaggeration, not just some off-the-cuff kind of remark.

Winning has shadowed Hendricks since childhood. As a high school wrestler, he won three Oklahoma state titles and a national title. In college, wrestling for John Smith and the storied Oklahoma State University program, Hendricks won two NCAA Division I titles. He had a crack at three national titles, having racked up a sterling 56-0 record headed into the 2007 NCAA finals. But it was not to be; Hendricks, a takedown machine, was stifled during a 4-3 upset loss to Iowa’s Mark Perry. A few months later, against the wishes of OSU coach Smith – who had encouraged Hendricks to pursue the Olympics – Hendricks fought MMA professionally. He had racked up nine straight wins before succumbing to Rick Story.

“I show my disappointment to my sparring partners,” Hendricks said. “It’s been a rougher camp for them. I’ve been a little bit meaner than if I had won the fight.”

But if you think Johny Hendricks’ hurt equals hostility toward his conqueror, you are sadly mistaken. Immediately after his loss to Story, Hendricks told him, “If you ever want to train together, you’re more than welcome.”

Story, who lives and trains in Washington state, accepted the invitation and traveled to Dallas to help Hendricks prepare for his upcoming fight versus T.J. Waldburger on March 26 in Seattle, Wash.

“Great kid. Great guy,” Hendricks said. “Him coming down to train let me see him outside of fighting. He’s a really nice guy. He’s strong and he’s ranked in the Top 10 now. I’m rooting for him now.”

Asked his impressions of Waldburger, Hendricks envisages a fighter who trusts more in his Brazilian jiu-jitsu skills than anything else. Fighting out of Belton, Texas, Waldburger (13-5) is riding a four-fight win streak. He has submitted 10 of his opponents, but winning in that fashion could be a tall order against Hendricks, who trains under world-class jiu-jitsu instructor Marc Laimon and has defeated numerous high-level BJJ grapplers in submission wrestling tournaments.

“My gameplan in this fight is simple: Keep moving forward,” Hendricks said. “I’m going back to that. I do way better when I keep attacking. I’m going to put pressure, wear him out and try to finish him.”

Hendricks normally travels to watch the NCAA wrestling championships to support the OSU Cowboys, but could not find time to attend the event in Philadelphia last week (Oklahoma State finished in fourth place in the team standings and had one national champion, 133-pounder Jordan Oliver). Hendricks said he is so busy and focused on his upcoming fight that he also did not catch the championships on TV.

He has, however, made time to watch replays of his loss to Rick Story. Sometimes Hendricks will watch video of the fight late at night, by himself. He estimates viewing the loss north of 20 times.