Hendricks' Focus is on the Title and Woodley 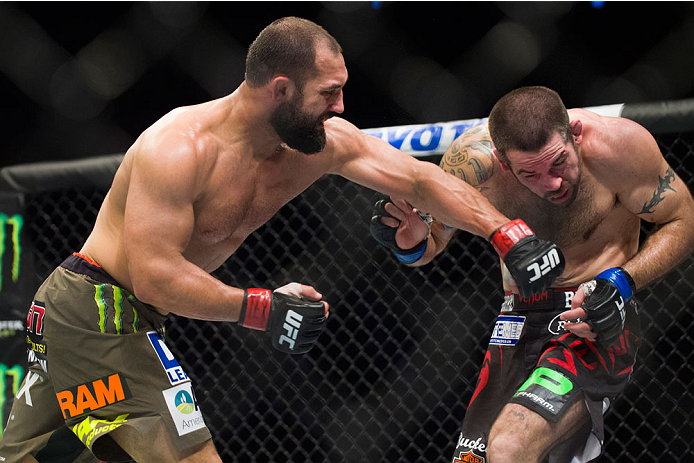 Look out Novak Djokovic and Roger Federer. Johny Hendricks has a tennis racket in his hand and he’s not afraid to use it.

“I like it because it takes movement,” Hendricks said of his new passion for the hard court. “It takes quick footwork, takes eye-hand coordination, and I didn’t have to run this morning because I played tennis.”

He laughs, but as he gets closer to Saturday’s UFC 192 co-main event against Tyron Woodley, which marks his 16th trip to the Octagon, the former UFC welterweight champion doesn’t mind a little break in the usual training camp routine.

“I get bored easy,” he admits. “I do get bored and I know it’s my fault, but whenever you’re sitting here and you’re practicing like this, you’re dying and you’re trying to do anything and everything you can to stay focused and stay where your head’s in the game. And towards the end of a camp, that’s where it’s always the hardest for me. We’ve got a month left, what can we do to spice things up and make it more enjoyable and not like a workout? The older I get, the more fun I want my stuff to be. The best way to explain it is, everybody gets to see the final product in a fight, but they don’t see everything it takes to get to where we’re at.”

So twice a week, Hendricks plays tennis, and yeah, a guy known for his knockout power in the Octagon has sent a few innocent balls flying over the fence.

“Yeah, I hit a couple, but I was pretty good today,” he said during a September 21 interview. “I can’t complain. Don’t get me wrong, I hit it hard, but I’m trying to use more spin so I can still stay quick with my hands.”

Is this preparation for a new athletic life after fighting?

“Oh no,” he said. “You know what this is? This is something that’s hard, but it’s not terrible.”

That doesn’t mean “Bigg Rigg” hasn’t thought about what he could do in the sport if he dedicated more than two days a week to it. That’s just what guys like Hendricks do.

“I don’t know any other way,” he said. “My coach laughs because he’s like ‘dude, you’ve only been doing it for two months and you think you should be a pro by now. Just relax.’ And I’m like ‘I can’t. I want to be the best I can be.’ It’s just the competitor in me.”

That competitor wants his title back, and he thought that he was going to get a third fight with Robbie Lawler after their rematch last December, but that didn’t happen, with Lawler going on to face Rory MacDonald in July and Hendricks beating Matt Brown in March. The fans aren’t complaining, as Lawler will meet Carlos Condit in January while Hendricks engages in what should be another fan-friendly outing against Woodley this weekend, but it is still all about the belt for the 32-year-old native of Ada, Oklahoma.

That kind of focus on something in the future could be distracting when you’ve got a dangerous opponent right in front of you, but Hendricks knows that without a win Saturday, he won’t be seeing the winner of Lawler-Condit anytime soon.

“Nothing matters if I don’t get through Tyron,” he said. “Yeah, I still want to get my belt back, and that’s all that’s on my mind. But if I can’t beat Tyron, then it doesn’t matter. So I’ve got to go out there and put all my focus on to him. It’s like wrestling in the National tournament. Yeah, you want to be the National champion, but you gotta get through five guys to raise that trophy. You know what you want, but you gotta take it one step at a time. The first step is Tyron, I go out there and fight the best I can, get my hand raised, and move forward.”

With two NCAA titles for Oklahoma State University under his belt, Hendricks obviously has some practice in taking matters a step at a time, and while he’s ready to win the UFC welterweight crown for a second time, he feels that he doesn’t miss that much about his first reign because life in and out of the Octagon is virtually unchanged for him.

“I’m still the guy that everybody wants to beat, and it’s still humbling and it’s still exciting,” he said. “I still enjoy it. I don’t necessarily enjoy the weight cut, but I still enjoy fighting. I still enjoy coming out here, getting better and getting stronger, and once that goes away, I’ll walk away. But I’m eight years into this, and I still wake up just as excited to go and train and to go see what I can do as a competitor.”

And as a competitor, if he does get past Woodley, does he want to finish up his trilogy with Lawler and get even for his razor-thin loss to the champ last year, or will a rematch with the man he defeated in 2013 – Condit – suffice?

“I don’t care,” he said. “I just want the belt. The only thing I’m hoping is that it (Lawler-Condit) is not a close fight where they’re like ‘there must be a rematch.’ Hopefully they say ‘you gotta fight somebody,’ and I can jump in there and fight whoever wins. If I have to fight Robbie again, that’s cool; if I don’t, that’s cool too. I spent a year training for that guy. It’s been nice to train for other people.”

What about taking care of this Lawler business on the tennis court?

“Even if I don’t win, I’m not gonna back down from a challenge,” he said. “I promise you that.”