Hendo: The Unbreakable Legend Rolls On 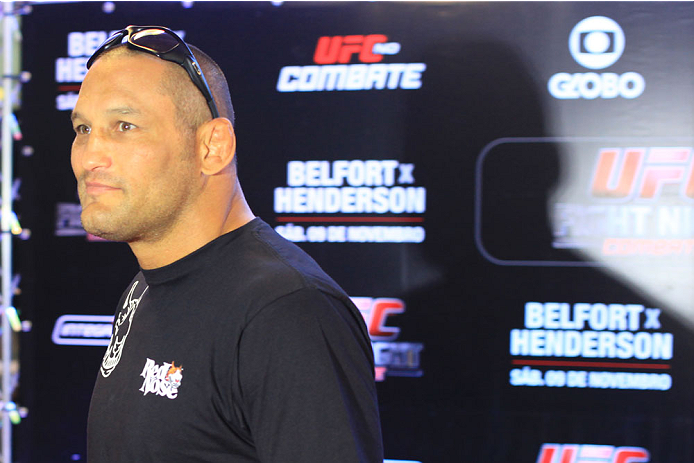 It is an inevitability in life that everything fades.

Gold once shiny tarnishes. Things once strong become weak. The best of a generation cycle out to make room for the next wave to flourish.

Apparently no one told Dan Henderson this is how things work.

At 43 years old, the former Olympic wrestler turned MMA legend is still at the forefront of mixed martial arts and is slinging his patented “H-Bomb” with as much ferocity as ever before.

With one of the most heralded resumes in MMA history to his credit and a pile of titles collected throughout his journey across the sport, it would be easy for the Californian to rest on past accomplishments, but that is just not how he’s wired.

Plenty in the Tank

There are still goals to achieve, fights to be had, and when the day comes where he can no longer compete with the best in the world, that is when he’ll look back. But that’s not happening now. Not by a long shot.

“I’m not really worried about legacy at this point,” Henderson said. “That is something where if I continue to set goals and achieve those goals, the legacy card will probably take care of itself. It’s not my goal to have a certain type of legacy. My goal is to have that UFC belt.”

Despite spending the better part of two decades trading leather inside a locked cage against the best fighters in the world, Henderson is still as game as they come. Where new fangled things are shinier and flashier in their quest to grab the public’s attention, Henderson is the tried and true product always standing at the ready.

While the current model of MMA has drifted away from the parallels to gladiators and warriors in the push for mainstream acceptance, Henderson is still that throwback to a different time. Much like the gunslingers of the old west who blow into a border town not so much looking for trouble but more than happy to oblige if trouble is brought their way, the savvy veteran doesn’t go into the public realm looking to pick a fight, but if one gets brought his way, guaranteed he’s willing to 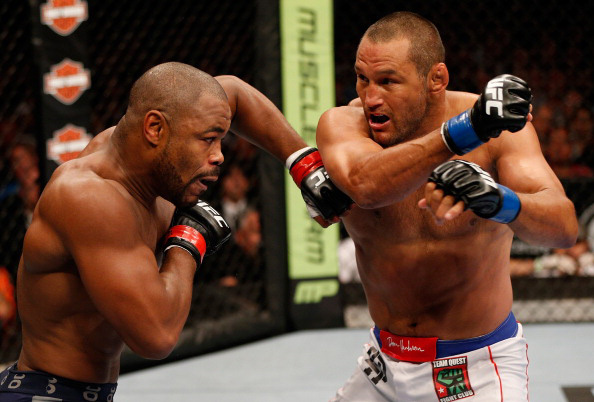 step up to the plate.

That said, even lofty descriptions as gunfighters and Roman heroes would barely get a shrug out of Henderson. He’s simply cut from a different mold, one where competition is and always has been the key factor, but an ingrained toughness is the salt of the equation. He’s going to test himself and see what his body can take, and if you happen to enjoy what goes down, then he’s happy to provide that entertainment.

Otherwise, it’s a quick round of beers before loading up the trailer to the next town and the next challenge. Just because that competition happens to come in the form of face-punching makes it a bit more suitable, but Henderson would treat anything with the same amount of measure temperament.

The next stop on his storied journey is a revisit to a throwdown that happened seven years ago with another throwback in Vitor Belfort. While the names on the billing will be the same, the impact of time and experience has shaped them both into different versions of the two men who locked up at PRIDE 32 in 2006.

Henderson has changed - as he knows Belfort has - and is expecting something a little bit different this time around. While he is planning for the outcome to be the same, and his hand to be raised at fight’s end, he’s ready for a different version of “The Phenom” when they step in at UFC Fight Night on Saturday night.

“It was a long time ago that we fought and we’ve both evolved a little bit as fighters since then,” Henderson said. “I am familiar with him but mostly because I’ve watched him over the years and not necessarily because I fought him before. He’s very dangerous and very tough on his feet especially. I’m looking forward to a pretty good battle here.”

When the two fighters cross paths again on Saturday night, the fight will occur at an interesting junction in their respective careers. Just north of a year ago, Henderson was sitting as the No. 1 contender to the light heavyweight crown, until injury and circumstance forced him back into the pack of the upper-tier at 205-pounds. Two razor-thin split decisions later, and he’s standing on the edge of the title radar with a difficult and uncertain road ahead if he’s looking to get back to the front of the pack.

“It was really frustrating,” Henderson said. “You change out the judges on those nights, have the same fight and the outcome could have been different. I could have been fighting for a title again and had that fight a lot of the fans never got to see, and the one I had already prepared for. It’s 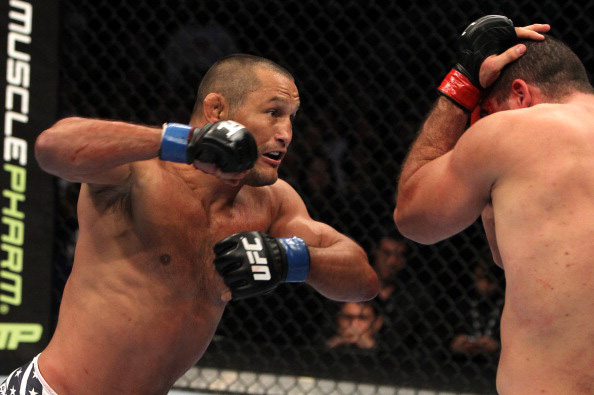 just frustrating and unfortunate, but you still have to move forward and see what’s next. You have to keep training harder and that is pretty much what I’ve done.”

As for Belfort, the past year has seen a re-ignition of sorts. Where his title hopes as a light heavyweight were dashed by pound-for-pound phenom Jon Jones, the 37-year-old Brazilian has returned to middleweight waters and sparked a red-hot run at the 185-pound title.

With the middleweight crown tied up for the time being, Belfort called out Henderson to fight in the interim. While Henderson isn’t entirely sure why Belfort called his number, what he is certain of is the position the Blackzilians-trained fighter is holding. He knows Belfort is sitting at the top of the middleweight heap and a victory on Saturday could easily catapult him to the front of a weight class he had left behind.

Henderson was once considered the best 185-pound fighter in the world, and toppling Belfort on Saturday night, could easily put a charge in another run in that weight class.

“I’m one of those guys that is very capable of fighting at middleweight and light heavyweight,” Henderson said. “And an impressive win over Vitor would definitely help me move closer to a title shot in either weight class, but probably more in the middleweight division since he is the No.1 contender. That being said, I’m not even sure why he chose to call me out and wanted to fight me. I don’t know if it is the smartest move for him at this point in his career, but it’s definitely going to be a tough fight for him.

“Yeah, I would absolutely entertain making a title run at 185, especially since the title shot is tied up for awhile in the 205-pound weight class,” he added. “It would probably be at least a year away for me. With [Jon] Jones probably not fighting again until April and it’s looking like he has another fight set up after that, it would probably take me at least two fights to get back to a title shot at light heavyweight. At my age, it would be a little bit tougher to cut weight, but we’ll see what happens. I’m more concerned with trying to beat Vitor up on Saturday.”

In addition to all the circumstances and storylines going into the main event tilt on Saturday night, one particularly interesting turn comes with where the bout is taking place. Brazil has quickly become one of the most intimidating environments in all of combat sports, especially where American fighters are concerned. The fan base is lively and passionate, but where the majority of foreign fighters coming in have the crowd to battle with, Henderson sees things from a different perspective.

It was on Brazilian soil back in 1997 where his career started and Henderson is excited to return for such a high-profile affair. Throughout his career he’s traded punches, elbows and kicks with a litany of their icons and his battles with the likes of Anderson Silva, the Nogueira brothers and Wanderlei Silva are the stuff of MMA legend.

While those fighters attempted to reach greatness, somewhere along the lines they had to face Henderson, and his story goes hand in hand with theirs. And in that, such a fitting turn for a man 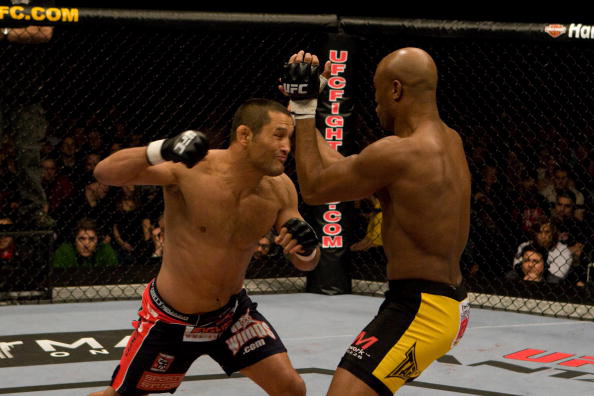 who has done what he’s done the way Henderson has done it.

One more crowd. One more fight. Henderson will give his all against Belfort in front of a wild Brazilian crowd and further give credence to him being walking embodiment of the often-used and rarely-meant saying, “Anytime. Anyone. Anywhere.”

On Saturday night, while the Brazilian collective will be standing firmly behind one of their greatest legends and one of the kings of the sport they consider their own, they are a people who love fighting through and through - and in that - Henderson is just as much one of theirs as he is one of ours.

He’s as “All-American” as they come, but Henderson is a fighter in its most simple and brutal form. That makes him a translator of the universal language of hand-to-hand combat, and there are few who have ever done it better.