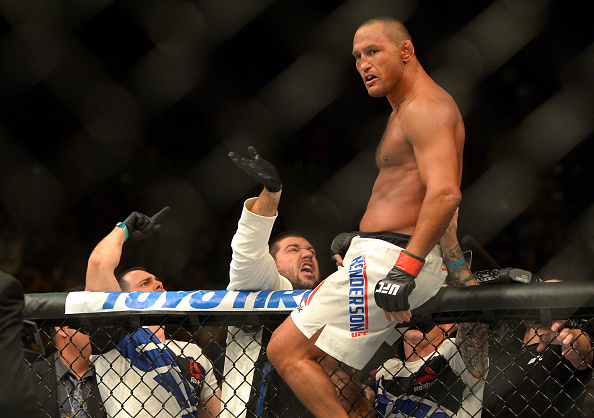 Tom Cruise put it best in the movie “Cocktail” when he said, “Everything ends badly, otherwise it wouldn’t end.” And that’s usually how it goes in the fight game, but last Saturday night, Dan Henderson flipped the script on that phrase, which was fitting for a guy who once carried the nickname “Hollywood.”

So while the man UFC fans knew as “Hendo” didn’t get to walk off into the sunrise in Manchester, England with a championship belt slung over his shoulder, his five-round rematch with Michael Bisping was as close as any fighter can come to a Hollywood ending. Simply put, Henderson got to leave on his own terms with his head held high.

No one left that arena on Sunday morning with the idea that at 46, Henderson had nothing more to give to the sport he competed in for over 19 years. He had just gone 25 minutes with the middleweight champion of the world, and after nearly knocking Bisping out on two occasions, only a couple points on two judges’ scorecards separated him from the title.

That old man leaves the game with one of the best resumes ever turned in by a professional prizefighter. In a sport where there is little to no room to pad a record, Henderson’s 32-15 slate makes other fighters’ output look questionable. Just look at the list of current or former UFC champions he has shared the Octagon or ring with:

“It really doesn’t do me any good testing my own skills to better my career to fight guys that aren’t top ranked,” Henderson told me before his UFC 75 bout against Jackson. “So right from the get go, I was hoping to fight the top guys.”

The Downey, California native got his wish, but showing up isn’t enough. You’ve got to be able to compete against the best and win, and few did it like Henderson, a member of the 1992 and 1996 United States Olympic team in Greco-Roman wrestling. From the time he strapped on the gloves, he used his wrestling attack and a crushing right hand dubbed “The H-Bomb” to take on all comers. Hendo was there in the days of one night tournaments, of wild times in Brazil, and of fighting the best opposition in the world for little recognition outside of the MMA world.

“The first crowds I remember were in Brazil because they were throwing stuff into the cage and they rushed the cage because the ref stopped the fight,” Henderson recalled with a chuckle in 2007. That night he beat Crezio de Souza and Eric Smith, winning the Brazil Open and getting a crash course in his new day job.

Eleven months later, he did the same thing in the UFC, with Allan Goes and Carlos Newton his two victims as he picked up the UFC 17 middleweight tournament crown. It would only get crazier from there for Henderson, who went on to fight in Japan for the next seven years. In a Rings tournament in 2000, he fought a murderers row of Gilbert Yvel, Minotauro Nogueira and Babalu Sobral on the same night, beating them all. Then it was off to PRIDE, where he became the first and only fighter to hold two divisional titles in the promotion, and he held them simultaneously.

But to many, it was in the UFC where Henderson’s legend was cemented. And while there was a short Strikeforce stint (which included a light heavyweight title and an epic win over Emelianenko) that broke up his final run in the Octagon, his fights with Rua and his knockouts of Bisping and Hector Lombard endeared him to a new generation that knew little of PRIDE, let alone his exploits in two Olympic games. For this crowd, Henderson was the sport’s elder statesman, a guy who didn’t say much, but who carried a big stick in the form of his right hand, and those knockouts and fights would be his calling card.

“This is a job and a career and it’s a sport,” Henderson said before his 2009 win over Rich Franklin. “And you know that’s just the way it is. We do go in the gym and try to beat up some of our good friends, and you know it’s really no different going out there (to fight). I don’t need to generate any anger or dislike towards any opponent. I’ve never done that even if I really don’t like him. I don’t focus on that. I just focus on what I want to do and on my training and everything else.”

This was never more evident than in the defining moment of his career on November 19, 2011. Matched up with another former PRIDE star in “Shogun,” Henderson and the Brazilian icon were all class before and after their bout, but for 25 minutes in the main event of UFC 139, they fought like bitter enemies, delivering what may be the greatest fight in the history of the sport. It was that good.

Henderson won that fight, and the rematch with Rua in 2014, yet what’s remarkable is that nearly five years after the first bout, Hendo was fighting for a world title at 46, and he nearly won it, making it crystal clear that we won’t see the likes of Dan Henderson in this sport anytime soon, if ever.

That kind of legacy carries more weight than any championship belt.