Dan Henderson already had one heck of a farewell from the UFC. The question is, can he do it all over again?

Back at UFC 199 in June, Hendo, 46, talked openly in the buildup about stepping away from MMA no matter the outcome against Hector Lombard. Then, as if following a movie script, Henderson got a KO win in front of his home crowd in Southern California – including well over 50 of his friends and family in attendance that night at The Forum in Los Angeles.

A fitting farewell for one of the most prolific fighters in combat sports.

Then a funny thing happened. Just a few minutes after Henderson’s win in that very arena, Michael Bisping shocked the world when he defeated Luke Rockhold for the middleweight championship on short notice in the main event.

Forget the retirement script Henderson just created: It was time for a rewrite. Bisping vs Henderson 2 at UFC 204 this Saturday night in Manchester, England beckoned.

“The last fight, I had in my mind that it could be my last fight,” Henderson said. “But given the opportunity at a title I had to say yes. I’m looking forward to the opportunity.”
RELATED: Watch Bisping vs. Hendo 1 from UFC 100 free | Watch Bisping win the title vs. Luke Rockhold free | UFC 204 Embedded - Ep. 2 | Episode 1 | Dan Hardy and John Gooden preview Bisping-Hendo 2

That’s exactly what happened. Almost immediately after Bisping’s win, a rumbling began among fans who wanted to see a rematch of the UFC 100 classic between the two titans of the sport, one which Henderson won in dramatic fashion in the second round with a flying elbow that continues to be a staple of KO reels.

“(The Bisping fight at UFC 100) that’s been the one that fans want to talk to the most about. They thank me for that,” Henderson said. “It’s kind of fun for me, but it’s one of those things that’s just is what it is. I did a good job that night 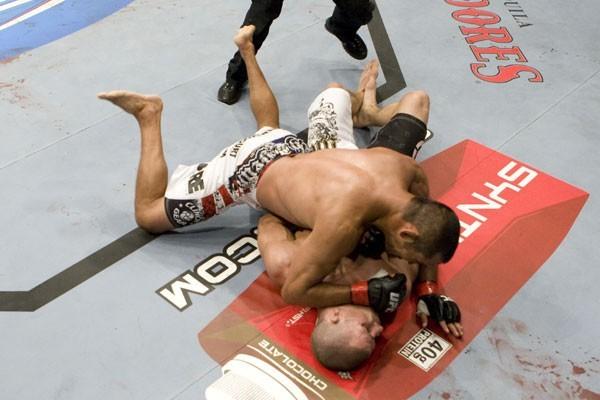 and people like to see him lose. It probably helps that he ran his mouth so much that people wanted to see that happen.

“I didn’t have to think (twice) about (taking the rematch). Obviously if they are going to give me a title shot, something I thought I was a little further away from than that, but I think just because the fans were asking for this fight and Bisping was asking for it also that made it happened. I didn’t expect it, I didn’t ask for it – and I didn’t hesitate either to say yes.”

But this is far from just a crappy Hollywood sequel or about a final payday. Henderson has said he plans on walking away from the sport, win or lose, after Saturday night’s headlining bout from Manchester Arena. And for all that Henderson has accomplished in his career — two-time Olympian, former PRIDE champion, the second-most winningest fighter in major MMA history (UFC/PRIDE/Strikeforce/WEC combined) with 25 career victories – one thing is missing: a UFC championship belt.

“To have an opportunity at a title in my last fight would definitely be the crowning moment of my career, which would be nice,” Henderson said. “It’s all about the UFC belt at this point. I could care less who it’s against. It’s a title fight and it doesn’t matter if I beat him before or lost to him before. What matters is what happens on Oct. 8. I’m going to make sure I take full advantage of the opportunity to get a belt.

“I’ll still be doing my best to put my fist through his face.”
Jorge A. Mondaca is managing editor of UFC.com. Follow him on Twitter at @JorgeAMondaca