Henderson, Edgar Do It Again in Denver on August 11

UFC lightweight champion Benson Henderson defends his title for the first time on August 11th against the man he won the belt from, Frankie Edgar... 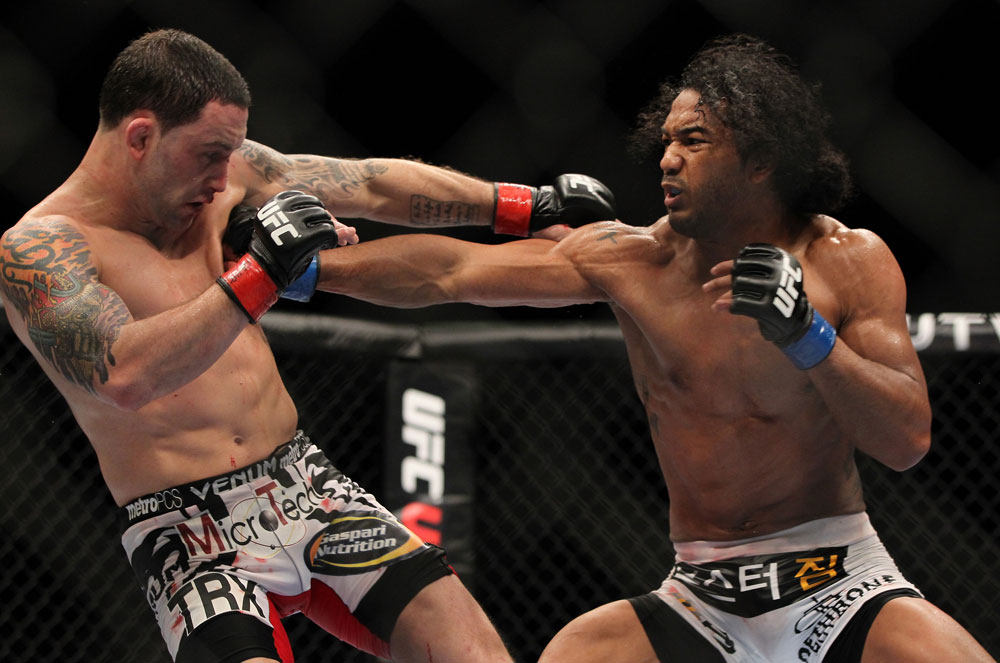 If you’re tired of seeing winners of multiple Fight of the Night awards battle in proverbial five round wars, then maybe the UFC’s lightweight division isn’t for you.

For the non-cynics who love seeing the best battle the best, it’s officially time to begin eagerly anticipating the August 11th title rematch between challenger Frankie Edgar and champion Benson Henderson. At the Pepsi Center, a kilometer from Mile High, in Denver, Colorado, the two darlings of the UFC’s proud 155 pounders will re-engage for rounds six thru 10 in a rematch following their Fight of the Night battle at UFC 144 in Saitama, Japan. In the original bout for the belt, fight fans saw 25 minutes of back-and-forth action, gutsy performances, and a former WEC titlist crowned a UFC champion.

What can Octagon enthusiasts expect from the division’s elite in the return bout at UFC 150?? Simply, more and better.

At Tuesday’s press conference hyping this main event clash between the combined nine-time Fight of the Night winning rivals, Henderson and Edgar agreed that they’ll need to be better to even stand a chance in these five extra rounds. “If I don't get better, then he's going to beat the crap out of me,” admits Henderson, whose sentiments are continued by Edgar about how essential their evolution is for this outing. “Steel sharpens steel. I can't go in as the same guy. You have to make adjustments and you have to apply them right away and apply them better.”

It wouldn’t be a proper media event featuring the former UFC lightweight champion Edgar and UFC President Dana White, if the questions weren’t dominated by the ongoing hypothetical discussion of “The Answer” dropping to featherweight. Long story short, Edgar barely cuts weight to make 155 pounds as opposed to bigger opponents like Henderson, and White believes Edgar should try out the lighter weight class. It’s a valid argument with fighters trying to gain any advantage they can, but Edgar’s phenomenal success in the lightweight division in the Octagon is hard to argue with, and it deserves all the respect it gets.

“I think the rematches that have gone on with Frankie Edgar have showed that this guy is very tough and durable,” asserts White. “I believe he should be at 145 pounds; he doesn’t agree with me. To be honest, the fact that I believe he belongs at 145 pounds and the fact that he’s held the title and beat the list of the guys he has at 155 pounds - the guy is an incredible fighter, tough, durable guy, and an amazing athlete. And, man, would he shine at 145 pounds, but he wants to stay at ‘55.”

In February, the 14-2-1 Edgar continued his role as the UFC’s “Rocky,” as an upkick in the closing moments of the second round opened Edgar’s nose like a faucet. The deluge of hemoglobin did not appear to affect him too much, as he continued trading fists, feet, and takedowns with Henderson for 15 more minutes. The rematch in Denver will be Edgar’s third in 12 Octagon appearances, all with title on the line. In the previous two rematches, “The Answer” won more impressively in his second decision win over B.J. Penn and scored a Knockout of the Night over Gray Maynard last October.

The sky's the limit for “Smooth,” who lost the WEC lightweight belt in the final WEC bout and in four fights inside the Octagon has made the UFC lightweight belt his own. Henderson’s lone Zuffa defeat to Anthony Pettis via unanimous decision in 2010 has been more or less repealed by an undefeated streak of UDs in the UFC over Mark Bocek, Jim Miller, Clay Guida, and Edgar. For the Colorado Springs native, this bout will have a partisan hometown crowd as Henderson makes his first of a self-expected many title defenses. Simply put, “Smooth” wants to face the best fighters on the planet, whether that means a rematch or not.

On August 11th at UFC 150 in Denver, Colorado, the #1 and #2 lightweights in the world will collide for the second time this year, for the belt, and, hopefully, for another Fight of the Night. Both share a Spartan mentality supremely focused on belts instead of BS, and success instead of soundbites. Neither Edgar nor Henderson are ones to talk trash or create drama; they come to fight, they come to win, and they come to put on a show for the fans. It’s the title fight rematch that fans should have wanted and should have expected, as all five round wars deserve another.