Henderson and Guida Break Down Pettis vs. Melendez

"Hopefully both guys go out there and are a hundred percent, they both give their all, they both have great performances, and let the chips fall where they may." - Benson Henderson 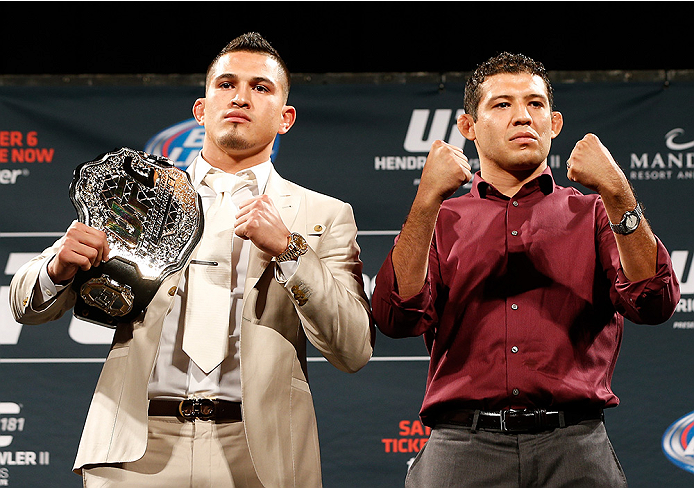 Fans and pundits can break down fights all day, and it’s always an interesting – and often informative – process, but when it comes down to it, few know fights and fighters better than those who have set foot in the Octagon.

So with UFC 181 coming up on December 6, who is more qualified to discuss the co-main event between lightweight champion Anthony “Showtime” Pettis and Gilbert “El Nino” Melendez than two men who have faced them both: Benson Henderson and Clay Guida?

A former UFC and WEC lightweight champion, Henderson ruled the 155-pound weight class in the Octagon from February of 2012 to August of 2013, and in the six-year period from June of 2007 to August of last year, the only man to beat “Smooth” was Pettis, who defeated him for those WEC and UFC titles. As for Melendez, Henderson successfully defended his UFC belt against him via split decision in April of 2013.

Fan favorite Guida, a standout at 155 and 145 pounds, lost his Strikeforce lightweight title to Melendez in June of 2006 via split decision. Nearly five years later, “The Carpenter” ruined Pettis’ UFC debut, winning a three-round unanimous decision. It was the last time Pettis lost, begging the question, did he put together the blueprint to beat the current lightweight king?

“To me, it was simple,” Guida said of the Pettis fight. “I just went out there and just did it. There are no easy fights, but that was one of my more basic fights where I just got in the guy’s face and didn’t really give him time to get off his fancy and fine-tuned striking, because that’s where he’s most dangerous.”

Pettis, 27, is one of the most gifted strikers in the sport today, capable of not just the basics, but of techniques fight fans haven’t even seen yet. But to perform those highlight-reel maneuvers, he needs his space, and the swarming Guida wouldn’t give it to him on that night in 2011.

“Once he (Pettis) starts getting his range and starts getting comfortable in there, that’s when he starts unloading his pinpoint punches and kicks,” Guida said. “A striker like an Anderson Silva, Anthony Pettis or my teammate Cub Swanson, once you give them space and they start getting their footwork down, they’re very, very tough to deal with and that’s when they start hurting guys. Frankie (Edgar) was the prime example of it the other night. They got into a few exchanges, then Frankie found the timing, he got his level changes, and he just stayed glued to Cub and kept him on his back. I didn’t let Anthony be Showtime. I got in his face and kept him backpedaling. If you notice, most of the times when I got my takedowns, I would get him backpedaling, I’d give him a split-second, he would throw a strike and I would just duck underneath him and get my single or double leg and blast right through him. I stuck with what I knew – try not to get hit too much and put those guys on their back. I didn’t let him get off his strikes and I did a little ground and pound from the top.”

Henderson is a pressure fighter as well, and while he was submitted in the first round of their UFC title fight, in their first bout in the WEC in December of 2010, the Arizonan not only had a lot of success in defusing Pettis’ stand-up attack, but going into the fifth round of the fight, the last five minutes was going to decide who walked away with the win. Of course, that was the round when Pettis pulled off the remarkable “Showtime” kick off the cage that dropped Henderson and sealed the victory on the scorecards, but before then, it was a close fight, and “Smooth” believes that for Melendez to win, he has to put doubt in Pettis’ head from the opening horn.

“I think this is going to be a very close fight,” Henderson said. “I see both guys having the potential to win, but that being said, I think what it’s going to boil down to is Pettis not being afraid to throw things, whether it’s an armlock in the first round against a guy who has great submission defense or a pretty awesome kick off the cage in the fifth round. That’s the reason why he (Pettis) is so good – he throws unorthodox stuff and he’s not afraid to throw it. What Melendez needs to do is put the fear in Pettis. He needs to make Pettis afraid of doing this. Pettis has a couple losses on his record – he lost to Clay Guida who had control the entire time, he lost to Bart Palaszewski – and there’s a blueprint on how to beat Pettis, and part of that is making him afraid. Gilbert needs to hit him hard with a good two and let his hands go, or capitalize when Pettis goes for something and leaves an opening. He needs to punish Pettis for that and make him hurt so that Pettis is more wary to throw up stuff later in the fight.”

The simple consensus when it comes to analyzing the fight is that it’s Pettis early, Melendez late. That’s usually how it plays out in a striker vs. grinder matchup. But what about the long layoffs both will be coming off on December 6, Pettis nearly 16 months and Melendez nearly 14? Henderson doesn’t see it being a factor for either man, considering much of the delay for both was self-imposed as they competed as coaches on The Ultimate Fighter 20. Guida agrees with this not being an issue since both are coming off basically the same amount of time off.

“They’ve both been out over a year now, so there’s a lot at stake there when it comes to momentum, when it comes to building up to fight and being physically ready,” he said. “But if we can put a checkmark in the middle column, I don’t give momentum to anybody. You can say these guys are well-rested, their bodies are healed, and they’re going to come out like bats out of hell and I think they’re going to be wanting to take each other’s head off. It’s gonna be exciting.”

The most exciting part for Guida will be watching the chess match between the two. Of course, Pettis is seen as the striker and Melendez the grappler, but as he points out, both have some underrated tools in the other’s wheelhouse that could shake up conventional wisdom a bit.

“Gil is a very polished striker now,” Guida said. “He’s an awkward striker, and he’s big. He’s got a great sprawl, so he can keep you at bay with his jab and his cross, and everything he throws is straight down the middle and he uses that to his advantage. He also keeps his legs back so it’s hard for people to shoot on him. And though Anthony is still a very skilled and dangerous striker, I tell people this to this day – of all the black belts and world-class jiu-jitsu guys that I’ve fought, Anthony Pettis has the best, most dangerous guard I’ve ever been in. The whole time I was on top I had to keep repositioning and defending triangles and armbars. It was crazy. I could never really get set up for dominant ground and pound. People know how to beat him by watching him; people don’t know how to beat him by getting in there since I fought him.”

So if we’ve got this straight here, Pettis the striker has an underrated ground game and Melendez the grappler can surprise with his striking. Sounds like we’ve hit a stalemate, which forces us to bring up those intangibles that can often separate a champion from his challenger on fight night. That means a look at the championship rounds, a neighborhood familiar to Melendez from his days as Strikeforce champion, but a place Pettis has only visited once, back in the WEC against Henderson.

“I give the slight edge to Gilbert because he does have that five-round experience,” Henderson said. “We know that he can go five rounds hard and Pettis has never been there in the UFC before. In his fight against Clay Guida, he didn’t look like he quite had it in the third round. He looked a little bit frustrated, a little bit tired, and he wasn’t quite there. We know Gilbert has had some five-round wars with Josh Thomson back in Strikeforce years ago so we know he can get there. His fight against me, that was a great five-round affair, and the nod went to me, but he was there in the fifth round, pushing the pace and trying to do his thing. So I give the slight edge just for championship experience.”

Interestingly, Henderson puts a lot of weight on Melendez going a full five rounds in the UFC, saying that doing it in the big show is a lot more telling than doing it elsewhere.

“Pettis has the belt, but he doesn’t have the experience,” Henderson explains. “His one five-round fight was against me in the WEC, before we even made it to the UFC, so anything before somebody gets to the UFC almost doesn’t even count. It does count, it helps for experience to get used to it, but you have a WEC or Strikeforce guy come to the UFC and it’s ‘okay, let’s find out what you’re really made of.’ When you’re talking about the big leagues, Gilbert is the only one that has that five-round experience.”

And having been in the fifth round with both Pettis and Melendez, who does Henderson give the edge to in those final five minutes if it goes that far?

“Both guys come out at a hundred percent, and everybody – myself included – drops down to a working rate of 75 to 85 out of a hundred (in the fifth round),” he said. “I think Gilbert’s working rate is definitely a little bit higher than Pettis’, because Pettis is flashier. He sits and waits and throws a flashy kick, and he repeats this, so his work rate is a little lower. Gilbert is a grinder, he likes to throw punches in bunches and combinations, so the work rate edge goes to Gilbert for the fourth and fifth rounds.”

With so many different angles to look at and so many unanswered questions, Pettis vs. Melendez is what a championship fight should look like. And Henderson and Guida will certainly be watching next weekend.

“This fight is a toss-up, and the intangibles will be brought to the forefront that much more,” Guida said.

“Hopefully both guys go out there and are a hundred percent, they both give their all, they both have great performances, and let the chips fall where they may,” Henderson adds. “Whoever the better man is that night, let him get his hand raised.”