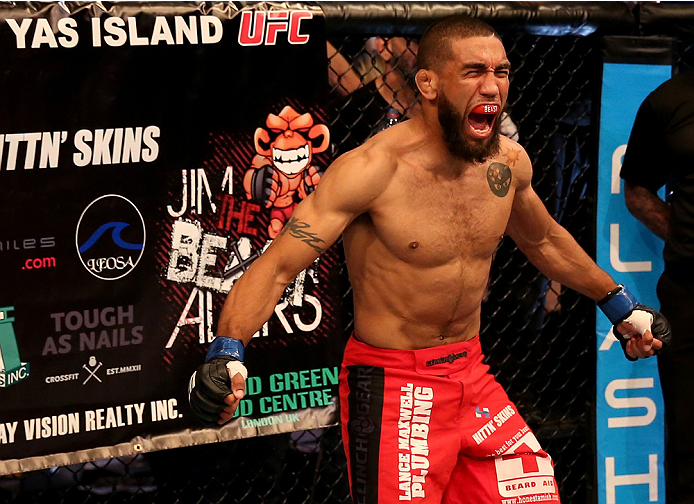 Unbeaten during his world tour and a winner of nine straight overall, the Florida native will be able to leave his passport at home prior to his next fight, as instead of heading overseas, the featherweight will step into the Octagon in Broomfield, Colorado as part of the preliminary card for next weekend’s UFC Fight Night event at the 1stBank Center.

“It’s a little weird,” Alers says about fighting in North America for the first time since collecting a first-round submission finish over Noe Quintanilla in February 2012. “I’m leaving early just so I can get that familiar feeling.”

After establishing himself as one of the top featherweights competing outside of the UFC, Alers answered the call to the Octagon and shipped off to Abu Dhabi for his promotional debut, picking up a split decision win over fellow newcomer Alan Omer in an entertaining back-and-forth fight to kick off the April Fight Night event headlined by Roy Nelson and Antonio Rodrgio Nogueira.

Back for a sophomore appearance under the UFC banner opposite Lucas Martins in July, an injury forced “The Beast” to withdraw from the contest and he’s been sidelined since. Having racked up six fights in the two years leading up to 2014, being kept out of the cage was a new feeling for Alers, but he used the time off to his advantage.

“I moved from Orlando to the Fort Lauderdale area, which is about three hours away,” he says. “When I was in Orlando, I was in a small school, very few fighters and stuff, and I was kind of getting used to being a big fish in a small pond. I came down to South Florida to be closer to family, get different training and so far I’m loving it.

“In Orlando, I was going from gym to gym to gym trying to find people to train with. Don’t get me wrong – they got me into the UFC. They did what they needed to do, helped me out and it’s because of them I got into the UFC, but it’s very hard to travel around always looking for people.”

Since relocating, Alers has been welcomed in by the all-star cast of coaches and fighters at American Top Team in Coconut Creek. Long considered one of the best camps in the business, he has nothing by high praise for his new camp, even if his time on the mats started with a few friendly beatdowns.

“At first, I was getting my ass whooped all the time,” Alers, who squares off with fellow 13-1 featherweight Chas Skelly on Saturday night, laughs. “But over time you start to pick up things and they’re all very helpful. I started to learn from them slowly, but surely, and I feel myself just getting better and better.

“I have top-notch fighters that I get to train with every day,” he adds. “I understand that the level of the UFC is very high. I needed to dedicate myself full-time to training and I don’t think there is a better place than American Top Team headquarters, where everything is in one spot.”

With new roots established in South Florida, Alers was looking for an opportunity to shake out of the routine he had fallen into as a result of being sidelined and a chance to re-introduce himself to the UFC audience.

“I think I got used to being what I call ‘a normal person,’” he admits with a chuckle. “I was waking up, doing things that normal people do, training casually and I needed something to ignite that fire again. I was begging for a fight after I was cleared from my injury and I’m thankful that I finally got one, especially here in the United States.

“I’ve been away now for almost a year; I haven’t fought since, what, April?” he queries correctly. Though he ultimately came away on the happy side of the scorecards against Omer, Alers admits that he got a little caught up in the moment once it was time for his UFC debut to begin.

“People talk about the UFC jitters and stuff and, at the time, I thought I wasn’t going to get them. I didn’t feel like I did all the way until the time I stepped into the cage. That’s when I noticed the amount of people in the stands and how the floor felt and everything; that’s when it hit me.

“It took me a little bit – the first round didn’t go the way I wanted it to and it took me a round to realize, ‘This is for real.’ It felt great to go in there, come out with the win and show people what I can do.”

That’s what he intends to do again on Saturday night and he sees Skelly as the perfect opponent. The 29-year-old Team Takedown member dropped his promotional debut to another of the top up-and-coming competitors in the featherweight ranks, Mirsad Bektic, before earning consecutive victories over Tom Niinimaki and Sean Soriano two weeks apart.

After going to the cards with Omer in his debut, Alers has no interest in spending 15 minutes in the Octagon with Skelly this time around.

“I go out there to finish fights. I have 11 finishes on my record – nine submissions and two knockouts – and I’m looking to add to that for sure. A lot of people in the United States don’t know who I am because I’ve fought overseas so much, but now it’s time to show them.”