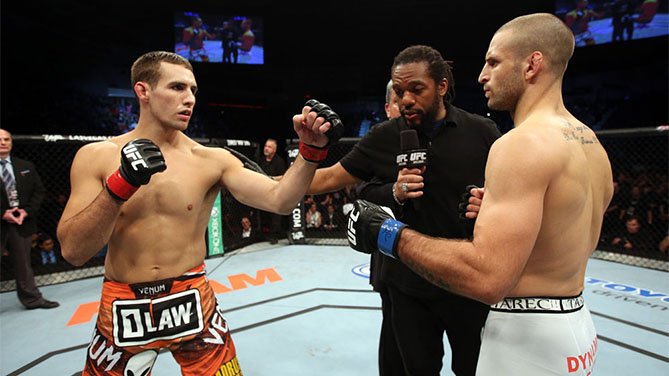 Number two-ranked welterweight contender Rory MacDonald won the big one Saturday night at Scotiabank Centre in Halifax, Nova Scotia, Canada, knocking out Tarec Saffiedine in the third round to cement his spot as the next man to challenge for the welterweight title Johny Hendricks and Robbie Lawler will battle for in December.

“I think it goes without saying that I’m next for that title,” MacDonald said. “I want that title shot and I want the winner of the next fight.”

Standing in the pocket for much of the opening round, MacDonald impressed with a variety of strikes, including Saffiedine’s trademark leg kicks, and the Canadian even picked up a takedown as well in the first five minutes before eating a couple leg kicks from the Belgium native in the closing moments of the round.

Saffiedine got busier in the second, but MacDonald matched and then surpassed his opponent’s work rate, leaving the “Sponge” to go back to his corner with a frustrated look on his face.

In the third, Saffiedine made a concerted effort to lead the action, and he scored well in the opening minute. In the second minute though, a left uppercut crushed Saffiedine and sent him to the deck. A series of right hands ended the bout, with referee Herb Dean stopping matters officially at 1:28 of the third frame.

With the win, MacDonald, who hadn’t finished a fight since an April 2012 TKO of Che Mills, ups his record to 18-2; Saffiedine, who was stopped for the first time in his career, falls to 15-4.
> Watch: Rory MacDonald Octagon Interview | Rory MacDonald Backstage Interview 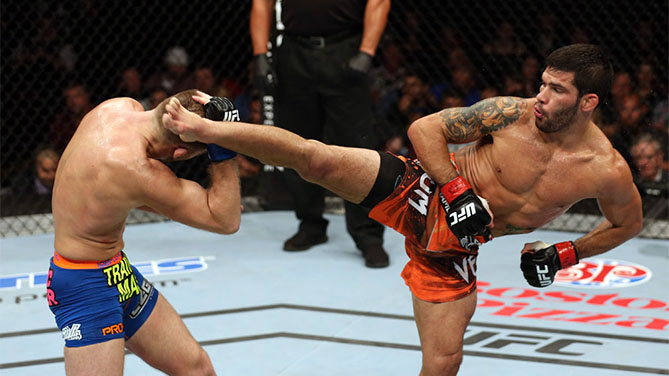 Despite knowing that former bantamweight champion Dominick Cruz is next in line for a shot at current titleholder T.J. Dillashaw, Raphael Assuncao made his own statement in the co-main event by decisioning fellow contender Bryan Caraway to pick up his seventh consecutive victory.

The first round was competitive, but it also belonged to Assuncao, who cut Caraway under the eye, battered his leg with kicks, and scored a takedown as well in the opening five minutes.

After two minutes of business as usual for Assuncao, Caraway got his first takedown in round two, but the Brazilian rose to his feet almost immediately. A minute later, Caraway scored another takedown, Assuncao again rising quickly, but it was getting “Kid Lightning” on the board. Assuncao wasn’t getting flustered, and even though he was landing flush shots, Caraway wasn’t moved by the blows, leading to some solid exchanges in the closing moments.

Fatigue set in for both men in the third, and with Caraway not able to keep the pace high, Assuncao settled into an offensive groove that saw him put together some of his most impressive work of the fight, as he scored a flash knockdown and nearly sunk in a guillotine choke as he coasted to victory. 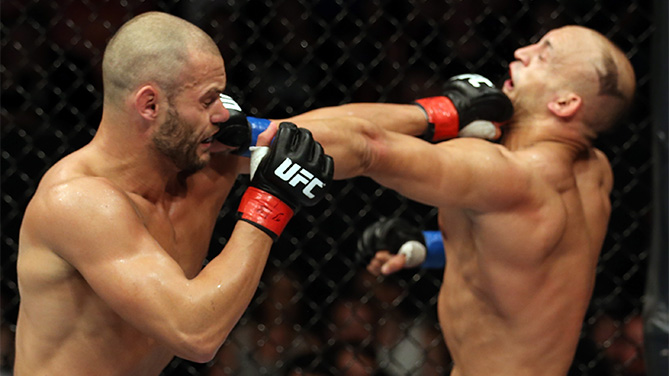 Montreal’s Chad Laprise followed up his TUF Nations win in April with a second Octagon victory, as he won a clear-cut 30-27 unanimous decision over Yosdenis Cedeno in lightweight action.

Cedeno’s active and unorthodox style could cause any fighter problems, but Laprise stayed disciplined with his striking, and when the opportunity presented itself in the third minute, he scored a takedown, moved into the mount, and then took the Cuba native’s back. Cedeno (10-4) was able to reverse position with under a minute left, but Laprise got back to his feet easily, finishing off an impressive round.

Whether standing or on the mat, the steady Laprise continued to pile up the points in the second and third rounds, with Cedeno unable to get any sort of offense going. It wasn’t the most compelling fight, but it was another solid win for Laprise, who ups his record to 10-0.
> Watch: Chad Laprise Backstage Interview 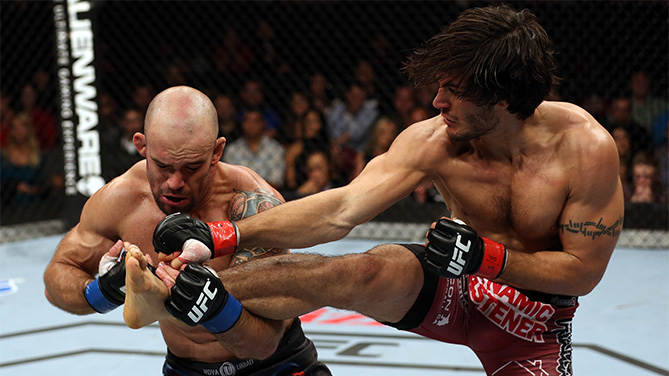 The Ultimate Fighter Nations winner Elias Theodorou got his post-TUF career off to a good start as he won a three-round unanimous decision over Bahia, Brazil’s Bruno Santos.

Toronto’s Theodorou did well with his striking and grappling in the opening three minutes, but it was Santos who scored the takedowns, making it an interesting dilemma for the judges. The Canadian surged late though, trying to pull away before a hard right to the head by Santos.

Staying a step ahead of Santos throughout much of the second round, Theodorou survived some dicey moments when the Brazilian took his back in the final minute, but as Santos tired, “The Spartan” surged.

Santos got the takedown and took Theodorou’s back again early in round three, but the Canadian escaped, and after rising he delivered three takedowns of his own. After the third, Theodorou got into the mount position and then took his foe’s back, nearly sinking in the rear naked choke. Santos’ defense was solid as he got back to his feet, but he had nothing left to offer as the seconds ticked away on the fight. 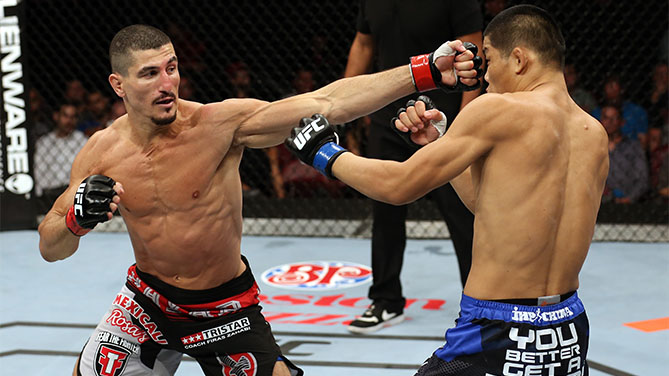 Montreal welterweight Nordine Taleb had to dig deep to turn back Beijing’s Li Jingliang, but he did what he needed to in order to secure a three-round split decision win.

The first round was a punishing one for both men, with Li (9-3) dominating the first half with a high-volume attack that cut Taleb over the left eye and on his nose. Taleb, behind a stiff jab, came back in the second half, cutting Li over the left eye as well, and with the two trading takedowns, it turned into a tough round to score.

The evenly-matched stand-up battle continued in round two, with Taleb (10-2) breaking the deadlock with a takedown in the final two minutes. Li answered right back with three takedowns of his own with less than a minute to go, keeping the judges’ job a tough one entering the final frame.

In the third, Taleb finally found some distance between himself and his foe, with his striking and ground game allowing him to pull ahead in what was an entertaining 15-minute scrap. 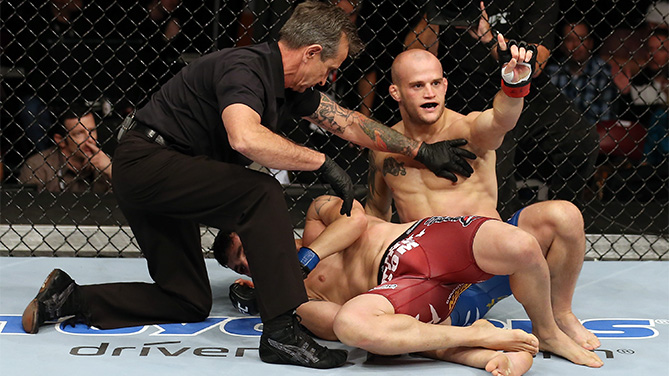 Ontario’s Mitch Gagnon earned his fourth consecutive win in the main card opener, submitting Roman Salazar in the first round of a bout that should move him from bantamweight prospect to contender.

Taking his time to implement his game plan against the late injury replacement from Arizona, Gagnon (12-2) eventually got the fight to the mat and he took Salazar’s back. The newcomer rose to his feet, but Gagnon was able to sink in the rear naked choke that forced Salazar (9-3) to tap out at 2:06 of the opening frame.
> Watch: Mitch Gagnon Backstage Interview
More: Prelim Results | Bonus Report | Event Gallery | Post-Fight Press Conference | Fight Card | UFC FIGHT PASS Prelims