Heinisch Aims To Relive Past during Fight Week

“I try to relive it, because honestly it feels like it never happened, like a dream. So especially around fight week I try to relive it."
By Steve Latrell, on Twitter: @TheUFSteve • Dec. 12, 2019

Ian Heinisch laughs when I ask him what single piece of advice the 31-year-old would give his 21-year-old self if he could magically go back in time.

“I was out of control. Maybe listen to the advice of people who have been through some things. Don’t make all the mistakes yourself.”

If you’ve never read Heinisch’s piece “You Ever Been To Rikers?” in The Players Tribune, it’s certainly worth your time.  It’s a harrowing firsthand account of his journey from being a lauded high school wrestler to being incarcerated in both Europe and the United States for drug trafficking. The details are so frightening that it’s hard not to characterize his current status as a Top 10 middleweight in the UFC as anything less than a miracle.

Heinisch would eventually start taking that advice he wished his younger self would have, and at least some of that advice came from Factory X coach Marc Montoya.

“He took me in like family. He’s a mentor to me. I’ve just learned so much from him. He lives everything out that he speaks. That’s just super important to me.”

The chemistry with Montoya proved instrumental in helping Heinisch corral his off the mat distractions, but also bore fruit with a championship in LFA, and a performance on Dana White’s Contender Series that led to a UFC contract and his ranking among the middleweight elite.

For his part, Montoya wasn’t always convinced that Heinisch was ready to leave the past behind. But he pinpoints the moment that everything changed.

“When Ian lost that first LFA title fight against Markus Perez is when he really had to dig deep,” Montoya explains.

“I always say, fighting doesn’t build character, it reveals it. I really believe that, especially in a loss. So when he lost the LFA belt and the opportunity to go the UFC, it really revealed his character and he got all of his ducks in a row. I saw a kid that was different and hungry, and like, ‘Man, you’re not taking this from me.’ His freedom was taken from him because of choices. So he went out and changed a lot of things, which is not easy to do as a kid in your late twenties. Not easy for any of us. He put the work in, and really started growing on the mat more than I’d ever seen, and he’s had an amazing first part of his career in the UFC. We’re totally in the infancy stages with Ian. He’s still growing.” 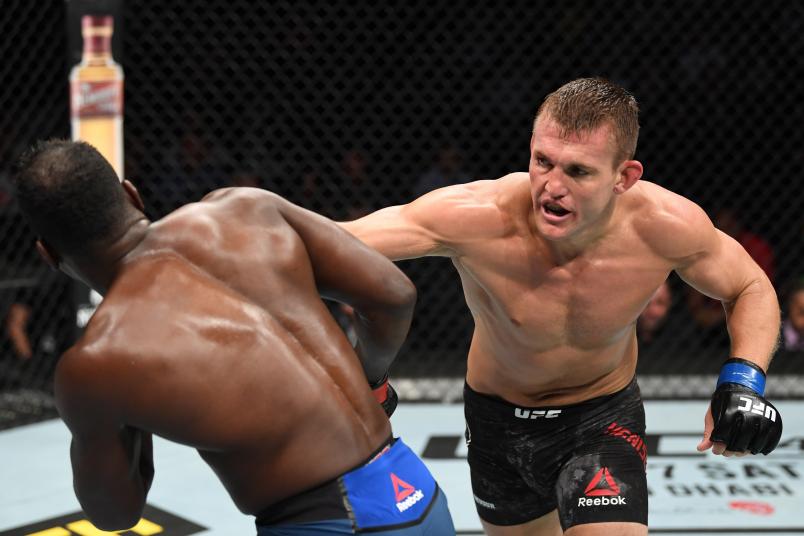 Heinisch agrees that loss, the first of his professional career was a turning point. On and off the mat, things changed.

“I was fighting for the LFA belt to get in the UFC. I lost that, and I bounced back with a five-fight win streak with three knockouts. I plan to double that. Once you take a loss, you’ve got to reevaluate everything you’re doing. I’m no stranger to adversity. I’m very good at bouncing back and not staying in that negativity.”

Nobody welcomes a loss in this sport, but a few minutes talking to either Heinisch or his coach reveals that they view them as an opportunity. Coming off a big one to Derek Brunson at UFC 241, they both believe they’re primed for another turning point.

“He’s shown what he does when he bounces back from failure,” Montoya says. “That’s what I’m looking forward to. I always know when Ian has a rebound, he’s always ten times better than he was. If we see that again, look out in that 185-pound division. He’s coming for that world title.”

Heinisch will get his second crack at the big pay-per-view stage Saturday when he’ll find himself locked in the Octagon with the surging Omari Akhmedov at UFC 245. Yet for all the bright lights and glamour of Las Vegas, Heinisch is keen to keep his troubled past on top of his mind, to remember why he is where he is.

“It’s surreal, for sure. I try to relive it, because honestly it feels like it never happened, like a dream. So especially around fight week I try to relive it. I’m actually going to reconnect with someone I was locked up with and he was with me through the darkest times. We haven’t seen each other in about eight years, and he’s flying out here to watch my fight. I want to reconnect with him and just relive it a little bit, get in that dark place and be like, ‘Look where I’m at now, where he’s at now,’ and pull that out in the fight.”