Hector Urbina and the Hard Road to the UFC 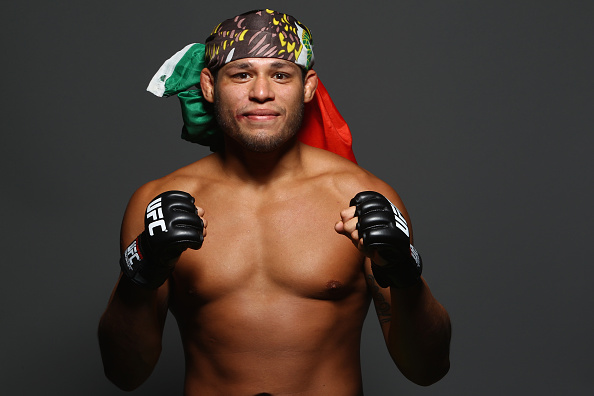 Like many veterans of the sport, Hector Urbina has great stories for days about the struggles of the fighting life and his way up the ranks from raw prospect to UFC fighter. And as we spoke in June of this year, as he prepared for a UFC 188 bout in Mexico City against Albert Tumenov, it seemed like smooth sailing for the Monterrey native who had paid more dues than most on his way to the big show.

“Every opportunity I saw, I was taking it, and luckily, it went my way,” he said of a career that didn’t get its big break until he was brought into The Ultimate Fighter 19 after originally being an alternate. He went on to submit Adrian Miles to get into the house, eventually losing a quarterfinal war with Cathal Pendred. But he was in, and he wasn’t leaving.

“The door opened for me, and I ran right through the door, and I was hoping there was another door I could open up, and run through that one too. And luckily, it’s been happening like that for me.”

At UFC 180 in November of 2014, Urbina made his UFC debut in his home country, submitting Edgar Garcia in the first round. The Tumenov bout was going to be another big one, but an arm injury took him out of the bout. On Saturday, he returns, and this time he’ll do it in his hometown of Monterrey as he battles Poland’s Bartosz Fabinski.

For some, this rollercoaster ride would be enough to make you question your resolve, but the 28-year-old Urbina is made of tougher stock than that, and it’s not surprising, given his upbringing in the fight game.

“I honestly feel like I’ve been through two full careers already,” he said. “I started fighting at 18. I hadn’t even been in a street fight then, and I just jumped right in with the wolves. But I learned a lot and I’m still learning. I’m at a definite advantage because I’ve been through so much in the game already as far as training everywhere and crosstraining everywhere that I feel a little bit older than I am. (Laughs) Then I stop and think, your body hasn’t started peaking yet, you’re still growing. It’s a blessing. I’ve been through so much, I’ve gained so much knowledge, I’ve met so many great people, and it’s just the beginning.”

In the beginning of that “first” career, Urbina wasn’t interested in building his record and making it glossy enough to attract UFC attention. Oh, his goal was fighting in the Octagon, but he was going to take the hardest road possible, which explains fighting current middleweight contender Tim Kennedy in his third pro fight and UFC vet Jason “Mayhem” Miller in his tenth. The Kennedy fight in September of 2006, which he lost by first-round knockout, was particularly harrowing for Urbina.

“Once I did start fighting, I was in it to get in the UFC,” he said. “At the very beginning, I considered myself a UFC hopeful. Taking fights against Tim Kennedy and Mayhem Miller and guys of that caliber, to me was my way of seeing if I could at least go out there and learn anything. Whether I won or lost, I wanted to learn and see where I was at. I took them really early because I wanted to grow off of that. But yeah, I was terrified. (Laughs) Tim Kennedy came out there like GI Joe, he was just huge. And I was like ‘oh my God, this guy actually knows how to fight, and he looks like a fighter.’ I bought my shorts from the internet. I just started training. But to me, it was like ‘learn off this. No matter what, learn from it.’ And later on I ended up training with Tim Kennedy. He’s a really nice guy and he helped me out.”

There was precious little daylight against Miller either, as Urbina dropped to 7-3 when he was halted in the opening round by Mayhem.

“Going up against a real martial artist was overwhelming,” he said. “Yeah, I lost that fight, but looking back, I lost it because I didn’t know what to do in situations, I didn’t know how to engage. But that helped me evolve a lot.”

From there, it was training anywhere and everywhere, wherever Urbina could get some knowledge. Whether it was American Top Team in Florida, Pat Miletich in Iowa, Jackson’s MMA in Albuquerque, and all points in between, Urbina was a sponge, and eventually, things started to click.

“I was really trying to learn,” he said. “I didn’t want to walk into a fight not knowing what to do. And I’ve grown a lot from that.”

The 25-8 record may not show it, but Urbina’s struggles are what made him a UFC fighter. At the same time, he doesn’t hold anything against anyone who can jump into the big show after just a handful of fights. In his eyes, good for them.

“Everybody’s got some kind of struggle in their life, and they’re fighting for something that is worth fighting for,” he said. “I wish everybody the best that’s in the MMA world and trying to become a martial artist. I left Mexico to find the American Dream, and now I’m back and living the dream in Mexico as my job. I think it’s really awesome that it worked out like that.”