The Heavyweights are Coming to Vegas in May

“If you look up at everyone who is sitting at this podium and look at their last five or six fights they have had, there are not many boring fights.” - UFC President Dana White 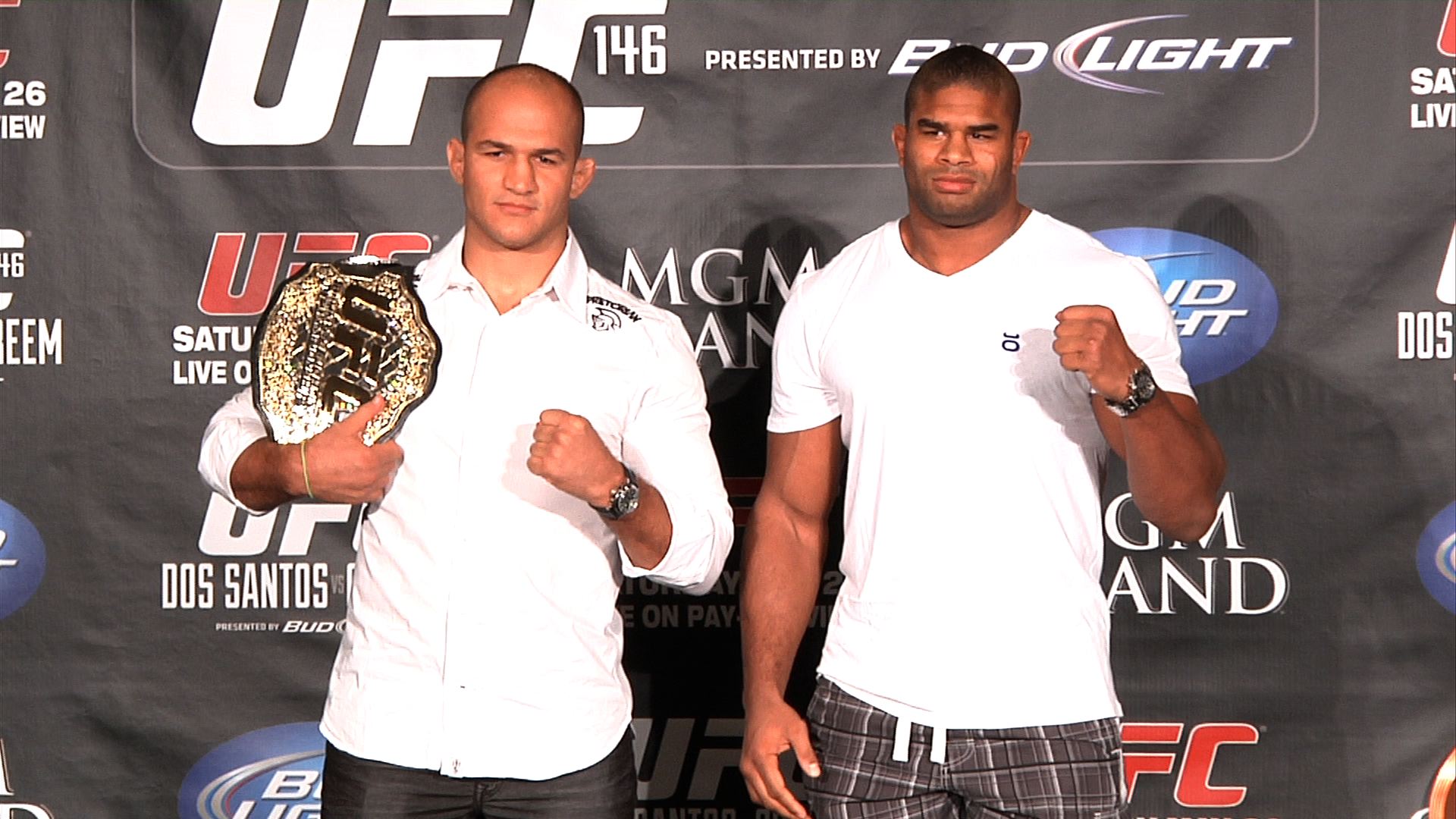 The Octagon might need to be reinforced because the big boys are coming to play.

On May 26th at UFC 146 in Las Vegas, Nevada at the MGM Grand Garden Arena, one weight class will take center stage, with an entire pay-per-view card dedicated to their cagefighting combat: the heavyweights. To save time on the weigh-ins, let’s just agree that these guys on the main slate of Octagon action are big - real big. Besides their gargantuan size, it’s a new era of top competition in the UFC, as these scale-tippers are agile, mobile, versatile, and, most importantly, hostile. Simply put, if you like heavyweights, you’ll love UFC 146.

From top to bottom, it’s a who’s who of colossal knockout artists and, arguably, the best and bulkiest submission specialist in UFC history. To set the tone for these plus-sized fighting festivities, the hard-hitting Antonio “Bigfoot” Silva will make his Octagon debut against fan favorite fist-bombardier Roy “Big Country” Nelson. Next up, a contest between two of the most dynamic fighters in the division who are also former UFC champions: Cain Velasquez vs. Frank Mir. Lastly, in the main event, kickboxing sensation Alistair Overeem takes aim at the title against current heavyweight king Junior “Cigano” dos Santos.

Yesterday, these six titans, plus UFC President Dana White, managed to share one stage to promote this literally enormous event and to answer questions from both press and fans alike. A popular query voiced by many in the media was also the most straightforward, why have an entire card of heavyweights? Easily, the most memorable answer came from the longest tenured UFC fighter on the dais, who noted that fellow fighters in all divisions are certainly talented, but the big guys are scary too.

“When you see a 135 pound fighter fighting, he could be the baddest dude at 135, 145, and 155,” tells Mir. “But I think a lot of people when they are watching the fights, in the back of their mind, they kind of feel, ‘Yeah, but I'm 220. Even though he knows how to fight, I can probably kick his ass.’ We're the heavyweights. If you’re thinking that, you’re stupid.”

A less comical, but just as effective response came from White that these super six are really exciting to watch. “If you look up at everyone who is sitting at this podium and look at their last five or six fights they have had, there are not many boring fights,” says White in a wild understatement, as all of these fighters are revered finishers with punching power and dangerous ground games. “You're probably going to see a knockout. With this heavyweight show, there can be knockouts, there can be submissions. This isn't your typical allure of the heavyweights card - these guys can do anything.”

A perfect example of how well-rounded these gigantic gladiators are is the bout is between two BJJ black belts who knock people out: the 16-3 “Bigfoot” Silva will make his Octagon debut against the 17-7 “Big Country” Nelson. Both highly-regarded fighters are coming off losses in their last outings, but a win over the other would easily put them back in the title hunt. As for Silva’s start in the UFC, White referred to “Bigfoot” as a “man on a mission” to get a shot at the crown, which is highlighted by Silva leaving the Blackzillians gym because Overeem joined, believing that the two are on a “collision course”. For “Big Country”, he has at least a few more marquee matchups of guaranteed entertainment before his improbable drop to light heavyweight.

“We actually finish fights,” states Nelson. “Everybody likes the homerun ball in baseball and everybody likes a good dunk in basketball - we're the guys you just like to see finish.”

The next contest pits two previous owners of the UFC heavyweight belt who have phenomenal, but different, ground skills: Velasquez vs. Mir. On one side of the Octagon, Velasquez is a two-time NCAA Division I All-American wrestler from Arizona State University and, on the other side, Mir is a BJJ black belt who owns the most submission wins in the UFC heavyweight division (eight). Besides contrasting grappling styles, Mir is riding a three fight win streak topped by his kimura submission of Antonio Rodrigo Nogueira at UFC 140, while Velasquez is coming off the first loss of his career at the hands of dos Santos and his one punch knockout power in November at UFC on FOX

“Implement the game plan sooner,” asserts Velasquez about what he learned in his last fight. “I love what I do. In wrestling, you have a loss and it's not the end of the world. You have to come back stronger and be healthy. Learn from your mistakes. Move forward and get better.”

Along with Velasquez and Mir trying to reclaim their spot at the top, Mir would like to defeat a skill set that has plagued him in the past. “Wrestling is something I have had a hard time with stylistically,” admits Mir, who has evolved tremendously in his decade plus fighting inside the Octagon, but a win over a top wrestler like Velasquez would be a personal career high point. “I think wrestling is a huge factor in all fights. Typically, the guy who is the wrestler can decide where the fight goes - whether it is standing or on the ground. I just hope to make it where both of those are not viable choices.”

In the main event, punches and kicks will collide as Overeem looks to add another belt to his display case and dos Santos looks to remain undefeated inside the Octagon. “The Reem” recently debuted in the UFC with a memorable TKO of Brock Lesnar at UFC 141, and, before that, Overeem was a champion in several MMA organizations and is a former K-1 kickboxing champion. At the same time, dos Santos has been battering his Octagon opponents with his fearsome fists, including winning the belt from Velasquez. Also very impressive is the fact that neither knockout artist has recorded a loss since 2007.

At 31 years old and with a combined 60-plus MMA and kickboxing matches, Overeem has almost an incomparable amount of standup experience and credentials, but he’s not taking dos Santos lightly at all.. “I definitely see him as the best ‘boxer’ in MMA and UFC these days,” reveals Overeem, which is high praise, but he should be prepared considering he’s the easy choice to be the best ‘kickboxer’ in the UFC. “This is definitely the biggest fight of my career. This is my biggest challenge. I'm training hard every day and it's going to be a great show.”

Brazilian bomber dos Santos will continue to rely on what recently won him the gold: his fists. “I'm a really confident guy with my hands and I really believe I can knock anyone out,” affirms dos Santos, 27, who won his first and last fight in the UFC by a thunderous single punch. “He has very good standup skills. He's a striker, I'm striker. I think somebody is going to get knocked out.”

On Memorial Day weekend in sunny Las Vegas, the UFC superstars of the “biggest and baddest” division will tangle to set the new pecking order for the second half of 2012. Opening the Pay-Per-View card will be intriguing showdowns between Mark Hunt and Stefan Struve and Gabriel Gonzaga and Shane del Rosario. Then, the TUF 10 winner Nelson will test chins with debuting Strikeforce slugger Silva, and two former UFC heavyweight title holders will meet in Velasquez vs. Mir. Finally, the gold is up for grabs in a possible “fists vs. feet” striker’s duel when current champion dos Santos clashes with challenger Overeem. By sheer poundage alone, no event this year is bigger than UFC 146, and with the UFC heavyweight belt on the line - none may be more important.