The Heat is On: UFC World Tour Hits LA

The UFC World Tour was in LA Tuesday. Read on for a recap or click here to watch the full press conference 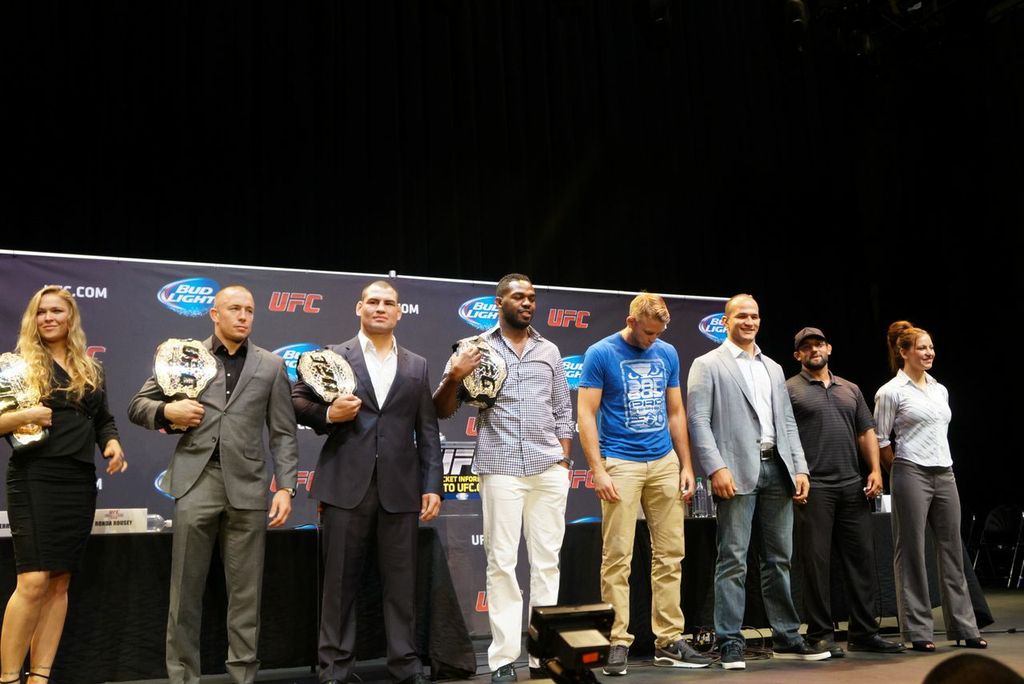 Welcome to the UFC World Tour.

What began in earnest as a week-long press conference blitz will assuredly end with frenzied fisticuffs inside the Octagon for each of the dynamic duos that will delight fight fans everywhere. As a star-studded precursor to this Saturday’s UFC 163 featherweight title bout between champion Jose Aldo and challenger “The Korean Zombie” Chan Sung Jung, the UFC is taking eight of its upcoming pay-per-view headliners (who will be battling for four of the company’s most illustrious belts) to promote their respective events, answer all inquiries, and have incredible staredowns.

"This is the baddest close of a year that we've ever had,” stated UFC President Dana White. “The fights that we have lined up for the rest of this year are insane."

With mental health to the wayside, roughly 1,500 pounds of the UFC’s most elite talent fielded questions from the always inquisitive MMA media and from fans at Club Nokia in Los Angeles, California Tuesday afternoon. Center stage behind the podium, a happy UFC President stood with all high-profile pugilists healthy and accounted for. To his right, four gold belts and their content current owners; to his left, the four motivated mugs of fighters desperately waiting to hear UFC ring announcer Bruce Buffer declare “and NEW...” to a shocked arena.

Up first, on September 21st in Toronto, Canada at UFC 165, the spearhead of Swedish MMA will stand toe-to-toe and, most importantly, eyeball-to-eyeball with the #1 ranked pound-for-pound fighter in the UFC as Alexander Gustafsson takes on Jon Jones. in what could be a possible record sixth successful defense of the UFC light heavyweight crown, “Bones” is easily one of the most physically remarkable athletes to grace the Octagon with his 6’4” frame and 84.5” reach and one of the most dominant with 18 wins and a sole controversial disqualification loss. As the 26-year-old champ prepares for the similarly sized and aged Gustafsson, Jones is anticipating an opponent with an insatiable desire to derail his own career, which is driving “Bones” like never before.

“Alexander, he's a great fighter,” reveals Jones. “He really is. I'm excited for the challenge. The thing that excites me the most is that he is young and I'm sure he has an ambition to win this fight that I maybe haven't seen in a few opponents. A lot of guys I have fought are older, a lot of guys I have been fighting have had the life and been there and done that already. Alexander doesn't have that, but he wants it. Knowing that, I have to train my butt off to destroy any thoughts he has at destroying my life. I'm excited for the fight, it's going to be a good one. I have a young lion on my hands.”

Riding a six fight win streak, including an outclassing of former UFC light heavyweight champion Mauricio Rua in December, “The Mauler” will look to use his slick boxing and foot movement to carve up the champ like none have done before. “I'm doing my homework right here - I'll be ready,” says Gustafsson about getting past Jones’ reach. What he lacks in loquaciousness, the Swede makes up for in intensity as the two shared a particularly fierce staredown following the press conference. “It’s all about working hard every day. Working the hardest. We're working hard at the camp.”

“I have to do everything different than the last fight,” tells Dos Santos, who suffered his first loss inside the Octagon in December’s one-sided unanimous decision defeat to Velasquez. The 29-year-old Brazilian bomber earned a rematch with Velasquez following his Fight of the Night performance against Mark Hunt at UFC 160, which ended with “Cigano” knocking Hunt out with a spinning heel kick and punches. “It's going to be hard, and hard work will be the secret for this. I'll be ready to beat him again.”

Likewise, Velasquez’s first and only loss in the UFC was the 64 second KO by Dos Santos at the inaugural UFC on FOX in November 2011. “The thing that most motivated me from that loss was that something was missing in my life and that was the belt,” asserts Velasquez, who since has bested Antonio “Bigfoot” Silva twice by TKO inside the first round and dominated Dos Santos for five rounds to get the strap back. As for Dos Santos’ post-fight claims that he hits like a girl, Velasquez, unfazed, responded, “He's going to get hit like a girl again.”

This November, the sport’s most prominent champion will tangle with, arguably, his toughest test to date as UFC welterweight champion Georges “Rush” St-Pierre fights Johny “Bigg Rigg” Hendricks. At UFC 167, the 32-year-old MMA superstar from Montreal will look to continue his six year unbeaten streak, which “Rush” has worn the weight class’ gold for the majority of. With an overall record of 24-2, including two successful title defenses post a torn ACL in 2011, St-Pierre’s unshakable resolve, coupled with his seemingly unparalleled athleticism, has made him the longest tenured current champion in the UFC, one who cleared out the division of his generation’s challengers and is taking aim at the next one with Hendricks.

The challenger is the wildly accomplished two-time NCAA Division I National Champion wrestler from Oklahoma State University who has quickly become the owner of the most feared left hand at 170 pounds. “I know that all I have to do is touch him, so my left hand is going to do that,” confidently comments Hendricks, who is on a six fight win streak, including three Knockout of the Nights and, most recently, a Fight of the Night over former interim UFC welterweight champion Carlos Condit in March. “I know he's good at the jab. I'll bite down on my mouthpiece; I'll eat a jab for a left hand any day. I believe I have what it takes, and I can beat Georges St-Pierre.”

Lastly and, by far, the most heated matchup, it was the forthcoming coaches of The Ultimate Fighter season 18 and co-headliners of December 28th’s UFC 168 women’s bantamweight title fight, Miesha Tate and champ Ronda Rousey. Farthest apart on the dais but linked closest by an unfettered animosity, the hotly anticipated rematch of their 2012 Strikeforce struggle will be hyped on the newest TUF, which will feature both men and women at 135 pounds. For Washington native Tate, her experience of coaching was rewarding, but the “ultimate” prize is what is around Rousey’s waist.

“Obviously, Ronda Rousey and I are not the best of friends and dealing with each other every day was challenging in and of itself,” states Tate. “Everybody has holes in their game. I'm going to break her down with my coaching staff and put a solid game plan together. Do some of the good things I did in my last fight and get rid of the bad things that cost me the fight. I'm always looking to evolve, always looking to learn.”

Fortune has definitely favored the bold undefeated “Rowdy,” who owns a bronze Olympic medal and the gold UFC women’s bantamweight belt. “I have everything she wants in life,” remarks Rousey, who, at 26 years old is the face and spirit of the women’s MMA movement, which has gained traction with each and every one of her armbar victories. While she has become a household name in two years plus while also getting a movie role in “The Expendables 3,” Rousey’s conviction as a champion to keep her title is as fearsome as ever. “[Tate] mostly doesn't look me in the eye or talk to me most of the time, which I like to relate to Mike Tyson's speech about seeing the chink in the armor when your opponent won't look you in the eye.”

Four months, four pay-per-views, and four championships that will be defended against four determined challengers. The UFC is putting the world on notice that it’s just getting started in 2013.