Head Hoping to End 2012 Undefeated and with a Finishing Flourish

"I don’t want to be a fighter that’s grinding out wins for 15 minutes.
They don’t pay you overtime when you’re in that cage, so I don’t plan on
putting in all 15 minutes if I can avoid it." - James Head 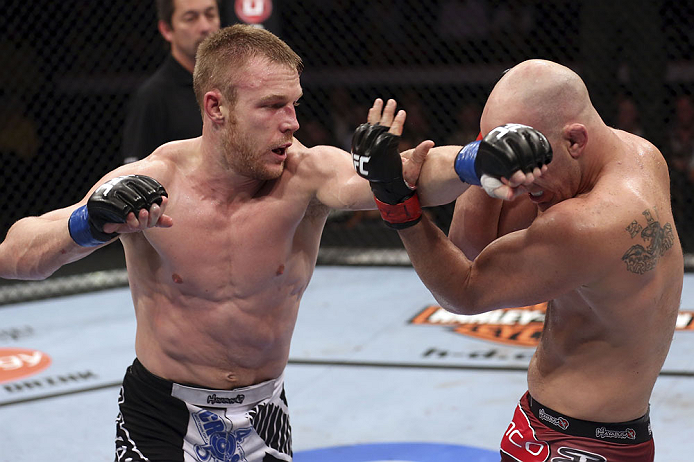 The good news for James Head after three straight out of the country bouts in Vancouver (BC), Stockholm, and Calgary is that this Friday he will return to US soil for a fight on the Ultimate Fighter 16 Finale card in Las Vegas. The bad news? He’ll still be seen as the guy with the black hat when he takes on Vegas’ Mike Pyle.

But as far as Oklahoma City’s Head is concerned, that’s not an issue in the slightest.

“I’ve always found myself fighting in guys’ backyards, and Mike Pyle trains and lives in Vegas, so it’s kinda in his backyard,” said Head. “But you just really shut out the crowd. The crowd doesn’t matter, and it really never has. You obviously want to put on a good show and excite the fans and all that, but as far as hostile territory, in Sweden (against Papy Abedi) it really fired me up. When he walked down to the ring and had his cigar in his mouth and flag draped over his back and everybody was cheering, I couldn’t wait to shut everybody up. And that’s the chip on the shoulder that you develop fighting in somebody’s backyard.”

Against Abedi in April, Head secured his first UFC win impressively, submitting the Sweden resident in the first round. It was a bout that doubled as Head’s welterweight debut, and it was an emotional victory to say the least as he improved to 8-2 as a pro.

So when Head got the call for a July bout against Claude Patrick that turned into a matchup with Brian Ebersole after Patrick got injured, you had to wonder two things about the 170-pound up and comer: how would he be able to get up emotionally again after the biggest win of his career against Abedi, and more importantly, did he have the experience to deal with the unorthodox and crafty Ebersole, who brought an 11 fight winning streak into the Octagon with him that night?

As for part one of that two-part query, Head says, “The pressure I put on myself to just perform to my ability, that’s the main thing for me. To get in there and test myself to the limit, that’s what really drives me in the sport. When you walk down to the Octagon, if you need help getting fired up, there’s something wrong with you. It’s not like anything you’ve ever experienced in your life before.”

And when it comes to part two, well, the split decision victory for Head that snapped Ebersole’s lengthy hot streak should cover that end of things. That’s not to say it was easy, and Head admits that battling Ebersole was unlike anything he had previously dealt with in his six year pro MMA career.

“He’s such a hard guy to not only fight against, but to look good against, just because of how awkward he is,” said Head. “There’s really nobody’s style that can emulate him, and he wasn’t my original opponent, so we were training for somebody that wasn’t near as awkward a fighter. And the way that he approached the fight with takedown attempt after takedown attempt, I made a couple mistakes. The first choke I went for, I thought it was pretty deep, but it was unbelievable how he got out. Then a couple other times later in the fight I went for some things that I probably shouldn’t have just because I let the crowd sway me, other than fighting technically, staying on top, letting him up. But I think it was a really good fight for me to kinda work and be disciplined. I never really had an opponent come at me the way that he did, so it was a good win and a good learning experience for sure.”

You could even say that it was a relief for Head to get that one out of the way and move to 2-1 in the UFC, knowing that pretty much any opponent from here on out will provide him with a more traditional look stylistically.

“It’s definitely a different emotional feeling; it’s almost like a relief,” said the 28-year-old. “The fight was so awkward and so weird, it wasn’t like a finish. When the fight was over, I thought I won, but when they went to the scorecards and it was a split decision, it leaves a little doubt in your mind. You’ve got to go back and watch the film and see what the one judge thought. So it really fuels me to go out and finish. I don’t want to be a fighter that’s grinding out wins for 15 minutes. They don’t pay you overtime when you’re in that cage, so I don’t plan on putting in all 15 minutes if I can avoid it.”

In Pyle, Head will be meeting a more conventional MMA fighter, but not one that is any less dangerous than Ebersole. In fact, with Pyle scoring stirring knockouts over Ricardo Funch and Josh Neer in his last two bouts, it’s clear that opponents have more than just submissions to worry about with the aptly-nicknamed “Quicksand.” Head was in the arena with teammate Matt Grice on the night Pyle shocked Neer via first round knockout, and you can count him impressed.

“He (Pyle) fought real technical in the beginning, and when Neer was putting that pressure on, he caught him with that overhand right and I couldn’t believe he knocked him out,” said Head. “Before the fight if you had asked me how is this fight gonna end, it wasn’t that way. But it definitely shows you the kind of power he has and that anything can happen in MMA. I’ve known that since the beginning of the sport, so that was just a reminder to keep your hands up and your chin down.”

Will Pyle keep it standing this Saturday night against a fighter with a boxing base like Head? The Oklahoman sure hopes so, but he isn’t holding his breath.

“I think that this fight’s gonna be a lot like my other fights that when I start touching him, he’s gonna want to get the fight to the ground,” said Head. “I don’t see him standing up and making this a boxing match. None of my fights have ever gone that way, but I hope he does.”

That would be an offer Head couldn’t refuse, right?

“You’re not gonna see me shoot for a double leg, I promise you that,” he laughs, and he’s got plenty of reason to be in good spirits heading into the bout. He’s fighting close enough to home so that family and friends will be out in force to cheer him on, he’s one win away from going 3-0 in the UFC for 2012, and after spending a Thanksgiving with “dry turkey and sprints,” he has a bright 2013 on the horizon. So what does next year hold?

“My mom’s gonna make me a pumpkin pie for Christmas, and I’ll deal with 2013 when it rolls around.”