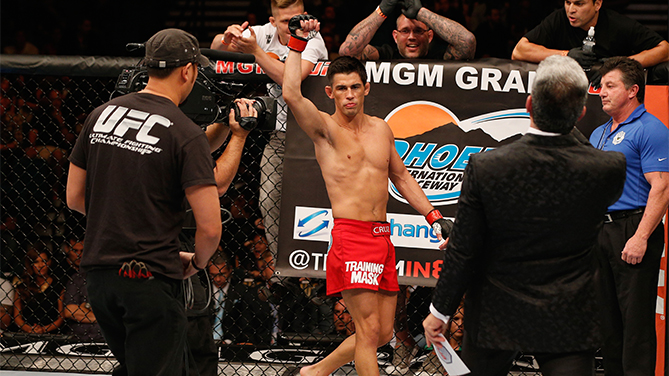 LAS VEGAS, September 27 – It was like Dominick Cruz never left. After a three-year absence due to injury, the former bantamweight champion who never lost his title in the Octagon returned to active duty Saturday at the MGM Grand Garden Arena, and he simply looked spectacular, knocking out number five-ranked contender Takeya Mizugaki in 61 seconds, capping off a dream comeback.

“I always knew I was going to be back, but man, it was tough,” the 29-year-old Cruz said of his time off due to two knee injuries and a torn groin. But once he ran into the Octagon for tonight’s bout, that time away was forgotten in his mind and his performance.

After showing off his trademark footwork and head movement to start the fight, Cruz exploded into a takedown that stunned Mizugaki. It went downhill from there, as Cruz followed up with ground strikes on the steel-chinned Kanagawa product. But the volume of punches accumulated, and after a big right hand stunned Mizugaki and sent him falling forward, referee Chris Tognoni halted the bout at the 1:01 mark. 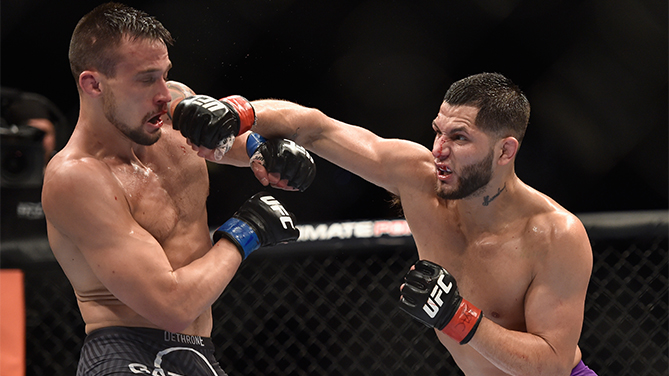 Both fighters delivered high-quality stuff while standing in the first round, Krause (21-6) working behind a stiff jab and Masvidal doing his best work at close range with combinations when he was able to corner his lanky foe against the fence. It was Miami’s “Gamebred” that edged things out though.

Masvidal continued to set the stand-up pace high in the second, even getting the fight to the mat in the final minute. Krause fought well on the ground and got back to his feet, only to get knocked down on a balance shot in the closing seconds.

The third was all Masvidal once again. That’s not to say Krause wasn’t competitive, but Masvidal was always a step ahead throughout, putting a cap on an impressive win. 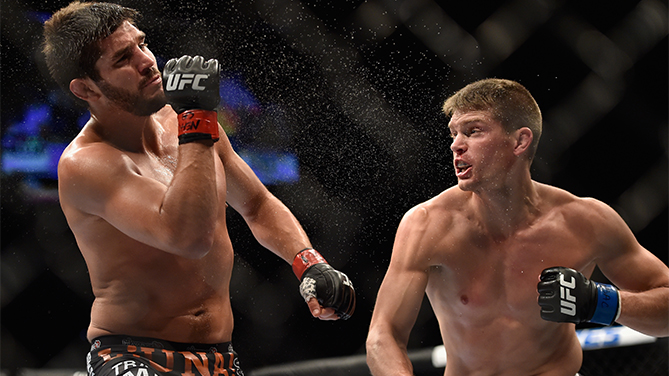 It wasn’t the stand-up war many expected, but welterweight prospect Stephen Thompson did enough to beat Patrick Cote and pick up the three-round unanimous decision victory.

The first round was fairly uneventful, Thompson possibly edging it out thanks to a busier striking attack, but a case could be made for Cote’s control against the fence. The action picked up in the second, but again, it was a tough one to score, with Thompson leading the action but Cote making sure that every time he got hit, he would get one back. A late surge by “Wonderboy” did help the South Carolina native’s cause though, and with 90 seconds left in the third, he was finally able to hurt the Canadian veteran, dropping him with a hard right hand. Cote weathered the follow-up attack but never seemed to recover, sealing the fight for Thompson. 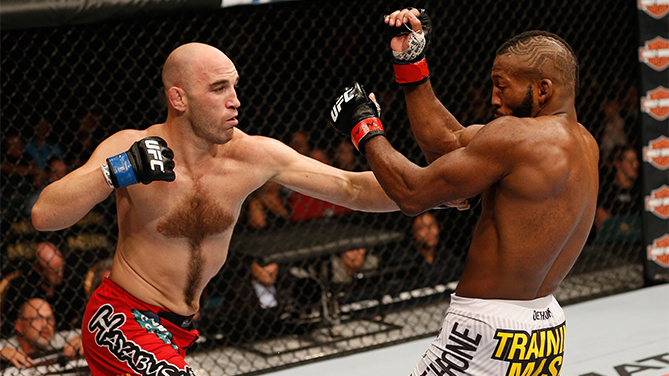 Back in the Octagon for the first time since November of 2013, welterweight veteran Brian Ebersole scored a three-round split decision win over John Howard, snapping a two-fight losing streak in the process.

After an early stalemate to start the bout, Ebersole used an exchange of kicks to score a takedown on Howard midway through the round, and he was eventually able to take his opponent’s back. Howard’s defense kept him out of trouble, with an upkick to the head of the downed Bostonian drawing Ebersole a stern warning from referee Chris Tognoni just before the horn.

Howard came out fast in the second, forcing Ebersole’s leg to wobble after a kick in the opening stages of the round, and a minute later he scored with his first takedown of the fight. With two minutes left, Howard took Ebersole’s back and nearly pulled off a neck crank, and even though Ebersole escaped in the final minute, “Doomsday” kept him grounded.

Keeping his jabs and crosses on target, Ebersole scored well in the pocket on Howard in the final round, allowing him to start to pull away in the pivotal frame. Howard got in his share of shots, but it was the busier Ebersole who was simply doing more, and the final tallies reflected that. 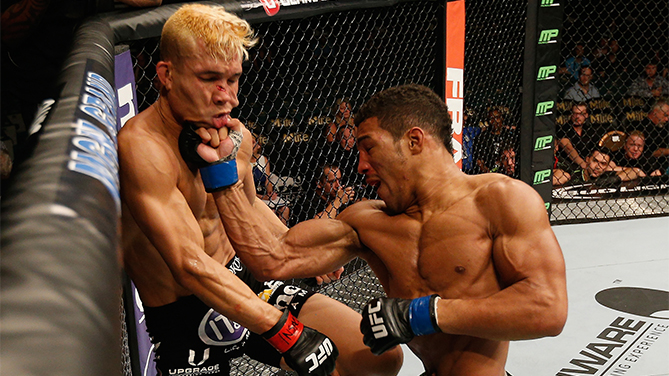 In a meeting of lightweight prospects, Kevin Lee was steady from start to finish in winning a three round unanimous decision over Jon Tuck.

Lee (9-1) was sharp in all aspects of the game in round one, firing off knees and kicks, suplexing Tuck to the mat, and controlling matters in the clinch along the fence. Tuck did get a brief moment of daylight when he nearly caught Lee in an armbar with two minutes left, but other than that, it was all Lee in the opening stanza, with only an inadvertent low kick slowing his momentum.

In round two, Tuck (8-2) landed low twice with his kicks, earning a point deduction from referee Jason Herzog and putting him deeper in the hole when it came to the scoring. He nearly caught Lee with submissions from his back in the second half of the round, but it wasn’t enough to swing momentum in his direction.

Lee kept the pressure on in the third, knocking Tuck’s mouthpiece out and then taking him to the mat, and the Guam native, now bleeding from a cut on his nose, had no answers for the “Motown Phenom,” who locked up his second consecutive UFC win. 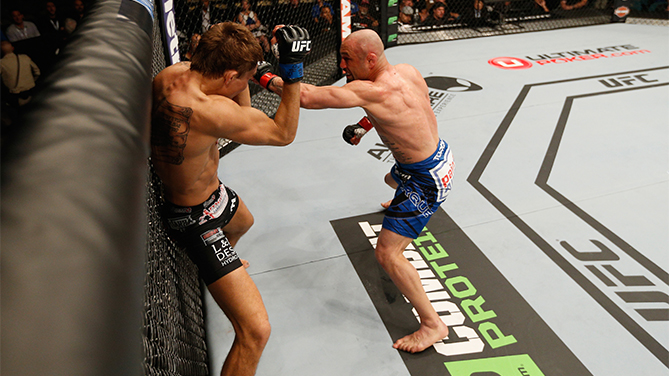 Things weren’t looking too good for former featherweight and lightweight standout Manvel Gamburyan in his 135-pound debut, but after losing much of the first two rounds to Cody Gibson, the veteran bounced back with a late second-round submission win in the UFC 178 opener.

Eschewing his grappling game for much of the first round, Gamburyan was on the receiving end of Gibson’s strikes, and with a little over a minute to go, he got rocked by a flush right hand. At that moment, “The Anvil” remembered what got him here in the first place and he took the Visalia prospect to the mat, allowing him to clear his head, pick up some points, and get out of the round.

Gamburyan kept firing haymakers in the second, and Gibson responded with shots of his own, but it was an inadvertent low kick that did the most damage to the former Ultimate Fighter finalist, forcing a momentary stop to the action. As soon as the bout resumed, a right hand by Gibson sent him to the deck, but again, Gamburyan was able to survive. And not just that, but with less than a minute to go, Gamburyan got the fight to the deck and sunk in a guillotine choke. Gibson tried to hold on, but with just seconds to go, at the 4:56 mark he was forced to tap.