He Is The Bad Guy. Jon Jones is OK With That 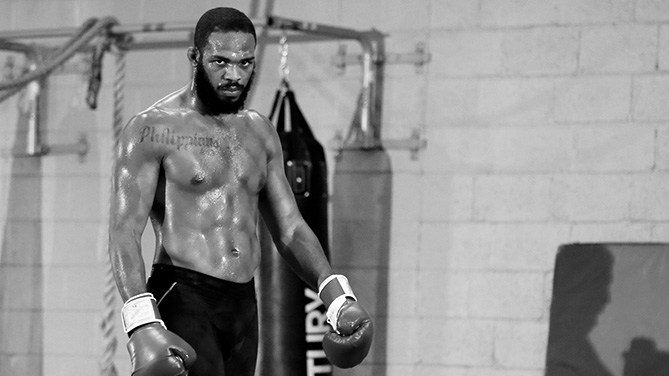 ALBUQUERQUE
Jon Jones is accustomed to answering the UFC’s bell with reckless abandon. And with a real sense of timing.
The man known as “Bones” for his rangy frame took his first UFC fight in 2008 on two weeks’ notice. Four seconds into his title shot in 2011, Jones used an acrobatic flying knee to make a dramatic statement: The UFC light heavyweight belt owned by Mauricio "Shogun" Rua rightfully belonged to him.
Jones has held onto the title ever since, wiggling out of a Vitor Belfort arm bar, absorbing a massive strike by Lyoto Machida and conquering Alexander Gustafsson in a five-round war for the ages.
The UFC’s top pound-for-pound fighter has won via stoppages a staggering 75 percent of the time during his MMA career, the sort of track record that defies his own humble assessment of his sporting prowess. 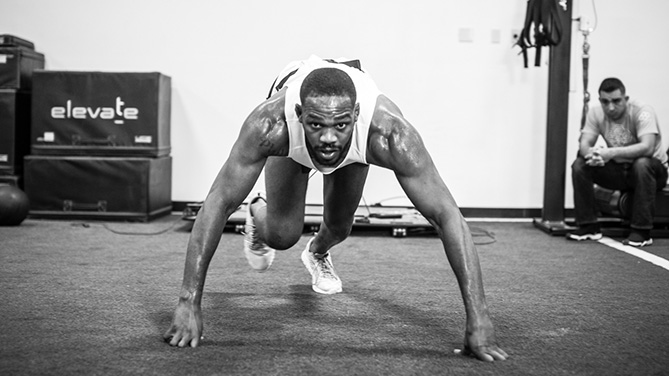 “I’m not very athletic,” Jones told UFC.com during a break from training at the Team Jackson-Winkeljohn gym in Albuquerque, N.M. “It’s something my brothers don’t talk about now. They all know it. They used to joke, ‘Don’t pick Jon in a pickup basketball game.’ It’s fine. I’ll just watch and be cheerleader.”
Jones, 27, gravitated toward wrestling --- and, eventually, MMA --- as his brothers charted courses for the NFL as defensive ends. (Arthur plays for the Indianapolis Colts and Chandler is a member of the New England Patriots.) This was purely intentional.
-----
“There is a general dislike I have for him, but at the same time, you don’t have to like everyone you work with.” — Jon Jones, on his attitude toward Daniel Cormier
-----

Jack “J.J” Stanbro, Jones’ wrestling coach at Union-Endicott (N.Y.) High, hoped to keep the wrestling focus from straying, and told his pupil there was no other athletic path available.
“He said, ‘You’re not going to be a football player, Jon. If you want a free education, wrestling will be your way in.’ I took that to heart and stuck with it,’” Jones recalled.

Jones remains proud of his wrestling accomplishments before his pursuit toward MMA stardom began at age 19. He won a New York state wrestling title as a senior at Union-Endicott High and the National Junior College Athletic Association championship at Iowa Central Community College.
Granted, when you go up against former Olympic wrestler Daniel Cormier --- the main event Saturday at UFC 182 at the MGM Grand Garden Arena --- it’s understandable that Jones’ wrestling beginnings may get overlooked.
He is determined to overcome that.
“I want to show off my capabilities on the mat,” said Jones, who has regularly gone after the strengths of his opponents over his seven successful title defenses, including April’s defeat of Glover Teixeira at UFC 172. “From the time I was a kid, wrestling meant everything to me. I changed my focus to mixed martial arts and my career showed what kind of focus I have. It doesn’t mean my love of wrestling has gone away.”
Jones paused before he assessed how he’s viewed among wrestling loyalists ahead of one of the most-anticipated fights in UFC history.

“I almost feel the whole wrestling community is backing Cormier,” Jones said. “It’s as if I’m not a guy who has come from that community. I’ve been to the Fargo (National Wrestling Championships) and so many other national tournaments. I really feel like I should still be associated with being a wrestler. One guy in eight years (Gustafsson) has been able to take me to the ground. His (Cormier’s) accolades shouldn’t overshadow the fact that my heart is still on the mat.”
Stanbro, Jones’ high school coach, told UFC.com that Jones could have accomplished just as much on the mat as Cormier, an All-America at Oklahoma State and a member of the 2004 and 2008 U.S. Olympic teams.
“I think he could have gone to the Olympics,” Stanbro said of Jones. “He won a national junior college championship as a freshman. That’s impressive. He could’ve gone to a Division I program and been one of the best wrestlers in the nation.”
This path has worked out pretty well for Jones (20-1).  A victory over Cormier (15-0) would propel Jones to a UFC-record eight title defenses --- and he’d get the better over on a bitter nemesis in the process.
“There is a general dislike I have for him,” Jones said, in the understatement of the year, “but at the same time, you don’t have to like everyone you work with.”

Jones took that rancor to the next level when he pressed his forehead against Cormier’s, setting off a now-infamous brawl at a UFC 178 news conference in August. The two were slated to be atop the event card before the bout was delayed after Jones sustained a leg injury in training.
The viral video aftermath is playing everywhere this week: Cormier pushing Jones’ throat and a scuffle ensuing as the two --- despite the efforts of UFC officials and others --- take out the backdrop as they tumble off the stage.
“If that whole situation happened again, I probably wouldn’t have put my forehead on his,” Jones said. “Would I have attacked him if he put his hands on my throat? I would have done it again. I think a lot of people found it distasteful, but at the same time I think there will be a sold-out arena. It had its pros and cons.”
-----
Jones: “So, you’re Cain’s wrestling coach? I’m Jon Jones and I heard you’re pretty good at wrestling.”
Cormier: “Yeah, I was an Olympic wrestler.”
Jones: “I bet I can take you down any day, man."
Cormier: “Do you even know who I am?"
— Jon Jones’ recollection of his first conversation with Daniel Cormier
-----
One main drawback: The punishments handed down to each fighter by the Nevada State Athletic Commission in September. Jones was fined $50,000 and ordered to complete 40 hours of community service; Cormier received a $9,000 fine and 20 hours of community service.
Jones also lost his endorsement deal with Nike as a result of the brawl.
“It wasn’t a moment I’m necessarily proud of, but it happened,” Jones said. “It’s going to be part of our storyline forever.”
Beyond the brawl, Jones also threatened to "absolutely kill" Cormier in an off-air exchange before an ESPN interview. And the roles were seemingly set.
“It’s easy to paint me as the instigator,” Jones said.  “I think a lot of people want to me to be the bad guy. It does seem like the media has painted me to be the bad guy. I’m OK with that. I’m comfortable with that. I’ll play the bad guy.”
WATCH: Countdown to UFC 182: Jones vs. Cormier | UFC 182 Extended Preview | UFC 182 Hyped Up Promo
So, from where does this hatred stem? 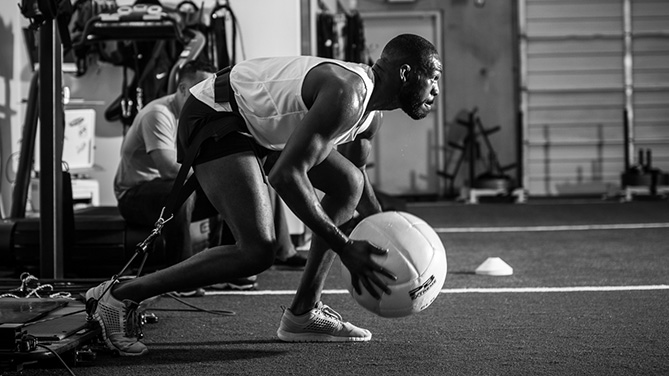 Jones’ Team Jackson-Winkeljohn teammates introduced Jones to Cormier at UFC 121 in October 2010. The main event at Honda Center in Anaheim, Calif., featured Brock Lesnar vs. Cain Velasquez, whose wrestling coach at American Kickboxing Academy in San Jose was Cormier.
Here’s how that initial conversation went, according to Jones.
“’So, you’re Cain’s wrestling coach? I’m Jon Jones and I heard you’re pretty good at wrestling,” Jones recalled saying.
“Yeah, I was an Olympic wrestler,” Cormier replied.
“I bet I can take you down any day, man,” Jones said.
“Do you even know who I am?” Cormier responded.
Jones said he was just fooling around, but contends that Cormier and those close to him “took it way more serious than I ever intended.
“He just hated me from then on,” Jones said. “We’ve kind of been enemies every since.”
The three-plus month delay from the original fight date of Sept. 27 hasn’t quieted the chirps from either side.
While there have been no further death threats, the two have traded barbs on Twitter. Jones began it on Dec. 15, listing part of his resume --- adding Cormier to the slate of fighters he’s beaten.

“I was looking at my career and everything I’ve accomplished,” Jones said. “Everybody on my championship resume are high-level fighters with really big names. Daniel Cormier is a really big name. It was kind of a mental thing for myself.”
Cormier responded a day later:

Yes, this fight has become personal. Still, one of Jones’ trainers, Greg Jackson, isn’t concerned about Jones keeping his focus like he did in another contentious opponent: former Team Jackson-Winkeljohn teammate Rashad Evans at UFC 145 in April 2012.
“He did really well with Rashad,” Jackson said. “He kind of thrives on that. It gets his fire going. That one was actually worse because it was so personal. Really personal. This one, they just don’t like each other.”
Mike Winkeljohn said Jones is a rare fighter who doesn’t allow the pre-fight hype and trash talk to carry over to the Octagon.
“I think it’s legit,” Winkeljohn said. “There is a beef between Jon and Cormier. With that said, Jon knows how not to let that take over and make him do something stupid in the cage. A lot of guys do the opposite. They get so pissed off at somebody they start trying to man up to the guy to prove they’re tougher. It becomes a slugfest.” 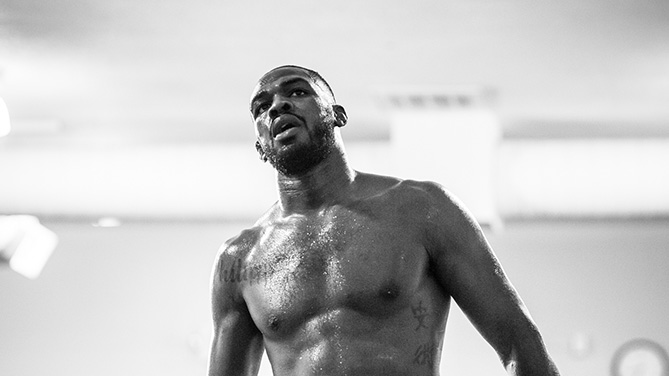 Jones tore the meniscus in his left knee and sprained his ankle in two different spots on the same leg in August. (The knee injury required surgery.) Jones said he’s fully recovered, although there were some concerned looks on the faces of those around the Team Jackson-Winkeljohn gym when he let out a grunt and walked gingerly for a few seconds on one of his legs as members of the news media gathered on Dec. 16.
“I’m fine,” Jones told those outside the cage.
He continued sparring a few moments later and all appeared well.
When he finished, Jones donned a red Reebok shirt and grabbed a pair of white Reebok shoes – an apparel choice coinciding with the brand announcing it had signed Jones and UFC women’s bantamweight champ Ronda Rousey to a sponsorship deal.
“I’ve always worried about outside pressure affecting him, whether that be business or something like that causing a problem with his training,” Winkeljohn said. “He said, ‘Coach, I can separate the two.’”
-----
"I think it’s legit. There is a beef between Jon and Cormier." — Jones’ coach Mike Winkeljohn
-----
Jones has certainly shown the ability to do that. Buying into his assertion that arguably the best fighter in UFC isn’t particularly athletic isn’t as easy to reconcile.
“He just wasn’t good at stick-and-ball sports,” Stanbro said. “He could run and tackle and do the things he did well as a wrestler. But he didn’t know what to do with a ball.” 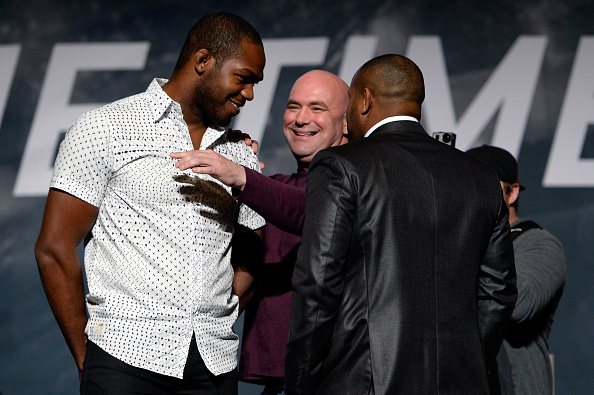 Like his NFL-playing brothers, Jones started at defensive end his senior year in high school.  Barely.
“Bouncing a ball, catching a ball or throwing a ball was never my focus,” Jones said. “My brothers still respect my work ethic. They know what I’m capable of in this field.”
Saturday night, Jones is counting on Cormier becoming the latest fighter to understand exactly what he’s talking about.
Photos By. Wilson Fox