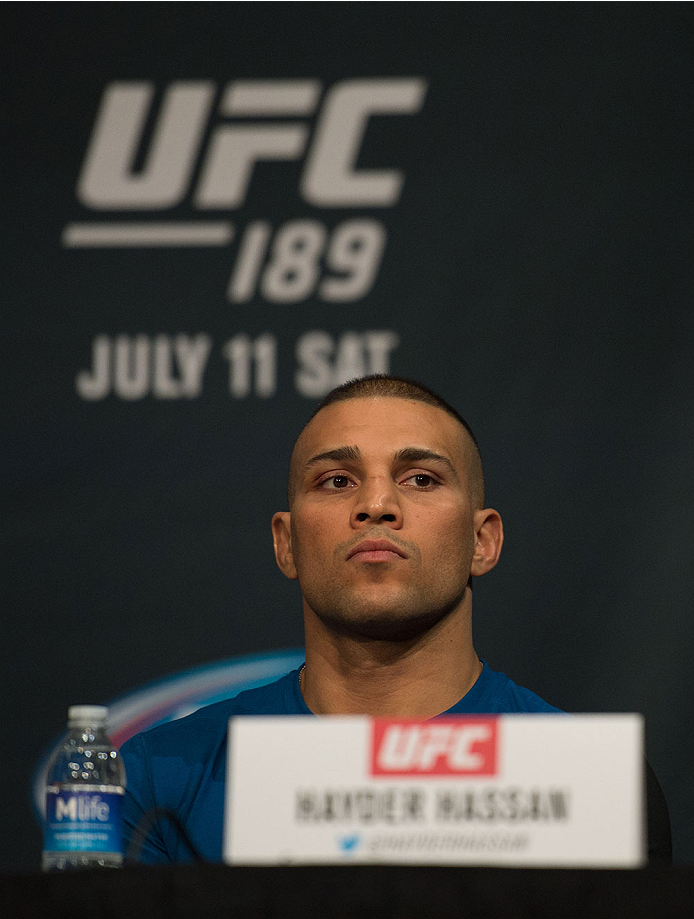 Hayder Hassan has a unique view of the world, particularly the part of it that encompasses his career as a mixed martial artist. As the son of a father who is a physician and a mother who is a psychotherapist, prizefighting wasn’t something that thrilled his parents, but he followed his heart anyway.

Little did he know that his heart was the strongest part of his body, the one organ that took him through three fights in 17 days on season 21 of The Ultimate Fighter. It was a grueling, bruising and punishing run, but looking back on it now, he says it was the best experience of his life.

See what I mean about unique?

“It was difficult,” he laughs, “but also the best experience of my life. I wouldn’t have done it any other way. I fought more times than anyone on the show – three times in 17 days. Every time I fought, it was a must win situation for ATT (American Top Team), so I learned a lot about myself – mentally, physically, spiritually. I fought injured, I fought not being able to train, and I learned what I’m capable of.”

What he’s capable of is coming up big when he needed to, as he first kept American Top Team alive in the competition with wins over Andrews Nakahara and Felipe Portela, and then gave them the season win over their rival Blackzilians with a split decision over Vicente Luque that pushed him to the limit.

“The atmosphere was crazy,” he said of the Luque fight. “The second fight, I went in there with a dislocated rib and I wasn’t able to train for nine days going into the Portela fight. After that, I got my rib reset and I still wasn’t able to throw any punches until the day before weigh-ins going into the Vicente fight. All I was doing was some cardio just to keep my conditioning up. So for me, it was keeping mentally focused, keeping my weight down and being ready for a fight. I’m a very vocal fighter, a very emotional fighter. I enjoy talking and saying something and doing it. When I say something out loud, it’s another form of confidence that I instill in myself.”

Luque was just as motivated as Hassan was though, and the intense three-rounder proved it. It also proved that Hassan knows how to find a way to win.

“40 seconds into the first round, I was gassed,” he admits. “My body was like ‘dude, what the hell did you do to me?’ (Laughs) Everything I wanted to do, I couldn’t do. I’m a high volume puncher, and all I had were two punches – I had a left-right. If I wanted to throw a hook, I had to throw just a left hook. I didn’t have a 1-2-3. Those were the adjustments I had to make during the fight and that’s why the fight ended up being a war. I also think that’s what made it so special – it was one of those ‘how bad do you want it’ moments.”

When it was over, Hassan and ATT had the win, but there were more winners, as Hassan told team owner Dan Lambert before the fight that he wanted to add his share of any money he earned from TUF to the Wounded Warrior Project that Lambert was donating his team’s winning prize of $10,000 from the show’s relay race to. Lambert told this to the coaches and fighters also sharing in the winnings, and they followed suit. It was a selfless act all around, but particularly for Hassan, who, as a young man of Iraqi descent, knows all too well about the casualties of war.

His uncle was executed by the Republican Guard in the country because he was viewed as a threat, and even his father was forced to work in a prison camp. Hassan, born in the United States, avoided experiencing things like this himself, but they still hit home, making him appreciate what he has, while admiring those that came before him. They showed him by example that hard work makes anything possible.

“It’s definitely something in the blood,” Hassan said. “We have a lot of pride – we take pride in ourselves, in our heritage, and no matter what we do, whether it’s school, work or a professional sport like this, we’re going to give it every ounce of blood and dedication we have.”

Hassan especially looks to his father, Redha, for inspiration.

“My grandpa, my father’s father, was illiterate, so my dad would go to the market, run the store, then after school he’d go back to the market,” Hassan recalls. “He became a doctor, did his residency at Johns Hopkins, and that just came from hard work. He’s self-made and that’s what I’ve taken from my family, that anything you want in life, you have to work hard. There are no excuses or shortcuts.”

So despite entering the TUF 21 competition with a fractured hand, one that had taken three and a half years from his career due to four breaks and three surgeries, he showed up willing to fight, even when he wasn’t able.

“I was just itching to go in there and prove my point,” the 32-year-old said. “I came into the show with a fractured hand, so I had to let that heal up a little bit, but once I got the green light, there wasn’t anyone that was going to tell me ‘Hayder, you’re not gonna fight.’ I’m always looking to prove something. And once I was healthy, I’m someone that believes that if you’re healthy, you need to fight and you need to fight as often as possible.”

He did just that, yet throughout the competition, no matter who he was fighting, he had his sights set on the Blackzilians’ captain Kamaru Usman.  On Sunday in Las Vegas, he gets his wish.

“That was the first person I was calling out,” Hassan said. “Plus, he’s the team captain and I’m not about picking safe fights. I wanted the number one guy right from the start. So now we get to fight for the 300 grand and the Ultimate Fighter trophy and the final bragging rights. I couldn’t have asked for anything better. Also, I don’t like Kamaru. I like pretty much all the guys on their team, but I don’t like Kamaru. I don’t like the fact that he called me overrated when I’ve beaten almost the entire team. I beat five guys, I knocked out three of them.

“I’ve been sparring King Mo (Lawal) seven rounds twice a week and he’s a light heavyweight and one of the best freestyle wrestlers in the world,” he continues. “He’s bigger, faster, stronger, and has better everything – he’s Kamaru times a million. And if I can go in there and handle my business against Mo, Kamaru, I’m gonna slap you across the face, dude.”

Needless to say, there’s a lot of heat between these two welterweight prospects, making Sunday’s matchup not just logical, but highly anticipated. And no one wants it more than Hayder Hassan.

“I always fight and I always bring it,” he said. “I’m not someone who’s looking to grind you out, I’m not looking to hold you against the fence or take you down and try to squeeze a win out. I’m trying to knock your head into the upper deck, and that’s my goal. I’ve never been in a boring fight in my entire life.”