Among the Over 60 set in Waianae, Hawaii, Max Holloway is a superstar.

“It’s funny, but a bunch of my fans in Hawaii are older people,” said the interim UFC featherweight champion, who will attempt to unify the 145-pound title against Jose Aldo in the main event of UFC 212 this Saturday in Rio de Janeiro. “A lot of grandmas and grandpas watch the news. I’ve got 70-year-olds coming up to me, and they cry. They thank me for what I’m doing and this is huge. In Hawaii, we haven’t had a champion in forever, and they’re helping me and supporting me.”

Not since 2010, when BJ Penn held the lightweight title, has the island had a homegrown UFC champion, but last December, Holloway brought the belt to Hawaii after stopping Anthony Pettis in three rounds. It may not be the undisputed belt Holloway wants, but that task can be taken care of in a few days when he faces someone he’s targeted since he was a teenager.

“I wanted to fight this guy since I was 17 years old,” Holloway said of fighting Aldo. “I’m here at 25, he’s still at the top of the division, and it’s almost surreal.”

On Saturday night, it goes from surreal to real, and while Holloway’s 10-fight winning streak has shown him getting better and better with each fight, there are question marks around Aldo and whether he’s the same fighter he was before his 13-second loss to Conor McGregor in December 2015. This, despite the fact that Aldo bounced back with a win over Frankie Edgar last July. Regardless of such questions, Holloway isn’t buying into any talk of a declining Aldo. He’s preparing for the killer widely regarded as the best 145-pounder of all-time.

“It’s MMA – you can always improve,” Holloway said. “It’s easy to judge and to point the finger while watching the fights, but it’s a different animal when you get in there. He (Aldo) thinks he sees flaws in my game and I see flaws in his, and we’ll see who’s right. This guy keeps running his mouth, saying that I’m lying to myself and that’s the confidence I need. No, no, no. I never lied to myself. I keep it honest and 100 with myself and I see a lot of things that I’ll be able to do in there, and the world’s gonna see.”

Get Holloway talking about the fight game these days, and his fervor reaches that of a preacher at Sunday services. His cadence speeds up, the volume rises, and the intensity is at a fever pitch. It’s a dedication that shows up on fight night, but even before the Octagon gate closes this weekend, “Blessed” is fired up and ready to fight, and he hopes Aldo is just as prepared.

“Everything I ever wanted and everything I ever had, I worked for it,” he said. “My papa, my grandma, they instilled in me from when I was a young man that if you want something, go out and get it. So that’s why I want the best guy. I don’t want to hear no excuses. Stop being a ‘What If’ guy. I got ready, I did my job, you go do your job. You show up to the fight with your best version, because I am.” 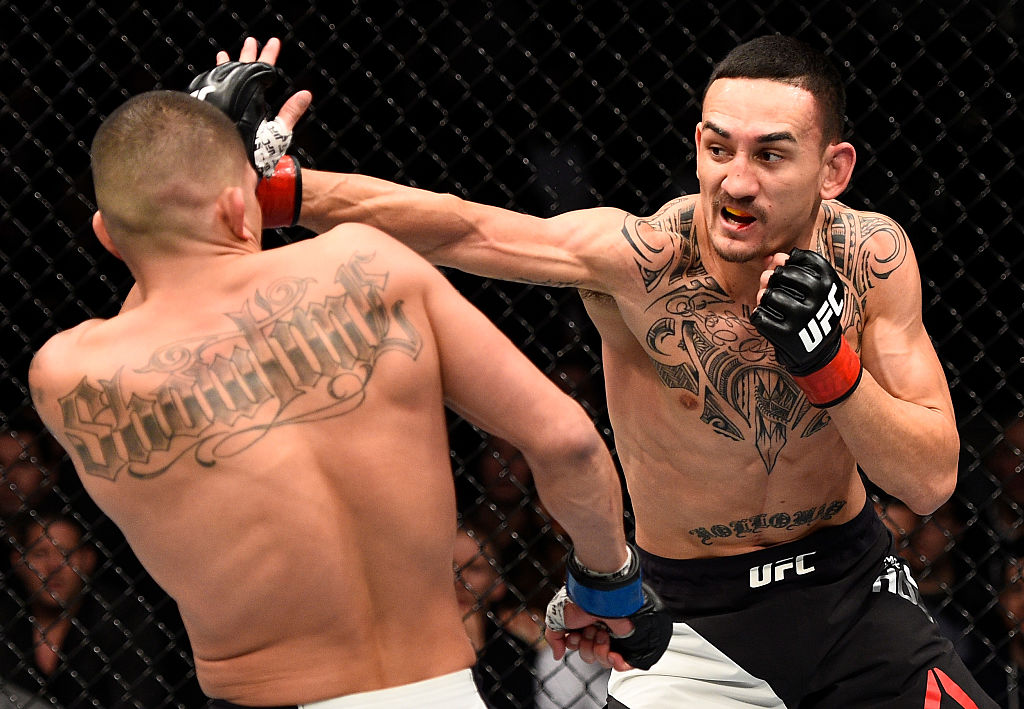 Holloway has been bringing his best for a long time, but he hasn’t forgotten the days after he lost two straight to Dennis Bermudez and McGregor in 2013 and wondered if he would get cut if he dropped a short-notice bout against Will Chope in early 2014. His response was to make sure he secured his spot on the roster, and he hasn’t lost since. Now he’s got an interim belt and he’s one win away from putting the undisputed belt around his waist. If anyone is looking for inspiration, Holloway is providing it.

“I ain’t trying to be average,” he said. “If you’re trying to be average, that means you’re just trying to get by. I ain’t trying to get by. I’m trying to leave a legacy, I’m trying to show my son that if you ever want something, work hard and you can get it. I’m trying to show these kids from Waianae, Hawaii and the world, that if you want something, go out and get it. Don’t listen to anybody. There’s only one person that has to believe in you, and that’s you. Nobody else can do anything for you. Nobody else can lift that weight, nobody can go wake up and do your job. That’s just my mindset. I’m a true believer that everything happens for a reason. I’m glad those two losses happened. I took that short notice fight with Will Chope and now we’re here.”

He pauses, then laughs.

“If I listened to everybody that told me I wouldn’t be here and I got a penny, I’d be a kazillionaire,” he said. “I’m not supposed to be here. People told me that constantly. I didn’t care. You guys don’t believe in me? Cool, watch.”

There are few, if any, non-believers at this point, but Holloway has to believe they are there. It’s a form of motivation for the Hawaiian, and even with a win on Saturday, he won’t be stuck with nowhere to go.