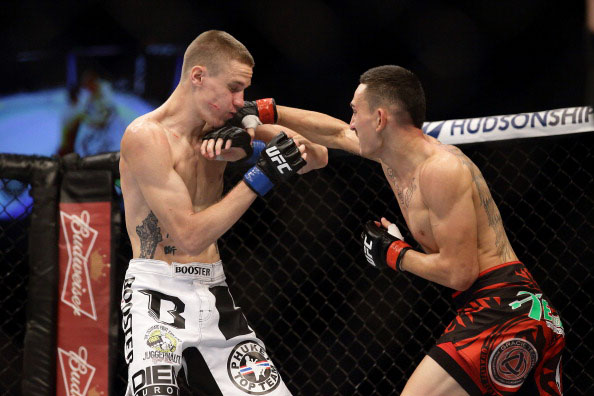 Rising featherweight star Max Holloway capped off a great night for Hawaii at the Marina Bay Sands in Singapore Saturday, as his second round TKO win over Octagon newcomer Will Chope made it three for three for his team in UFC Fight Night action, joining him in the win column with Dustin Kimura and Russell Doane.

Chope worked off any first-time UFC jitters with an active attack, with Holloway forced to pull off some unorthodox moves to keep the Thailand-based fighter off him. In the final two minutes, Holloway finally began to find his range though, and the Hawaiian pounced, landing with hard shots down the middle, forcing Chope to clinch with his opponent against the fence in the final minute before a round finishing barrage of strikes from Holloway.

Holloway continued to press in the second round, and Chope was forced to go on the defensive as Holloway unleashed punches and kicks upstairs and downstairs. After a rough sequence, Chope fired back and then clinched with Holloway against the fence, getting a brief breather. Once the two broke, Holloway went on the attack once again, and this time he dropped Chope to the mat, with a follow up series of strikes prompting referee Leon Roberts to halt the fight at 2:27 of the second round.

Japanese veteran Katsunori Kikuno made it a successful UFC debut, scoring a three round unanimous decision win over Quinn Mulhern.

Scores were 30-27 across the board in the lightweight bout.

The 6-foot-4 Mulhern used his reach advantage well in the opening minute, and when Kikuno 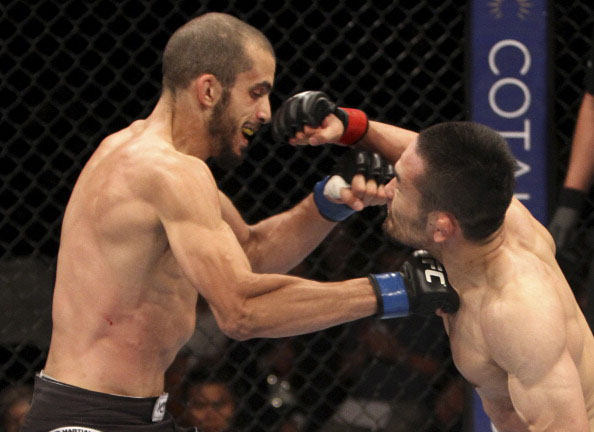 closed the distance, he pulled guard, working for submissions from his back. Kikuno got loose and rose to his feet, opting to take his chances standing as opposed to on the mat. The karate specialist did land some solid shots in between tossing aside takedown attempts, but the bout strayed to the mat once again with under two minutes left, albeit briefly. Mulhern finished the round strong on the feet before pulling guard again just before the bell.

With Mulhern’s takedown attempts coming up empty and fatigue starting to set in, Kikuno was able to take advantage with a conservative, yet effective, output of strikes in round two, but he was far from aggressive in his attack.

A guard pull from the American opened round three, but this time Kikuno stayed more active with his strikes from the top position as he moved into side control and then got back to his feet. After some hard strikes from Kikuno, the bout went back to the mat, and the Tokyo native controlled matters as Mulhern held on, prompting a restart from referee Steve Perceval. With Mulhern cut around his right eye, Kikuno got more aggressive and scored with a takedown of his own in the closing moments of the fight.

With the win, Kikuno improved to 22-5-2; Mulhern, who announced his retirement after the bout, falls to 18-4.

Singapore’s first UFC fighter, Royston Wee, thrilled his hometown fans with a three round unanimous decision win over the Philippines’ Dave Galera in a meeting of unbeaten bantamweight newcomers.

Wee slammed Galera to the mat as the bout opened, with both fighters staying active on the ground. Midway through the round, Galera swept his way off his back, but Wee put him right back there almost immediately, opening a cut over his opponent’s right eye in the process. Yet despite Wee remaining in the dominant top position, Galera’s activity level may have stolen the round for him.

Another Wee takedown followed to open up round two, and the Singaporean’s ground control was just as dominant as it had been, as Galera’s work rate dropped. The two briefly made it back to the standing position in the final minute, but by the time the round ended, it was Wee on top on the mat once again.

Galera finally got his striking game in gear in the first minute of the final round, but his over aggression earned him a trip to the canvas once again. Galera’s frustration was evident when he landed a hard upkick from his back to Wee’s chin, an infraction that earned him a one point deduction from referee John Sharp. Once the bout resumed, Galera made it up to his feet, but Wee slammed him right back to the mat. Galera gamely tried to work for a submission, yet was unable to get it, allowing Wee to secure his first Octagon win. 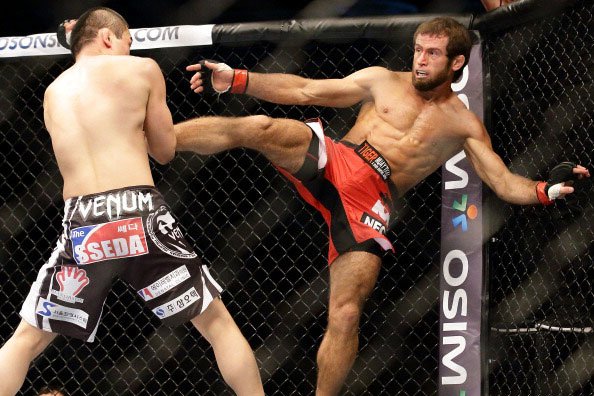 Taisumov’s kicks to the legs and body put him in the lead early, and as the opening round passed the midway point, the Austria product began to bring his hands into play, jarring the South Korean, who kept his hands dangerously low throughout as he marched after his foe.

Mixing things up with head kicks and a quick takedown, Taisumov remained in control in round two, as Bang just couldn’t get into an offensive rhythm.

There was more dominance from the Grozny native in the final round, this time with Taisumov showing off his ground game for much of the frame, capping things off with a throw to the mat in the final 30 seconds that put an exclamation mark on his decisive victory.

Bantamweight prospect Dustin Kimura survived an early onslaught from newcomer Jon Delos Reyes to finish off the Guam native via first round submission.

Delos Reyes (7-3) came out throwing bombs, and within the first 45 seconds he had knocked Kimura to the mat. Kimura (12-1) worked his ground game from his back as Delos Reyes continues to fire away, but the Hawaiian remained poised and secured an armbar, producing a tap out at 2:13 of the opening round.

Hawaiian bantamweight Russell Doane got the night off to an exciting start with a second round submission win over Leandro Issa in a clash of Octagon newcomers.

As soon as Doane let his hands go to open the bout, the Brazil-born Issa took him to the mat. Doane impressively reversed and got back to his feet, going right back to his standup efforts. Issa had to work a little harder for his next takedown but he got it. This time, Doane’s reversal 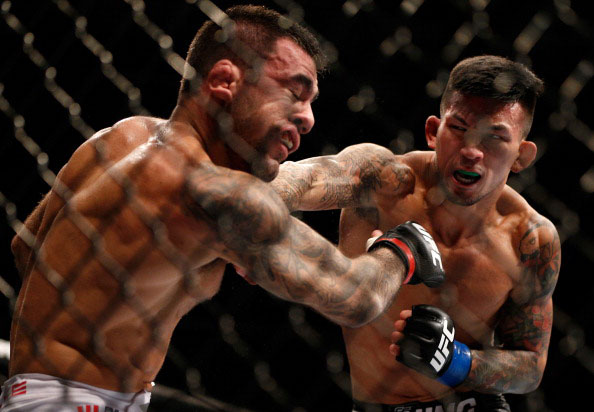 saw him take Issa’s back, and he fired off strikes. Issa stayed calm, and soon he was able to lock in a triangle choke. Doane tried to slam his way out of trouble, and while Issa kept the hold on, Doane was able to make it to the bell.

Issa worked his striking game well in the early part of round two, but the heavy-handed Doane rocked him on a number of occasions with his right hand and he tossed off takedown attempts from the Brazilian. With a little over a minute left, the bout went to the mat, but it was Doane in control as he unleashed strikes and almost locked in an armbar before a triangle choke finished matters at 4:59 of the second frame.