Having Seen Almost Everything, Brenneman is Prepared for Anything 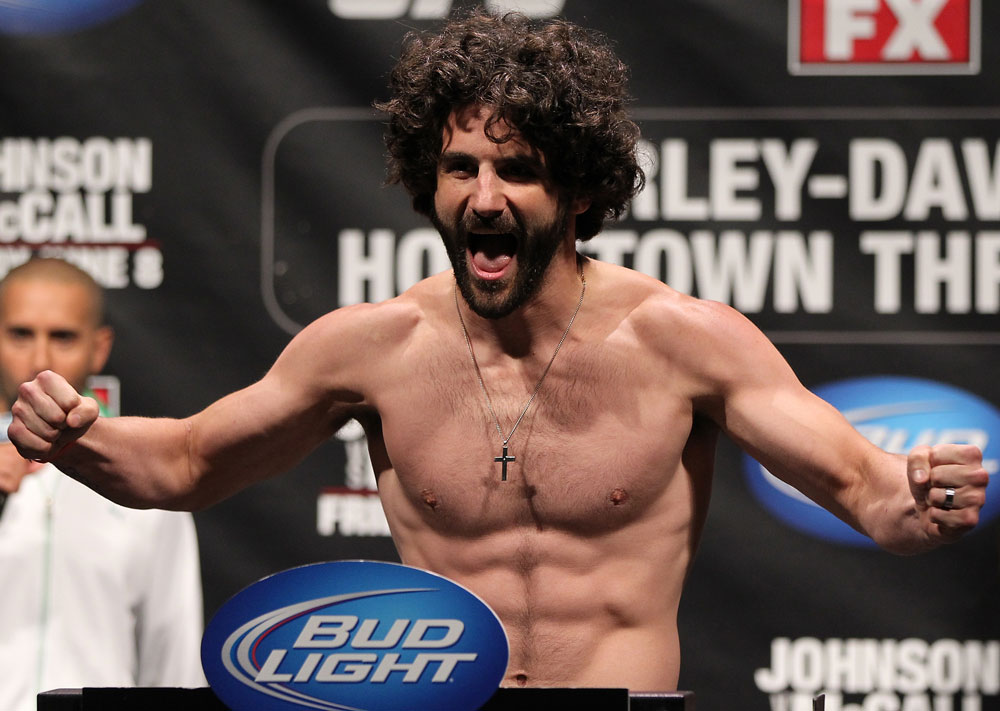 It’s impressive enough that the small AMA Fight Club in Whippany, New Jersey has produced several UFC and Strikeforce fighters over the years. I’m more impressed that they make weight, considering that their gym has been non-strategically placed right next to a place called the Original Pancake House that can turn featherweights to welterweights in the blink of an eye or the wave of a fork.

So when it was announced that September 1st’s UFC 151 was being scrapped, you had to worry about the well-being of AMA welterweight Charlie Brenneman, scheduled to open up the Las Vegas event against Kyle Noke. If there was too long a break before the fight was rebooked, Brenneman could have easily been asking UFC matchmaker Joe Silva for a fight at 205 pounds.

But later on the same Thursday that the event was cancelled, Brenneman and Noke had a new date – September 22nd on Toronto’s UFC 152 card. Was it too late?

“No, but I will say I’m probably gonna have some hot wings tonight,” laughed Brenneman shortly after hearing the news. “I’m gonna cave a little bit.”

He earned it after a 2012 that has sent him swirling through every point on the emotional spectrum. From a big win to a big loss, from getting married to going through the death of a beloved coach, Brenneman had seen it all in 2012, even before the crazy 12 hours of August 23rd. In fact, he had already been through so much that the day was almost routine…or at least par for the course.

“It was a normal 12 hours, it was a normal great training day, and without a doubt it was a whirlwind, but to be honest, I guess I’m kind of a veteran, and I’ve been involved in some pretty wacky stuff in my UFC career, so this almost just seems like another day,” he said. “After the whole (Rick) Story incident, it’s kinda hard for something to happen where I’m completely blown out of the water. So yeah, this is crazy, but it ended up all right, so I can sleep peacefully.”

It was the June 2011 fight with fellow 170-pound prospect Story that made Brenneman’s name in the sport. Stepping in for Nate Marquardt just before the weigh ins, “The Spaniard,” fighting in his home state of Pennsylvania, upset Story with a modern day “Rocky” story that captivated the MMA world.

He lost his next bout a little more than three months later to Anthony Johnson, but a January 2012 win over Daniel Roberts righted his ship and put his UFC record at 4-2. Then came a June matchup with Brazilian phenom Erick Silva, and Brenneman was confident that he had the skill set and gameplan to get the victory. But as weigh in day dawned, Brenneman got the call that his strength and conditioning coach, Don Messing, had died of a heart attack. He was only 42 years old.

“There was really no question what I was gonna do,” said Brenneman. “It sounds cliché to say, but there’s nothing more he would have wanted than for me to go out there and do my best. Obviously I felt pressure, and it sounds weird to say, but I was comfortable with our relationship and the way we ended, and to know that there was nothing more that he wants than for me to keep going to the top.”

Brenneman went through with the fight, and though it was competitive throughout the early going, late in the first round Silva caught him in a rear naked choke and finished the bout.

“I had so much else going on that it was really hard for me to be in that moment,” said Brenneman. “It was extremely hard to concentrate. That being said, I was really happy with how I fought for the first three or four minutes of the fight. I let loose on some of my combinations and my standup was a little more fluid, so it was a step in the right direction.”

And while the loss to Silva stung, the loss of Messing hurt, and you can still hear it in Brenneman’s voice.

“I was a novice,” he said when asked what Messing brought to the table for him in their years working together. “I thought I knew a lot about lifting and fitness and nutrition, but I learned so much. Straight technique, then diet and nutrition, and what my body needed to compete at this level. And to be honest, it took up until his passing until I really took that to the next level and I’ve really started implementing that into my lifestyle.”

Now it’s time to move forward, and the next step on the 31-year old’s journey is the meeting with Noke, a seasoned veteran making his first start at welterweight. Brenneman believes taking him on in his 170-pound debut is a mistake for the Australian.

“Maybe if he looked at a piece of paper, maybe he could find a more dangerous, more of a finishing opponent than I am, but I don’t know if there’s anyone who pushes the pace constantly and grinds constantly like I do,” he said. “And for him to have his first fight at 170 against an opponent like that, it’s not gonna be fun.”

So is Brenneman is taking a page from the playbook of Noke’s teammate, Clay Guida, and looking to make his opponent miserable for 15 minutes or less in Toronto?

As for the difficulties that Noke presents, Brenneman says that they’re everywhere.

“Erick Silva is a crazy Muay Thai kickboxer, Johny Hendricks is a stud at wrestling, Anthony Johnson is the biggest guy in the weight class, and Kyle brings a well-rounded approach to the fight,” said Brenneman, comparing Noke to previous foes. “It’s one of those fights that I don’t have to necessarily be on the lookout for one thing; I kinda have to be on the lookout for everything.”

He’s prepared for that though, and having talked fighting with Brenneman since his UFC debut in 2010 against Jason High, he’s never sounded more relaxed or confident. It’s as if there’s nothing to be thrown at him that he hasn’t seen before, and with that knowledge in his head, it’s all good things from here on out.

“I hate saying it because you do interviews and you say the same stuff before every fight, but if you really and truly ask me, physically and mentally, how I feel for this fight, it’s the best I ever felt,” he said. “There’s no pressure, and it’s fun. I was thinking of my walkout song and I think I’m gonna go back to the old school stuff I was into back in the day, and I just want to go out, not put any pressure on myself, and have fun and enjoy the moment because this is my life, this is my career, and I’m living it right now.”