"I am proud of being a Japanese fighter. To me, the Japanese
fighting spirit symbolizes overcoming obstacles and growing after every
combat." - Hatsu Hioki 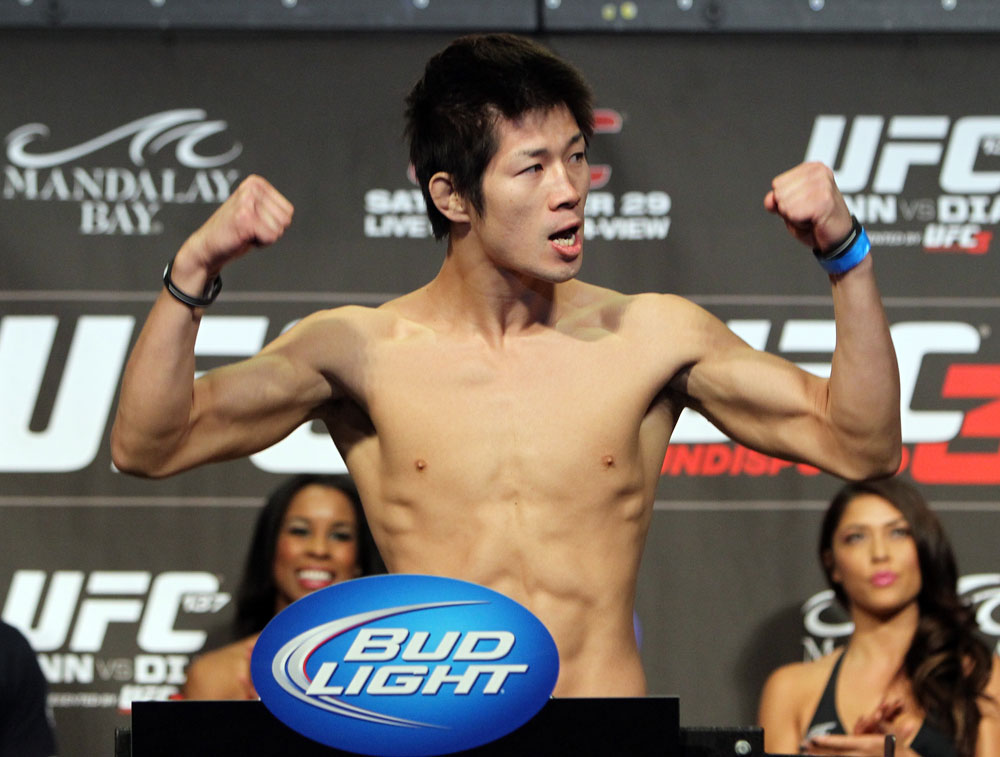 Featherweight contender Hatsu Hioki is under no illusions about his debut win in the UFC over George Roop last October. He knows it wasn’t his best performance and he is well aware that he didn’t display the skills that had him dubbed before the fight as the best featherweight not fighting in the Octagon.

“That was a tough fight, and because of that, it was a very educational one, since I got to know what to work on in training,” said Hioki through translator / manager Kei Maeda. “I was not nervous, but my preparation and thoughts about fighting in the UFC environment were premature, so to speak.”

That was then. Four months later, Hioki has put the disappointment of his razor-thin split decision win aside, and now all that matters is showing off the “real” Hioki in front of his home country fans in Japan this Saturday against Bart Palaszewski, a welcome surprise to say the least.

“I thought I was not going to have an opportunity to fight in Japan for a while, so I am glad I have gotten that opportunity this quick,” he said. “I'm motivated.”

A recurring theme this week for the Japanese fighters on the card is that this event at Saitama Super Arena isn’t just an opportunity to get another win, but to help kickstart the flagging Japan MMA scene. Hioki is on board with that train of thought, saying “I believe this event will be one important step towards bringing heat back to Japanese MMA, as well as the implantation of the UFC brand in Japan,” but when it comes to his personal goals, he simply says, “I will fight as it is one of the UFC fights, not as one of the fights in Japan.”

That’s a strong step in terms of establishing his presence in the UFC’s featherweight division. The first was getting that initial win out of the way. The next is treating this like any other UFC fight, and the most important is to look at Palaszewski as the most dangerous opponent of his nearly 10 year pro career.

“Bart is very aggressive with his hands so I will have to be careful not to let him connect and not to give him his momentum,” said Hioki (25-4-2) who could actually put himself in the race for a shot at Jose Aldo with a big victory. The 28-year old from Nagoya was impressed with the champion’s “killer instinct and takedown defense” in his January win over previously unbeaten Chad Mendes, but he’s not in a rush for a title bout just yet.

“I would like a few more fights and wins under the UFC rules in overseas shows before getting the title shot if I win this one,” said Hioki, a proud native of Japan eager to show the rest of the world just what it means to be born with the Japanese fighting spirit.

“I am proud of being a Japanese fighter,” he said. “To me, the Japanese fighting spirit symbolizes overcoming obstacles and growing after every combat. As ancient samurai warriors always held the belief, the words also mean to respect a person in fighting, and pursue a form of beauty during the fight.”

That’s definitely the goal this Saturday in Saitama, and beyond.

“I would like to display how I have overcome weaknesses that shown in Roop fight,” said Hioki. “Please expect to see that I belong in the UFC.”