"I will work my way up again to become a contender soon." - Hatsu Hioki 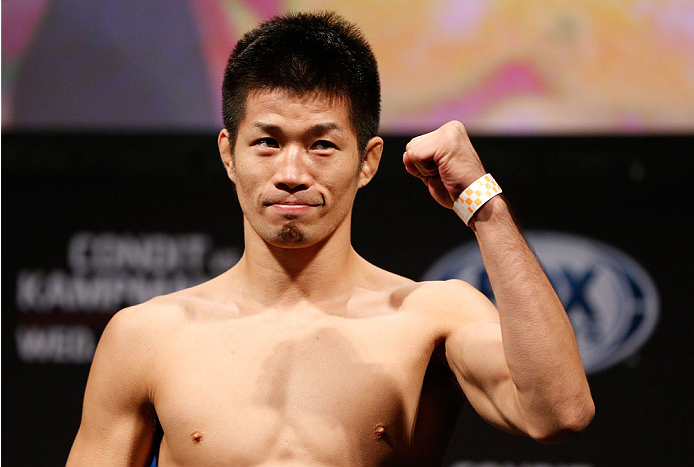 In 2012, two fights and two wins into his UFC career, Hatsu Hioki made a decision that shocked many, turning down a shot at featherweight champion Jose Aldo, instead opting to take another fight before facing the Brazilian star.

It was a gutsy and honest move by the Nagoya native, and you had to respect it, even though his loss in his June 2012 bout against Ricardo Lamas, and two subsequent defeats to Clay Guida and Darren Elkins took him out of the 145-pound title picture and placed him in a must win situation heading into Saturday’s matchup against Ivan Menjivar. As for the fighter himself, he would do it all over again.

“I never regret my decisions,” said Hioki through manager / translator Kei Maeda. “I will work my way up again to become a contender soon.”

It’s the confidence of a fighter who has been too good for too long to let this run of bad luck keep him down. Before his recent three fight skid, the 30-year-old was unbeaten in 15 of his 16 previous bouts, with his only loss coming via split decision to UFC vet Michihiro Omigawa in 2009. In other words, his arrival in the UFC was a big deal, and he was believed to be a strong candidate to become the first Japanese fighter to win a world title in the organization.

There would be growing pains though, with Hioki calling “time lag” his biggest adjustment. It’s not something you can dismiss either, as his win over Bart Palaszewski at UFC 144 in Saitama, Japan was his most impressive Octagon victory, with his other bouts in the United States not truly showing off his complete skill set.

Saturday, he won’t be home in Japan, but competing in Macao, China, he expects to be in a locale more agreeable to him.

“The time difference is minimal and the food will be what I normally eat in Japan, so this is huge,” said Hioki, obviously pleased to be fighting in Asia this weekend. He also feels good about his chances against Menjivar, who is moving back to featherweight after a run at 135 pounds.

“He has his ways to finish fights, but I won't let him play his game,” said Hioki. “I feel I have a physical advantage and will capitalize on it.”

You might also assume that after consecutive bouts against swarming wrestlers Lamas, Guida, and Elkins, facing Menjivar will be a nice change of pace.

“A lot of people tend to think I am not fond of fighting against wrestlers,” he laughs. “But I can tell you that this fight against Ivan will be more fun to watch than my last three fights.”

When Hioki is on, he does deliver a high-level form of MMA with technical wizardry that can give anyone fits. And the scary part is that at 30, he says he’s far from done.

“Let me put it this way, I'm constantly evolving.”

First though, he needs a win, and he knows it.

“There’s definitely more weight on this one because of my recent streak of losses,” he said.
“And there are ups and downs, but I have friends and family who support me unconditionally, so that's what gets me motivated.”

“The resurrection of Hatsu Hioki.”