"I’m a hundred percent driven for this one and whether it be an overseas opponent or a fellow Brit, it doesn’t matter to me. This is my job and this is what I want to do." - John Hathaway 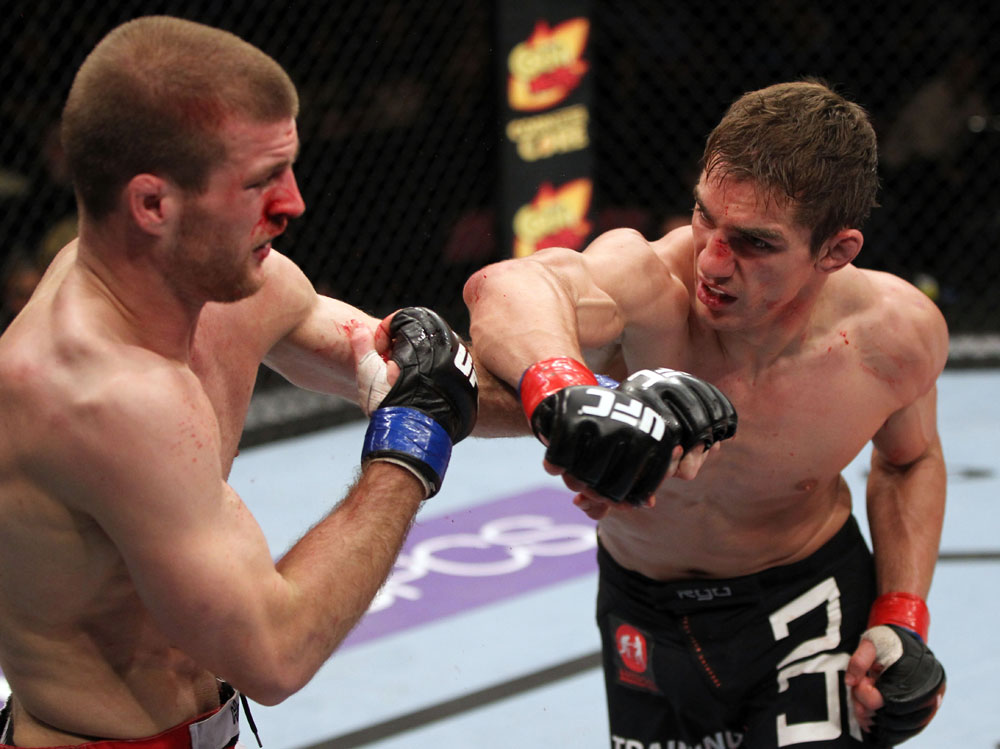 In boxing, some of the most heated battles England has seen over the last 25 years have taken place between domestic rivals: Lennox Lewis vs. Frank Bruno, Nigel Benn vs. Chris Eubank, and most recently, David Haye vs. Dereck Chisora. But when two of the UK’s top rising stars in mixed martial arts – John Hathaway and John Maguire - meet this Saturday night in Nottingham, it’s all smiles and admiration before fight time.

“For me, it’s just another fight, and I concentrate a hundred percent on every single fight and I don’t want to make any mistakes,” said Brighton’s Hathaway. “I want to get in there and prove that I’m the better competitor on this occasion. I’m a hundred percent driven for this one and whether it be an overseas opponent or a fellow Brit, it doesn’t matter to me. This is my job and this is what I want to do.”

It’s the answer you would expect from the 25-year-old, one of mixed martial arts’ true gentlemen and one of those fighters you couldn’t even imagine engaging in a pre-fight trash talk war. He couldn’t imagine it either.

“Sometimes you can find it funny and sometimes you find it a little bit too extreme,” he said with a laugh. “A lot of the stuff (former middleweight title challenger) Chael Sonnen says makes me laugh, and I enjoy watching his interviews; sometimes he’s incredibly smart and incredibly witty. But for me, I can only ever be myself. That’s all that’s ever been asked of me and it’s all I can be, and it’s not something I can do even if I tried it. It probably wouldn’t end up well. (Laughs) But some people can do it really well.”

Not that taking the high road in the lead up to a fight is a bad thing. And even though he and Maguire share that same philosophy, you can expect that when it’s time to fight this weekend, they will battle it out tooth and nail until a winner is declared. 34 combined wins against only four losses don’t lie. And as much as they may be class acts outside the Octagon, they turn into fierce, single-minded competitors at the sound of the bell, with this one holding even more weight because if the high-stakes involved.

“This is the fight which is going to get me that top ten opponent and be able to move on and get another one and get to that title,” said Hathaway, 16-1. “I get this win, I can get someone who would be able to shoot me up and get me into that title contention spot that I want to get into.”

A UFC vet approaching his fourth year in the organization, Hathaway has basically grown up in the Octagon, progressing from a raw talent blasting through Tom Egan in his debut at UFC 93 to a legit threat in one of the toughest divisions in the game. His rookie year doesn’t seem that long ago to him, but he does admit to having developed considerably since 2009

“Almost four years isn’t too long, but I’m definitely more comfortable in this sport and in this organization we’re in now,” he said. “I’m just taking parts from other fighters and trying to act as well as I can and follow in their footsteps because there are a lot of great fighters in this organization and a lot of great ambassadors for the sport. So it’s a mix of both. I’m definitely getting more comfortable the more fights I have in the UFC, but it’s not too long from when I first joined.”

After winning his first four UFC bouts, including an upset victory over Diego Sanchez in May of 2010, Hathaway returned home as one of the UK’s holy trinity of MMA fighters, along with Michael Bisping and Dan Hardy, for UFC 120 in October of 2010, and he had the media obligations and pressure to go along with it. And though he handled the spotlight as well as could be expected, the ensuing fight didn’t follow suit, as he was handed his first pro loss by veteran Mike Pyle. Looking back, it was a lesson learned.

“I tried to take everything in my stride as I always do, but I definitely cope with it a lot better now and I think it was a good experience,” he said. “I got kinda chucked in the deep end for that one, and it’s definitely made me be able to cope with anything now. Obviously it’s never been as hectic as that since, but I think it definitely brought me up and made me grow up a little bit in the sense of being able to do these kinds of interviews and having that pressure on me.”

Since then, Hathaway has dealt with injuries while scoring two wins over Kris McCray and previously unbeaten Pascal Krauss. Admittedly rusty after more than a year on the sidelines, “The Hitman” warmed up and gutted out the win over Krauss in May, a major statement in his trek up the 170-pound ladder.

“It was good to get back in there and get the win and compete against someone as tough as Pascal,” said Hathaway. “There was a little rust on that night and stuff like that, but it’s been snowballing on since then. I just want to keep improving and get my game up.”

Next up is Maguire, a submission ace who is unbeaten in two UFC starts. Hathaway has known of the Cambridge product for a while since they came up on the same UK circuit, and he’s looking forward to testing himself against someone he’s been friendly with over the last few years.

“Obviously we were on the local circuit together, competing when we both came out and started building up together, and we were actually going to fight once before, but he got injured,” said Hathaway. “I’ve known about John for a while, we’ve bumped into each other quite a few times on different shows and we always chatted and been nice to each other, so it’s interesting now that we’re competing against each other and I’m looking at him more as an opponent.”

And with Maguire as an opponent, Hathaway has to be all business this weekend. A win pushes him further, a loss drops him a few notches. That’s what the fight game is all about in the simplest of terms, and he likes it that way.

“I want to put on a good performance and I really want to get this win,” he said. “Obviously the last time I competed over here it didn’t go so great, so I’m definitely determined, I’m incredibly strict and on the ball this time around and just making sure everything goes right and I’m not leaving anything to chance.”