"The great part about the UFC is that you never really know what’s going
to happen. It’s the unknown that any fight can end with one
punch or one submission at any moment." - Kevin Harvick 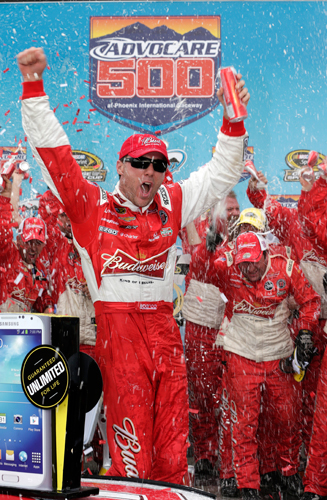 He can be unpredictable at times, but anyone who has run into UFC lightweight contender Donald Cerrone will almost always say that you can’t help but like “Cowboy.” NASCAR superstar Kevin Harvick would agree. In fact, he liked him so much he signed him to his management company Kevin Harvick Incorporated (KHI).

“It felt like we had a good system and we felt like Donald would fit in with who we were and what we trying to do, and it really helped us branch out into looking at doing something different,” said Harvick. “It’s been a great avenue for us, as Kevin Harvick Incorporated, to represent somebody like Donald. He’s been good to work with and he’s obviously a lot of fun to be around, and hopefully he has a good weekend and makes it all happen.”

This weekend, Cerrone will look to bounce back from an August loss to Rafael dos Anjos when he takes on Evan Dunham in a highly-anticipated UFC 167 prelim matchup that will set the stage for the Pay-Per-View main card to come. Unfortunately, Harvick won’t be in attendance at the MGM Grand Garden Arena on Saturday, as he’s got some business to tend to on Sunday in the Ford EcoBoost 400 at the Homestead-Miami Speedway in Florida.

For Harvick, who won the Advocare 500 in Phoenix last Sunday, it’s not just the season finale, but an opportunity to catch lightning in a bottle as he attempts to unseat current points leader Jimmie Johnson for the Sprint Cup championship. It’s a longshot for Harvick, who is currently in third place, 34 points behind Johnson, but if being a fan of mixed martial arts has taught him anything, it’s that fighters like Matt Serra and Chris Weidman were never concerned with being longshots.

“It’s kind of like that Hail Mary situation where we’re definitely behind and it’s gonna take some pretty drastic scenarios for things to happen, very similar to what happens in the UFC,” said Harvick. “It just takes one instance and you have to capitalize on it to make it all happen. For us, it’s the same mentality that we took into last weekend and really the last month or so, to try to go out and win the race and lead the most laps and gain the most points as possible. That’s what we can control, our car and the things that it does, so hopefully we can do that again this weekend and see where the rest of it falls.”

Unlike MMA though, there are hundreds of pieces needed to make a NASCAR driver’s car go, and we’re not just talking about the parts of the vehicle. Add in the mental part of the sport, and it’s a complex chess game taking place on the track and in the pits.

“In our sport, there are so many people that touch the car,” said the 37-year-old Bakersfield, California native. “In our organization there’s about 550 people, and it’s the old saying in business: you’re only as good as the people that are around you. So it’s really about the chemistry and the things that are going on, and right now, our team feels good, so from a mental standpoint, I think everybody’s mentally tough and we know we don’t have anything to lose, so we can go out and try to swing for the fence, and if you can connect, you never know what can happen from there.”

Hearing Harvick talk about racing and comparing it to Cerrone talking about fighting, you can easily see how the two hit it off when they first met a few years back at the Texas Motor Speedway.

“He was a down to Earth guy that wanted to be successful at what he was doing, and over the past few years we got to know each other a little bit better,” said Harvick. “He was around us at the racetrack and has been to a few different races and to Daytona and he got to spend the whole week with us a couple years ago.”

From there, Cerrone casually mentioned the possibility of Harvick and his team taking over managerial duties. Soon, it was a done deal, one that KHI takes very seriously.

“You want to do things right, and the biggest thing for me is that I want Donald to feel like he can concentrate on what he needs to from the training aspect to the mental aspect to get the most out of himself and not have to worry about the stuff away from that,” said Harvick, who, despite having a race on Sunday, will be watching his friend and client’s fight onsite Saturday night.

“We’ll shut down everything to watch the fight,” he laughs. “We’ll be stationed in the motor home and we’ll watch every fight as they come on FOX (Sports 1) and right through the Pay-Per-View. We definitely have a vested interest in what’s going on with Donald.”

He’ll also have an eye on another fighter on the card, main eventer Johny Hendricks, who Harvick has also become friendly with in recent months. And though you wouldn’t normally look at MMA and NASCAR and find the correlation between a fight sport and a motor sport, odds are that if you find an MMA fan, he’ll like NASCAR, and vice versa. It’s a big reason why Harvick and the fighters of the UFC have become friends – simply put, they share common interests.

“I think the root of both sports is that they’re blue collar sports that attract blue collar fans, and most of us, whether it’s a fighter or driver, have come from similar backgrounds,” said Harvick. “My mom was a secretary at the local elementary school, dad was a firefighter, so we grew up as normal people, we can relate to normal people, and while we’re fortunate to be successful at what we do, we still live a normal life and do normal things. The fans are very loyal as well, and have the same brand loyal people as in NASCAR. If you have a Budweiser sponsorship and you’re a fan of the 29 car, they’re not gonna go out and drink another beer because they know that’s what makes that car go around the racetrack. They’re loyal fans and down to Earth blue collar people just like the people that are fighting and driving in the sport.”

Harvick has another reason for enjoying the sport, as he was a four-year wrestler in high school. But if you ask what the true appeal of the sport is for him, he doesn’t hesitate in his response.

“The great part about the UFC is that you never really know what’s going to happen,” he said. “It’s the unknown that any fight can end with one punch or one submission at any moment. And through Donald and Johny Hendricks, the guys we’ve been able to be around a little bit, you see the time and dedication that they put in to be good at what they do, and you have to be such a well-rounded athlete to be successful.”

So, Mr. Harvick, what’s the call on this weekend’s main event?

“I’m a little biased on this question with Johny,” he said, “but blocking that out of my mind and looking at it, obviously GSP’s a good wrestler and can figure out pretty much anything,  but Johny’s got that punch that he can unload at any time, and he also has the wrestling right to go along with it. There’s obviously a lot of hype and a lot of build-up, and personally I want to see him (Hendricks) win, but I think he’s got the tools to do it as well.”