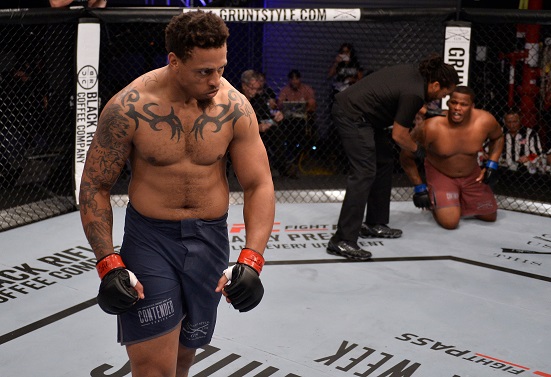 Greg Hardy celebrates after his TKO victory over Tebaris Gordon in their heavyweight fight during Dana White's Tuesday Night Contender Series at the TUF Gym on August 7, 2018 in Las Vegas, Nevada. (Photo by Chris Unger/DWTNCS LLC)" align="center" />
After seven weeks, 19 contracts, two developmental deals, one spot on Season 28 of The Ultimate Fighter and a trio of Octagon debuts for victors, Season 2 of Dana White’s Tuesday Night Contender Series wrapped up this week with one final electric night of action in The Ultimate Fighter Gym in Las Vegas, Nevada.

The surprise hit of last summer became must-watch viewing for fight fans this year, as the quality of competitors and the competitiveness of the matchups increased exponentially, resulting in a handful of fighters with the potential to become future factors in their respective divisions being added to the UFC roster.

This week marked the return of Season 1 winner Kennedy Nzechukwu, who was looking to become the fifth returning fighter to earn a victory this season and the fourth to collect a contract, as well as the second appearance of former NFL standout Greg Hardy, who earned a development deal with his Week 1 knockout of fellow draftee Austen Lane.

In a season where there were tons of explosive performances, it was fitting that all five of the bouts on Tuesday’s finale ended without seeing the third round and the final three coming to a close before the first five minutes expired.

After a quick consultation with matchmakers Sean Shelby and Mick Maynard, UFC President Dana White came out and added three more fighters to collection of competitors graduating to the UFC from the Contender Series, bringing featherweight Bobby Moffett, lightweight Devonte Smith and light heavyweight Kennedy Nzechukwu to the UFC roster.

Here’s a look at how things played out on the final week of the season.

WELP. That was fast. @greghardyjr leaves no doubt in this one! pic.twitter.com/gfwcr7TCBN
— UFC FIGHT PASS (@UFCFightPass) August 8, 2018

Hardy picked up his first professional victory by knocking out Lane in Week 1 and was looking to continue his winning ways and rapid transition from the gridiron to the Octagon by returning eight weeks later in search of his second career victory.

Standing in his way was Gordon, a 30-year-old North Carolina native who picked up a pair of stoppage wins last year to push his record to 3-0 overall.

Herb Dean with the final officiating assignment of the year.

Hardy comes out swinging and Gordon is done. Non-stop diet of bombs from Hardy and Gordon ends up face down on the canvas in no time.

Official Result: Greg Hardy def. Tebaris Gordon by KO (punches) at 0:17 of Round 1

The penultimate bout on Tuesday’s season finale was a lightweight contest between a pair of promising upstarts, as unbeaten CFFC lightweight champ Joseph Lowry squared off against once-bested Ohio product Devonte Smith.

Chris Tognoni in the cage with the lightweights.

Both men pumping the jab out there to start, Smith landing the cleaner shots in the opening minute before Lowry responded with a solid combination and an early investment to the body. A low kick from Smith buckles Lowry’s knees a little and he follows up with hands behind it. Lowry presses forward for a takedown and Smith unleashes the “Hapa Elbows” to the side of the head and Lowry goes limp.

Official Result: Devonte Smith def. Joseph Lowry by TKO (elbows) at 2:52 of Round 1

The swing bout on the Season 2 Finale took place in the light heavyweight division, with Kennedy Nzechukwu looking to build on his split decision win over Anton Berzin last year with a strong showing against Dennis Bryant.

Since that first appearance on Week 7 of Season 1, the 26-year-old Fortis MMA product Nzechukwu has added a pair of stoppage wins to his resume to push his record to 5-0 overall. Looking to halt his unbeaten run and make an impression of his own was Bryant, a former heavyweight from Anchorage, Alaska with a 5-1 record and four straight victories.

Herb Dean with the assignment alongside the light heavyweights.

A long jab lands for Nzechukwu right out of the gate. Bryant countering with inside leg kicks, but the early long punches are already causing some redness. A head kick from Nzechukwu lands and he hits Bryant in the back of the head as he charges in, which prompts Nzechukwu to stop himself.

Back in space, Nzechukwu unleashes another head kick and it’s a wrap. Bryant falls and we’re done. Another Fortis MMA prospect makes a statement on the Contender Series.

Official Result: Kennedy Nzechukwu def. Dennis Bryant by TKO (head kick and punches) at 1:48 of Round 1

A teammate and training partner of Week 3 standout Te Edwards at The MMA Lab in Glendale, Arizona, Moffett made enough of an impression on Dana White during a recent episode of Lookin’ for a Fight to earn a shot to compete on the Contender Series.

If he was going to join Edwards and Season 1’s breakthrough star Sean O’Malley in joining the collection of John Crouch-coached fighters on the UFC roster, he would need to get through Kilburn, a 23-year-old Tennessee native with a background in judo and a three-fight winning streak heading into Tuesday night’s pairing.

Chris Tognoni with the refereeing assignment.

Moffett lands an early right hand and almost immediately puts Kilburn on the canvas with an easy takedown. Up against the fence, Moffett is working for an arm-triangle choke, but it’s not there, so he pulls Kilburn to the center and keeps working to advance and looking for setups. Moffett tries to lock up the arm-triangle choke, climbs to mount, but Kilburn defends and escapes. Short elbows from Moffett on top and he slides into mount, looking for the choke again.

Now postured up in a high mount position, Moffett starts to land punches. Kilburn trying to buck, but he can’t shake Moffett, who continues with the short elbows and punches through to the horn.

Kilburn is swinging wild to start round two, he throws a spinning kick, misses and gets taken down. Moffett sets up a D’Arce choke and Kilburn has no choice but to tap. Just a dominant effort from the MMA Lab product.

2 fights tonight. 2 taps tonight. This time @bobby_thewlfmn is the one getting it done! pic.twitter.com/T1uHKfOPQF
— UFC FIGHT PASS (@UFCFightPass) August 8, 2018

Promising featherweights looking to continue their ascent up the competitive ladder met in the night’s opening bout, with the 26-year-old Alex Gilpin facing off with unbeaten Oklahoma native J.R. Coughran.

While the latter carried a perfect record into the cage for his UFC audition in front of Dana White, Sean Shelby and Mick Maynard, the former had only suffered a single setback prior to Tuesday night, falling to Dan Moret, another in the long line of tough outs in the lighter weight class from the MMA Lab, two years ago.

Chris Tognoni was the third man in the cage.

Coughran throws early and often, mixing punches and kicks and changing his levels to start. Just over a minute in, Gilpin started to find his range a little, snapping Coughran’s head back with a couple quick, clean punches. Whenever Gilpin lands, Coughran responds with a combination of his own, making sure to even things out.

With 90 seconds left, they start trading heavy fire, Gilpin starting the back-and-forth and getting the better of things early before Coughran responds in kind to finish an entertaining opening round.

Gilpin counters well, catching Coughran as he wades in, swinging wide to start the second round. The looping left hand continues to score for Coughran, but Gilpin quickly decides to take the fight to the canvas and he’s instantly looking for the D’Arce choke. Coughran tries diligently to fight it off, but as Gilpin traps the legs and tightens his squeeze, Coughran is forced to tap.