"Taking that year off and focusing more on that other side and that teaching and coaching aspect of myself, I found that I get as much satisfaction from that as from fighting itself.” - Antoni Hardonk 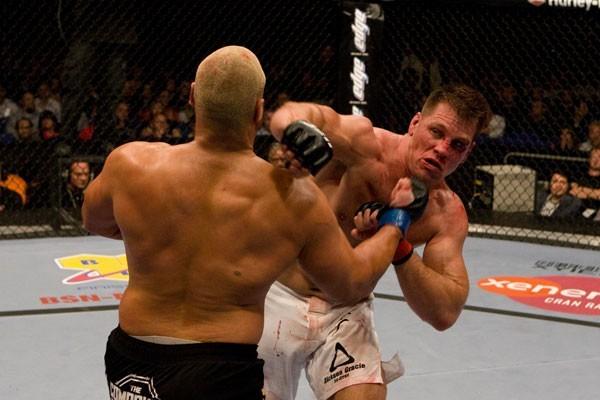 It must be something in the air. First Ricardo Almeida, then Randy Couture, and now Antoni Hardonk. They’ve all announced their retirement from the sport of mixed martial arts as active participants, but as the Dutch striker insists with a smile, there was no meeting of the trio before these announcements.

“I don’t know what their reason was and I can’t compare myself with them,” said the 35 year old former heavyweight standout. “They’re great athletes, great champions, and they have a different story than I do. For me, it wasn’t really something that I planned, like ‘oh, I’m at a certain age, I’m going to retire.’”

For Hardonk, who leaves the game with an 8-6 MMA record as well as a 10-5 slate in pro kickboxing, it all came down to a choice between his first love – fighting – and a new one – coaching – in the aftermath of back-to-back losses to Cheick Kongo and Pat Barry in 2009.

“My last two fights in 2009, I wasn’t really happy with the way I prepared myself leading up to the fights, my living situation, or the results of the fights,” he said. “So at the end of 2009, I wanted to make some changes.”

The first was to relocate from his home in the Netherlands to Los Angeles so he wouldn’t have to commute back and forth to get his wrestling and jiu-jitsu training in the States while going home for striking training and a teaching gig.

Next step, to open his own school, Dynamix Martial Arts, in Santa Monica.

“I decided to settle in California and open up my own studio,” he said. “I had my own space where I could train the way I wanted to with the people I wanted to. I always had an interest in teaching so I thought I could start teaching and build a team around me, and that’s what I did. I took a hiatus in 2010, I opened up my gym in spring of 2010, started teaching and started building a team, both for recreational practitioners that love the sport, and for some of the guys that I always trained with like Vladimir Matyushenko, Jared Hamman, and some other fighters that joined us. And I got more into the role of trainer / coach. I still had fighting in my head because I was still young and I love competing, but I got so busy that going into 2011, I felt that I was really motivated in teaching and coaching and I wasn’t really training myself as much.”

So as the weeks turned into months, it was clear that Hardonk’s passions had shifted. He still loved the sport, but if he couldn’t prepare the way he wanted to and still give a hundred percent to his coaching and his gym, he wasn’t going to fight.

“Fighting is a full-time job,” he said. “It’s not something you can do on the side, and I didn’t want to do things halfway. I didn’t want to run my gym halfway and I didn’t want to train for a fight halfway. If I go into the Octagon, I want to be the best Antoni Hardonk ever and I want to surprise people with my new skills and I want to show a better version of me. And I felt that that was going to be difficult, so I thought about it for a while, and then I pulled the trigger and decided that I love teaching and coaching. It’s something that I’d like to focus on now and in the future.”

So far, it looks like he’s made the right choice. Hamman is coming off a 2010 campaign where he’s earned back-to-back Fight of the Night awards, occasional gym member Stefan Struve continues to impress, and Matyushenko has become a veritable knockout artist, knocking out both Alexandre Ferreira and Jason Brilz in his last two bouts, the latter finish coming in just 20 seconds.

“Not bad for a 40 year old wrestler,” smiles Hardonk, who admits that he gets more joy watching his fighters do well than he ever felt in competition.

“It’s amazing and I can enjoy seeing somebody that I’ve been working with compete and succeed than competing for myself because I’m my worst critic, and even when I win, I still see mistakes.”

A UFC vet since 2006, when he debuted at UFC 65 with a knockout of Sherman Pendergarst, Hardonk finished up with a 4-4 slate in the Octagon, but even though he left on a losing note with a TKO loss against Pat Barry at UFC 104 in October of 2009, it was a Fight of the Night performance that saw him go out with guns blazing. In other words, if you have to go out on a loss, that was the kind of last impression you want to leave fight fans.

“I never saw that fight,” said Hardonk of the Barry bout. “I was so disappointed in myself, I couldn’t watch it. Maybe I should watch it one of these days.”

He should, because it was a good one. That won’t be the fight in his personal time capsule though. Instead, he refers to his 2008 bout with Eddie Sanchez as the one he will remember the most.

“One fight that I think about a lot is when I fought back in London at UFC 85,” said Hardonk. “I fought Eddie Sanchez and I got really hurt in that fight. At one point he hit me right in the eye and it broke my orbital bone. I was dizzy, I fell to the floor, and he jumped on me to finish the fight, but I used my ground skills to survive and weather the storm. Then I came back and I knocked him out. That was definitely one of the fights that I think about a lot because I overcame myself that time. There are some guys that are extremely gifted. They have physical talent, they’re super fast, they’re strong, and sometimes have great technique. But it’s easy to be tough or look great when things go your way. But it’s hard to look tough and put on a great fight when you’re being dominated. It’s completely different.”

Hardonk showed he had the heart to compete in this game that night, and the Sanchez win was one of three in a row that saw him closing in on the elite of the game entering 2009. But after his back-to-back defeats, he decided that it was time for a new look in his life, and that’s where he’s at today – at peace.

“At the end of 2009, I wasn’t happy with the way things were going, but I didn’t want to give up on fighting,” he said. “I love fighting and I love competing. I love to go out there and test myself against the best in the world, and it’s a great lifestyle. You only have to worry about yourself, you can be pretty selfish at times (Laughs), and I’m very passionate about the sport. So at first, it wasn’t on my mind to quit fighting. But I also always loved teaching and I think I have a natural ability for it and I’m always trying to help people. And if there’s something I’m good at, like fighting, I love to share and help people accomplish their goals. I think it’s something I always had in me, but I put it away because I put myself first and I wanted to enjoy this lifestyle and fight and compete and test myself. But taking that year off and focusing more on that other side and that teaching and coaching aspect of myself, I found that I get as much satisfaction from that as from fighting itself.”