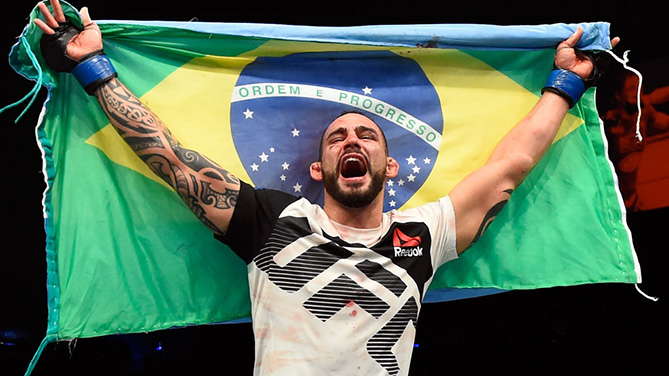 The road. It’s a familiar place for Argentina’s Santiago Ponzinibbio and has been for much of his life. So traveling to Glasgow, Scotland for his first UFC main event against Gunnar Nelson isn’t an issue for the welterweight contender. It’s just part of the job.

“I am happy about this and I deserve this main event fight,” he said. “I worked hard and suffered to get here. This is where I belong and this is where I need to be.”

Now making his home in South Florida, where he trains with the American Top Team squad, Ponzinibbio has been paying his dues in and out of the UFC. Whether it was leaving his home in La Plata to live and train in Brazil, winning four fights on The Ultimate Fighter Brazil before an injury kept him from the finals, or then moving to the United States to get the best training for a run at the UFC’s welterweight title, he’s sacrificed more than most to reach this point.

“For me it was very difficult because I went without resources to an unknown country,” he said of his first move to Brazil. “I had no money, no place to stay, no contacts, and I didn’t speak the language. This suffering was the key to get to where I am now. If I hadn’t left the comforts of home to pursue my dreams, I wouldn’t be where I am now. I left home ten years ago with one objective: to pursue my dreams at the highest level. Every day, I make my dreams into a reality by continuing to be a competitor with the best in the world.”

Those sacrifices have paid off. The 30-year-old has a 6-2 UFC record that includes four consecutive wins, and he’s currently ranked 14th in the world at 170 pounds. A win over the No. 8-ranked Nelson will likely propel him into the top 10, and while that’s when the fun begins, he still has to defeat the crafty Iceland native first and he’s confident that he will do so this weekend.

“I think he is a great fighter, a grappler, a well-rounded fighter, and he has solid foot work,” Ponzinibbio says of Nelson. “But I think I am better. I am here to fight the best in the world and I am here to beat them all.”

That means beating them wherever the fight may lead, so don’t expect Ponzinibbio to be intimidated by Nelson’s ground game, especially since “Gente Boa” has a jiu-jitsu black belt of his own.

“I am ready to beat Gunnar Nelson on his feet as well as on the ground,” he said. “I am deadly anywhere the fight goes.”

Ponzinibbio’s striking has garnered him the most positive notices, though, and that’s not surprising since boxing is in the blood of the Argentinean.

“It always called to me, and I love it,” he said of the sweet science. “I train in boxing every day and it’s a pleasure for me to represent a country rich in boxing culture. I am excited to display the love I have for this discipline.”

From Nicolino Locche and Carlos Monzon to Sergio Martinez and Marcos Maidana, if a fighter called Argentina his birthplace, fans knew they were going to see a fight. But more importantly, there is a never say die attitude that fighters from that part of the world carry, and Ponzinibbio is proud to also display that heart as well.

“I think my people are warriors and I represent that,” he said. I won a fight with my radius bone completely broken in the first two minutes of the fight. I finished the fight with one hand broken, and the other was raised in victory.”

That win over Leonardo Santos in the TUF Brazil 2 semifinals didn’t earn him a shot at winning the reality show, but it did introduce a fighter that has all the tools to one day wear championship gold. And if anyone hasn’t been paying attention to Ponzinibbio, he plans on bringing them on board this weekend.

“I will display my skills and my spirit in the Octagon,” he said. “This fight will be a beacon of MMA at the highest level, and the world will see that I am difficult to ignore. They are going to see the best version of Santiago Ponzinibbio they have ever seen.”
Save