Haqparast’s obsession is taking him places 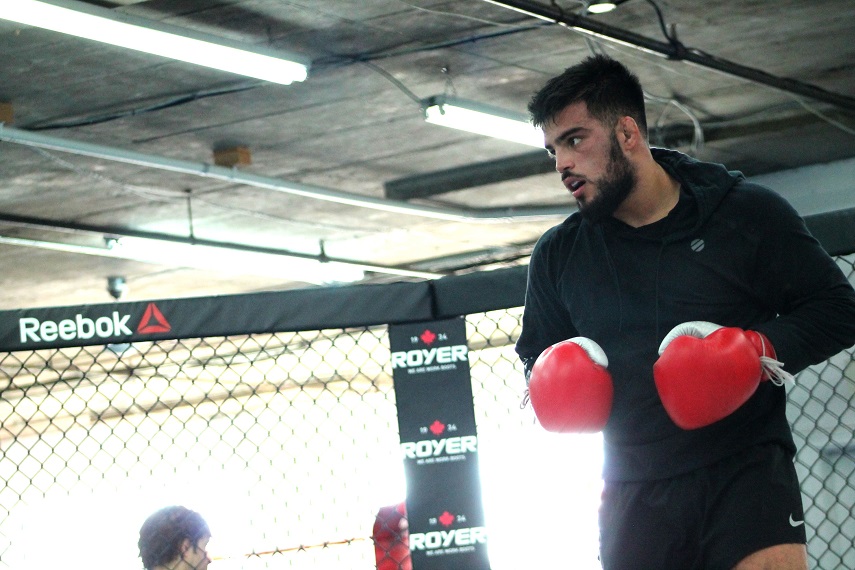 It’s the moments that no one witnesses that make a fighter stand out on fight night, and for Nasrat Haqparast, it’s the late nights at Tristar Gym that have been pushing him closer to peak shape lately.

At 11pm, with all the lights already out for the night except the ones above the cage, with no one at the gym except the white belt that is tasked with cleaning the mats, Nasrat Haqparast and his brother Hejo stand out in the dark, the machine-gun-like sounds of their pad work echoing through the empty room, drilling the very combinations that are supposed to shine in a much brighter spotlight come Saturday night when the real Octagon hits Moncton, New Brunswick for the first time.

That’s when Haqparast will meet Thibault Gouti on the preliminary card of UFC Fight Night: Volkan vs Smith, and to hear Haqparast describe it, their lightweight bout is primed to steal the show. As Performance of the Night, mind you, not Fight of the Night.

Had every fight that the 23-year-old from Hamburg imagined having in 2018 come to fruition, he would end the year in December having appeared in the Octagon five times. That’s not going to happen, though. Instead, it will likely end up being just two fights, with his sophomore appearance scheduled for this Saturday, just three months after his first UFC win in his hometown of Hamburg, when he beat up on Marc Diakiese for three rounds, against all odds.

“Five days after Hamburg, the UFC sent us a new offer,” Haqparast said, “and, of course, we accepted right away. Actually, we haven’t taken a break at all after that fight.”

And that’s just the way he likes it.

“I love to train, I love to fight. I can’t think of anything else. I love the feeling of being in training camp, preparing for that one big night.”

Today one year ago I had my UFC debut. With 10 days notice against one of the most experienced fighters in the lightweight division Marcin Held. Prior to that I won 8 fights via KO / TKO in a row. But this day changed my life. I lost a controversial close decision where many people thought i deserved the win. Every day I remember this feeling. But I’m thankful for one of the „worst“ experience in my life because it woke up a fire and my obsession became unstoppable....
A post shared by Nasrat Haqparast (@nasrat_mma) on Oct 21, 2018 at 7:12am PDT

Preparing is what he’s been doing for most of 2018, even if the grind only amounted to one fight, as impressive as it may have been.

Originally scheduled to fight in London in March, his fight against Nad Narimani fell through the day of the event with both fighters already wrapped up and ready to go after it was discovered that Haqparast had caught a serious eye infection just days before. The two were supposed to run it back in May at UFC Fight Night: Thompson vs Till in Liverpool, but when the UFC’s second stop in Hamburg was announced, Sean Shelby made it clear that he wanted the young prospect to perform in front of his home crowd.

“I wanted to do both shows, but the UFC said seven weeks were too short of a turnaround in case I’d get injured in the fight.”

And perform was what he did, unloading on Diakiese for three rounds en route to a decision win that was as dominant as it was surprising for most. Before that, Haqparast had lost his UFC debut on ten days’ notice via close decision to Polish veteran Marcin Held in Gdansk. If anyone had doubted the young Tristar product’s potential after that setback, his win over Diakiese probably set that straight.

His success might’ve come with about a one-year delay, but now Haqparast is up and rolling and ready to rumble.

Next up, it’s France’s Thibault Gouti. Reaction to that booking, at least back home in Germany, was surprise, mixed with a grain of disappointment. No Top 15 opponent? No big name after besting a beast of Diakiese’s caliber in the fashion that he did?

“We can’t underestimate Thibault Gouti,” Haqparast said. “Maybe he hasn’t had his best moments in the UFC yet, but he got some big wins in other promotions.”

In fact, Gouti lost four of his five fights in the UFC, and among those setbacks are Olivier Aubin-Mercier and Chad Laprise, two fighters who are training or have been training alongside Haqparast at Montreal’s Tristar Gym. While Aubin-Mercier submitted the tough Frenchman, Laprise knocked him out, giving Haqparast the confidence that he’ll be able to repeat one of those results and get the vet, whose abilities are better than his record would suggest, out of there early on Saturday night.

“This has been the best camp of my career,” Haqparast said, eyes glowing. “This is going to be next level; I can’t wait to 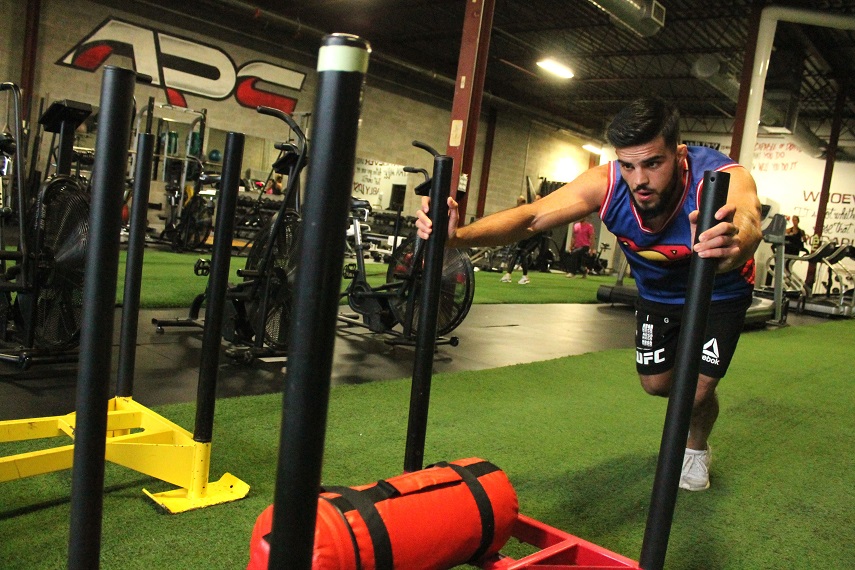 show what I’ve been working on.”

That being said, fights like these present a dangerous moment in any young prospect’s career. Just having notched the biggest win of their life, having come through against all odds, the temptation to take a lesser-known foe lightly is always looming in the back. That doesn’t count for Haqparast, though.

“It’s MMA, anything can happen. You can imagine things happening, but then something else happens. That’s why we don’t have a specific game plan, we just prepare for him as we’d do for any other opponent. We’re ready for anything.”

MMA is a young man’s game and the last year has been frustrating, but Haqparast, 23 since August, knows that he’s got plenty of time left.

“We’ve got a long path ahead of us,” he said. “We’ll take one step after another instead of going crazy right away.”

Gouti is that next step: Towards a top 15 opponent, towards the top ten, towards contendership, towards the belt, towards a lasting legacy, built on sparring sessions with the likes of Georges St-Pierre as well as those lonely nights at the gym when no one is around to watch.

“I’ll be completely honest: I believe I’m obsessed. I don’t think about anything other than this sport.”

The fruits of that mentality are now starting to show.

Still, the Haqparast brothers have been on the road this year, and that does take a toll.

“We’ve been home for eight weeks in 2018, of course you’re getting a bit homesick,” said Hejo Haqparast, who is a fundamental pillar of his brother’s success as both his travel buddy and his striking coach. “It’s time to get back to our family for a while.”

What better way to come back to Hamburg than with a win even more impressive than the one they got right there three months ago.