Haqparast hungrier than ever prior to London bout 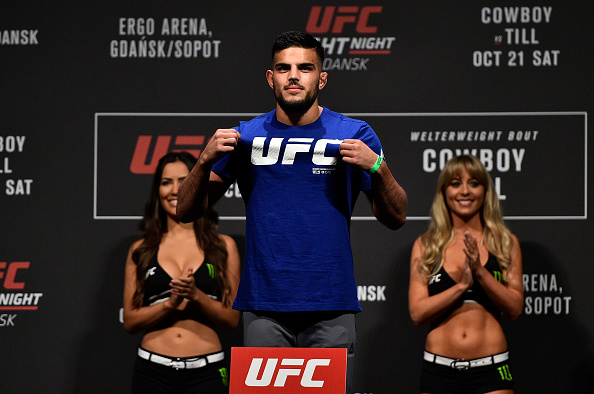 Nasrat Haqparast of Germany poses on the scale during the UFC Fight Night Weigh-in inside Ergo Arena on October 20, 2017 in Gdansk, Poland. (Photo by Jeff Bottari/Zuffa LLC/Zuffa LLC via Getty Images)" align="center" />
Fun, of all things, derailed Nasrat Haqparast’s UFC debut. Eight years after he had first stepped into a gym in Hamburg, Germany, he had made it into the Octagon – eight years filled with hard work and staying away from anything that wouldn’t get him closer to his goal of becoming the best fighter in the world.

Now that he had made it onto the biggest stage of all, he enjoyed the fruits of his labor – a little too much. Haqparast lost his first battle, but war has only just begun for the 22-year-old, who will make his second Octagon appearance this Saturday at UFC Fight Night London

“My life has turned around completely,“ the lighweight fighter said. “Sponsors have been knocking on my door, so that’s something I don’t have to worry about anymore. I can travel and really invest in my training – I was even given a car.“

That’s not too shabby for someone who began training in combat sports at age 14 because he was overweight. He really never planned on actually fighting for real, Haqparast said, but the sport just drew him in right away. After losing his debut, he knocked out eight opponents in a row. His aggressive fighting style and an accumulation of knockouts first got him attention in Germany and then on the international circuit

“The last few months before I got into the UFC were… I won’t say they were hard, but I prepared for a lot of fights that fell through,“ Haqparast said about the first half of last year, when his once so abstract UFC dream was slowly taking shape.

In May, an opponent left the arena when Haqparast was already warming up, “but that didn’t take my motivation; it made me even hungrier. But I didn’t know that the UFC would come calling that same year and I wouldn’t have expected it.“

When he got the chance, he grabbed it with both hands.

Circumstances were far from ideal when Haqparast signed his contract last October. After Teemu Packalen had withdrawn due to injury, Marcin Held needed a new opponent for his hometown gig at UFC Fight Night Gdansk. At that point, Haqparast’s management had been raving about him to the UFC for months, allowing them to put pen on paper with eleven days to go until the UFC’s sophomore foray into Poland.

“I’ve never felt better before a fight,“ Haqparast said. “Before I had gotten into the UFC, there had always been a lot of pressure: If I lost, I would’ve had to put another streak together to get into the UFC. The way to get there would’ve seemed even more unrealistic.“

When that pressure to not only think about the next fight, but also about the one after that disappeared, he thoroughly enjoyed the experience inside the Octagon. Haqparast had his moments against Marcin Held – he even seemed to have rocked the durable veteran during their fight – but he couldn’t put him out. After three rounds, the elite grappler had accumulated enough points on the mat to run away with the decision.

“Everyone thought Marcin Held was one of the best fighters in the world, and there was this guy, 8-1, hadn’t even beaten many good opponents… But you saw what happened in the cage. He had three times my experience, but I put up a good fight. There were 15,000 Poles booing me and I didn’t care, at all. I enjoyed fight week, the photo shoot, the interviews, everything. When I got my (Reebok) Fight Kit, that was a dream come true.“

The German left Gdansk with his second defeat, but he had gained tremendous respect for his spirited effort from those who watched it unfold.

That doesn’t mean that Haqparast is content with how the fight went, though.

“The biggest lesson is to not get lazy in a fight,“ he said. “Marcin Held took me down and I didn’t feel in danger. I might’ve enjoyed the whole experience a bit too much. I had three minutes on the clock and thought I’d be back on my feet in no time. The next time I looked up, the round was almost over.“

Next time, he’s shooting for an A.

The chance to do that comes this Saturday in London. “I said that I wanted three months for my next fight, so I could show up really prepared. And I got my wish.“

Haqparast said that in February. A few weeks later, news made the rounds that his opponent, Alex Reyes, was injured and wouldn’t be making the trip over to the UK. That left Haqparast in the very same position that his last opponent was in before UFC Gdansk. Taking Haqparast’s former role is Cage Warriors featherweight champion Nad Narimani, who took the fight on a week’s notice.

“He’s a champion and has beaten good guys,“ Haqparast said of his new foe. “He’s well rounded, but I can see weaknesses in his game. Physically and stylistically, he’s very different from Reyes, but they’re both human, with two arms and two legs, so they both can be beaten. I’m ready to face anybody.“

And so, Haqparast will be fighting after all. In London’s O2 Arena, no less, where, over the course of eleven years and seven UFC shows, stars such as Anderson Silva, Michael Bisping, Dan Henderson, Alexander Gustafsson and Matt Hughes have laced up the gloves.

“It is kind of frustrating because these things have happened to me so often in the past and I was hoping that they wouldn’t happen to me anymore once I’d be in the UFC,“ he said. “But that’s just the fight game, I’ve got to adjust and, God willing, I’ll put on the performance of my life.“

Haqparast can’t know what the future holds, but he’s got his long-term goals in place nonetheless. Nowadays, they’re much bigger than just shedding a few uneccessary pounds. Of course he wants to become champion, he says today. And he wants to enjoy the way to get there. Just maybe a little less during the fight this time and much more after he’s done under the lights.