Happier Gadelha Focused On Going After What She Wants: The Belt 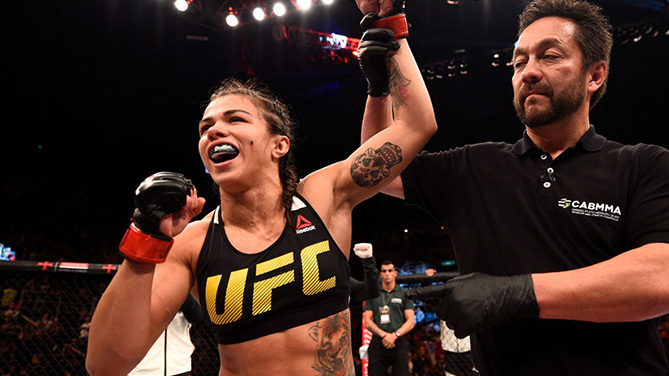 Claudia Gadelha was happy. Really happy. Yes, she defeated former world title challenger Karolina Kowalkiewicz in a little over three minutes in their June bout in Brazil, but it was more than that.

In effect, that one win proved that all the changes she had made in her life since losing her rematch with strawweight champion Joanna Jedrzejczyk a little less than a year earlier were working. And if that doesn’t produce a smile, nothing will.

“I am happier the way I see things now, the way that I live my life now,” she said. “I feel like I was a slave of the sport because everything I was doing in my life was to become a good fighter, but I don’t think I was training in the right way, the smart way. I was giving my all, but sometimes that’s not the right way. So I switched camps, I moved to America and I do things that I think are right for me.”

Gadelha’s decision to leave Rio de Janeiro and her longtime team at Nova Uniao was a shocker to many in the mixed martial arts world, but it was something necessary for the 28-year-old to do to find herself as a fighter and a person. That doesn’t mean it was easy.

“Big changes are so hard,” she said. “They hurt your heart, they make you miss people, they hurt you a lot, but you have to know what you want in life.”

What Gadelha wanted was not just to become the kind of fighter to dethrone Jedrzejczyk, but to do it as the captain of her own ship. So staying at home in Brazil wasn’t an option. She had to leave her comfort zone, and she soon found a home in Albuquerque, where her training home is at the Luttrell / Yee MMA & Fitness Gym. Two fights and two wins later, she feels that she’s back on the right track heading into her Friday bout against Jessica Andrade.

“Everything is coming together now,” Gadelha said. “It’s been a year that I moved to the States and of course I miss my family, my friends and my country, but I feel like life is better for me now and I feel like I’m getting better every day. I’m learning every day and becoming a new fighter every day and that’s very interesting and good to feel that way because I feel like I wasn’t getting any better in the last five years.

“I opened my mind and started to see a new way to do things,” she continues. “There are a lot of different ways to do a lot of things in life, but sometimes you only want to look at one way and you believe that’s the right way to do it, instead of opening your mind and saying, ‘Let me learn, let me grow, let me see what’s going on.’ And that’s what I did.”

We made it! We are in Japan. A gente chegou no Japão! #teamclaudia #ufcjapan #ufcjapao
A post shared by CG (@claudiagadelhaufc) on Sep 16, 2017 at 4:15am PDT

Already one of the top strawweights in the world, Gadelha sailed to a 12-0 record before a controversial loss to Jedrzejczyk in their first meeting in December 2014. A year and a half later, they met again, and once more it was a nip and tuck battle, this time over five rounds. But by the end of the fight, Gadelha was out of gas and Jedrzejczyk had finished strong, confirming the Brazilian’s decision that it was time to make a change.

“My first fight with Joanna, I thought a lot of things should change in my camp and I did change a lot of things, but I needed to grow a little more to be able to open my mind and learn new things,” she said. “And after my second fight with her, everybody saw that I gave it all, not only in training but inside the Octagon. But I got tired like I’ve never been in my life, and I felt so bad that I didn’t want to be there. ‘What am I doing? I don’t want to be here.’ And I knew that was from the wrong training. I knew it, I felt it, I knew something bad was gonna happen because I worked out too hard. It wasn’t smart.”

If Gadelha and Jedrzejczyk met a hundred times, each fight would likely be decided by the slimmest of margins. And for all the bad blood between the two, which reached its peak during the Ultimate Fighter season they coached against each other before the rematch, there is no question that there is a level of respect that can only be won in battle.

“You know when you have a big competitor?” Gadelha asks. “Joanna is my biggest competitor, and we have to keep getting better to beat each other. And after fighting her the second time, I knew I needed to change things in my life if I want to get better.”

She made the changes, and the Kowalkiewicz bout confirmed that she is getting better. Now it’s another test against Andrade, a fight that isn’t just important to Gadelha because a win moves her closer to another title shot, but because it is taking place in Japan.

“It’s a dream coming true for me,” she said. “I grew up in the BJJ philosophy, so I am all about the respect and the philosophy of the sport and that’s how everything works in Japan still.”

It’s a refreshing point of view and one that is a reminder of what martial arts truly means. Gadelha doesn’t need such reminders.

“Martial arts changed my life,” she said. “I was a little girl and I didn’t know what to do in life. I’m from a place that doesn’t give people a lot of opportunities in life, and that’s where I found myself. I grew up inside martial arts and that’s where I became the woman I am today. So I’m very thankful for martial arts and everything I got from it. I’m not only thankful, but I also want to help others. I want to do for people, I want to help the community, and I want to give back to the sport everything that I got.”

And she wants a third fight with “Joanna Champion.”

“I gotta focus on this fight (with Andrade), of course, but I have a goal and my goal is that belt,” Gadelha said. “That belt is my motivation, it’s what keeps me doing so much. I have business to handle this week and I’m very focused and concentrated on that, but I know that after September 23rd, me and Joanna are gonna cross paths again.”