Hans Stringer: Back to Brazil

"At the moment I see myself in the top 20, but of course as a newcomer I need to prove myself." - Hans Stringer 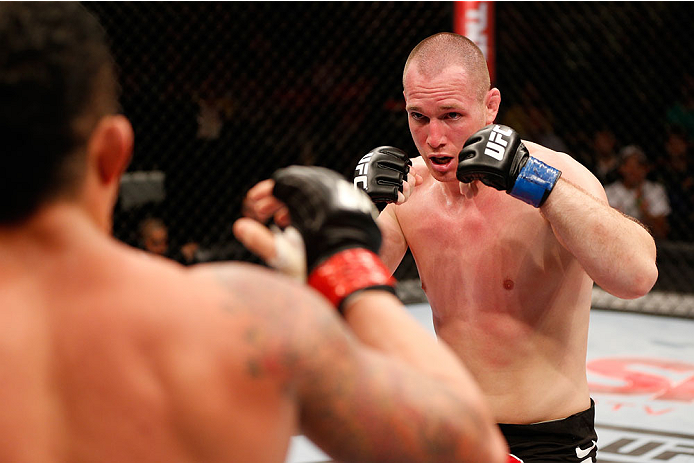 New York City produces point guards, the Dominican Republic is renowned for making shortstops, and the Netherlands routinely delivers the best kickboxers on the planet. UFC light heavyweight Hans Stringer, a proud native of Rhenen, took a different route to the UFC as a Brazilian Jiu-Jitsu black belt.

“I was lucky to start in one of Holland’s best Jiu-Jitsu clubs - Jiu-Jitsu Factory,” he said. “It was also one of Holland’s first Jiu-Jitsu clubs that had a Brazilian black belt - Cadu Francis - as a teacher who lived permanently in Holland, which helped the level of the club a lot. It's not the common way in Holland, but I started with jiu-jitsu and a year or so later started with kickboxing.”

Stringer had a couple kickboxing matches, but MMA was the direction he wanted to go in, and so kickboxing was strictly a way to evolve his stand-up game. And as an MMA fighter, despite his unconventional method of being introduced to the sport, he was pretty good, prompting him to leave college, where he was studying to become an electrician, to fight full-time. A decade later, he’s 27 and a UFC fighter preparing for a UFC 179 main card date with Fabio Maldonado.

“Obviously my parents weren't too happy about it,” Stringer says of the early days, “but in time they saw I was serious and that I always kept training, and I also taught MMA classes to make some money besides fighting. My parents are proud to see where I'm at now and I'm only at the start, going to the top.”

Unbeaten in his last seven bouts, Stringer made his Octagon debut in March, pulling out a three-round split decision win over Francimar Barroso that improved his pro record to 22-5-3. The fight could have easily gone south for him, as he was facing a Brazilian in Brazil, but he put any distractions out of his head and gutted out a big win.

“I've never minded being the underdog or fighting in my opponent’s country,” Stringer said. “It only gives him more pressure. I always prepare myself the best I can, just like I did last time, and in the third round I think I gave a bit more than him, which resulted in a win for me. I felt good entering the fight and didn't have more pressure than normal. Of course, the UFC is not ‘just’ a fight, but in the end it is ‘just’ another fight. It's only him and me inside the cage.”

On Saturday, Stringer hopes history repeats itself when he faces another Brazilian in Brazil, and perhaps this time might be even less of a strain on him mentally, considering that he’s already fought under the bright lights of the UFC.

“Last time was my first fight in the UFC, which brought some extra nerves.  But now I know what to expect.”

He also knows what to expect from Maldonado, a non-nonsense brawler who Stringer won’t have to look too hard to find when the bell rings in Rio de Janeiro.

“Maldonado is a tough fighter with the mentality rather to die than to give up, which makes him already very dangerous,” he said. “Besides his mentality, he is a good boxer who prefers to fight on his feet. But it's MMA and not boxing and I have the same mentality as him, so I see many ways to beat him.”

A victory over Maldonado would be huge for Stringer, considering that it’s on a Pay-Per-View main card and against the number 15-ranked light heavyweight. Stringer already sees himself as a top 20 fighter, with aims to shoot even higher this weekend.

“It's a tough division with a lot of up and coming fighters,” he said. “At the moment I see myself in the top 20, but of course as a newcomer I need to prove myself. But I feel that I deserve to be there and beating the number 15 will be a great start.”

It would be, and that’s pretty impressive for a Jiu-Jitsu black belt from the Netherlands.

“I always prepare myself the best I can,” Stringer said. “I never think of a fight as easy. Hard work pays off and I'm always trying to evolve and think of ways to make myself a better fighter. Luckily, I have a great team who always do their best to get the best out of me.”