Hamman Looking For A Fast Start Against Philippou

"I still want that mentality of I want to go in there and smash this dude...I never want to lose that edge." - Jared Hamman 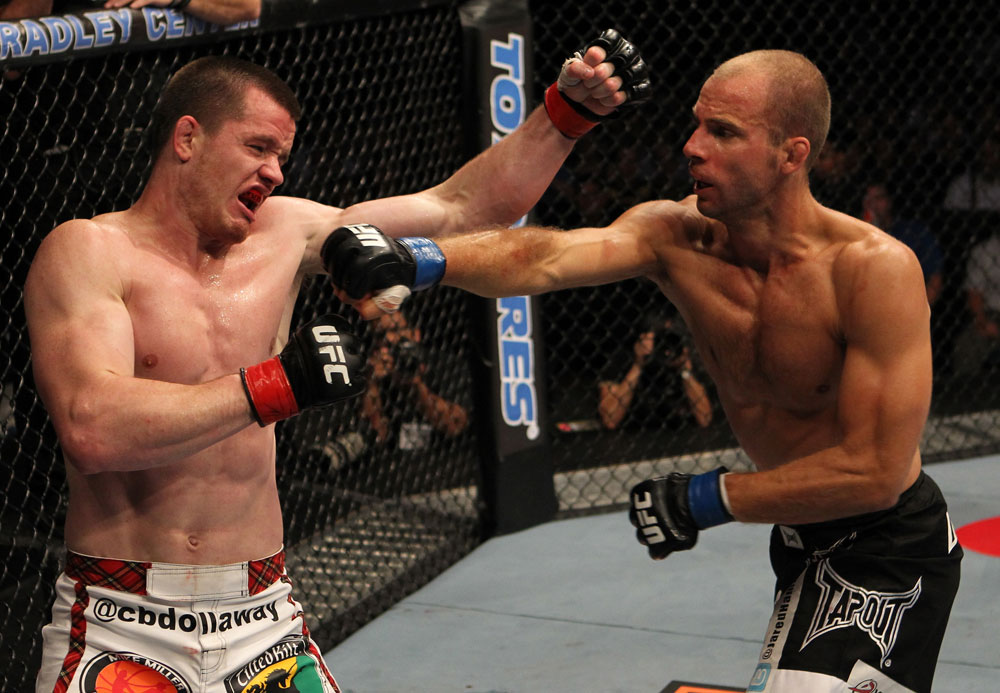 On August 14th, Jared Hamman sent a warning to the UFC’s middleweight division in the form of a second round TKO win over CB Dollaway and it was received loud and clear: he’s here and he’s legit.

After going 1-2 at light heavyweight, Hamman cleaned up his diet, pushed himself even harder as a professional athlete and dropped the 20 pounds to make 185. “My coaches, my nutritionist and my camp were phenomenal and everything worked out perfectly,” said Hamman, who was excited about entering this new weight class, a decision which forced himself to make lifestyle changes as far as eating and training. “It seemed like everything came together. My nutritionist had me on point, my strength and conditioning coach had me in shape and I was able to go against some really good wrestlers who had fought CB and been around CB. It was picture perfect.”

The Dollaway bout at UFC Live was simply a tale of two entirely different rounds. The first five minutes were wall-to-wall action from both competitors, which, in the end, seemingly favored Dollaway. “The Doberman” out-struck Hamman on the feet, took Hamman down several times, and had Hamman in what appeared to be a tight arm-triangle choke. But after all that, Hamman looked completely unfazed and wasn’t breathing hard heading into his corner for the break. Meanwhile, Dollaway looked beat with 10 minutes still on the clock, and his opponent was just getting warmed up.

“The first round was a little rough,” admits Hamman. “I kind of have to get beat up a little bit. I always feel like my first round is my hardest round to get into it. I feel like the second round is mine and the third round is for sure mine because of my conditioning and my cardio. It was kind of like how I played football where the first quarter was hard, but once I got into the second, third and fourth quarter it's go time. My coaches had me in such great shape that I knew I was ready to perform. I got cracked and I took it. I got kind of caught in the arm-triangle, but for the most part going through the first round I was thinking, ‘your time is coming’. Okay, you hit me and you tried to choke me out, but the second round is mine. I expected from CB that he was going to come after it and sure enough he did. At the end of the round, I slapped his thigh because I knew he had done a lot of work. He basically threw what he had at me and all I was thinking that I'm going to come after him in the second round. I felt like the second round was my turn.”

And it was. The 29-year old Californian took it to Dollaway by throwing well over 100 strikes in less than four minutes. The beginning 40 seconds of the round were basically a feeling out process, but once those first few punches landed, Hamman never stopped until referee Herb Dean pulled him off his foe. The majority of the round took place on the ground, with Hamman delivering a relentless attack from side control, which was at too high of a pace for Dollaway to keep up. Hamman impressively earned his first stoppage inside the Octagon against a well-regarded opponent in his new weight class.

“I want to end fights,” declares Hamman. “To me what's fun is to go in there for the kill. That's what makes MMA enjoyable for me. It is about going in there and making that opponent give up. I'll take the knockout or submission, but what I'm looking for is going in there and breaking that guy down and seeing who has the will. He put a lot of action into that first round and that's why I love the UFC because they put me in there with guys who love to fight. That was a great first round - you beat me up, let's get into the second round and keep this going. I felt so good going into that second round, it was like let's rock and roll. In the second round, when I felt that he was withering, that put a big ol’ smile on my face inside because I’m like my cardio feels great, I smell blood and I want to end this.”

For his next challenger at middleweight, Hamman will be traveling to the Great White North and taking on Costa Philippou in Toronto, Canada at UFC 140. The former professional boxer from Cyprus made his UFC debut on five days’ notice earlier this year at UFC 128 in a decision loss against Nick Catone. He re-entered the Octagon six months later after a full training camp and defeated UFC veteran Jorge Rivera at UFC 133 by split decision. The product of the Matt Serra and Ray Longo Long Island fight team is clearly durable, determined and ready to bring the fight for all three rounds, which is how Hamman likes it.

“He is a short strong dude,” says Hamman of his sub six foot opponent. “He seems like another good guy. He's not a loud mouthed trash talking punk; he's a stand up dude. He’s the kind of guy I like to fight and I respect and I think is good for our sport. He has a hard head because I don't think anyone has finished him. He took Nick Catone to decision and he beat Jorge Rivera. He has a solid resume. I think he is going to bring it and I think it is going to be a good fight between us.”

Come fight night, Hamman will have the same three familiar faces (two to the UFC fans and one to himself) that he usually has: UFC light heavyweight Vladimir Matyushenko, retired UFC heavyweight and K-1 kickboxer Antoni Hardonk, and Hamman’s older brother. In spirit “The Messenger” will have his Brazilian jiu-jitsu coach Henry Akins, who is a black belt under Rickson Gracie, cheering him on. Besides all their renowned tutelage, Hamman has also been preparing for Philippou at the Grudge Training Center in Colorado with Trevor Wittman, Brendan Schaub, Nate Marquardt and Eliot Marshall.

“As far as training partners go, where I'm at in California there are not a whole lot,” tells Hamman. “I have great coaches who are great at teaching technical stuff, but they don't have too many people for me to go against. I made the decision to come out to Colorado because they have a bunch of guys who are highly motivated that are very skilled and they put it on me. I'm always coming to bring it in fights and I don't think I'm a slow starter as far as pressing the action, but it takes me that first round to get into my groove. That's one of the reasons I came out to Colorado because these guys are super good and super technical and you can't take a round off against them. You have to be on your game every single sparring round you have against them. To have guys where you can't be lazy against them and you have to be focused from the first bell to the last bell is how I work on that. To get ready for a fight there is not a better place for me.”

To fans, Hamman has obviously grown as a fighter inside the cage, but, to himself, Hamman knows he has also grown outside of it by accepting and understanding the ever expanding media attention that comes with being in the UFC. “It came to a point with the CB Dollaway fight that I really came to grips with the whole idea of interviews, Twitter, Facebook fan page, and all these things that are like ‘what the heck does this have to do with the fight,’” says Hamman, who wasn’t comfortable being a center of attention initially, but is beginning to enjoy it more. Plus, he knows the greatest publicity will always come from a victory inside the Octagon. “The best exposure for myself is to win fights. I'll never overlook that. My training trumps and comes before any of the media stuff any day.”

The debut at middleweight and the TKO win over Dollaway weren’t the only headlines Hamman grabbed this year. In what is positively a first for the UFC, Hamman had a bottle of wine designed for and about him by the wine club from the Hill Family Estate in Napa Valley. “The Messenger” cabernet sauvignon is a part of a staining project that has also been done for athletes like Tom Glavine, Greg Maddux, and Rick Ankiel. It’s no doubt a surreal and very cool experience for the 13-3 middleweight, who jokes, “It is like the Wheaties box of the adult age.”

On December 10th at UFC 140 in Toronto, Hamman is looking to dish out another fight finishing performance against the rough and ready Philippou. He has easily become a fan favorite with his aggressive and non-stop combat style, which earned him two “Fight of the Night” awards in 2010 against Kyle Kingsbury and Rodney Wallace. Now with Hamman competing at his proper weight class, he is champing at the bit to get into the Octagon and give the fans something they can enjoy. No one can explain that point better than the man himself.

“I remember how I felt that first fight,” states Hamman. “You're not thinking about anything else - the media or the crowd. You're just thinking, I'm going to fight this dude and I'm ready to bring the ruckus. Nothing else matters because I'm going to go after this guy with all I have got. Sometimes in the UFC, there are guys who are so worried about losing that they get passive and it turns into a boring fight. It turns into that I don't want to watch this, they're not going for the kill, they're not going for the finish. Five years later, I still want that mentality of I want to go in there and smash this dude. There is more technique involved and the fighters are more skilled and there is a lot more to it now. But I never want to lose that edge of I'm going in there to fight. If I did lose that edge I would probably quit because it wouldn't be fun for me. Five years later, I want to have that same mentality from my first fight - I don't want to lose that motivation and that sense of purpose.”

Basically, if Hamman isn’t immersed in a high-octane dogfight then he’s not happy, which is a good message to the fans and bad one for his would-be opponents.